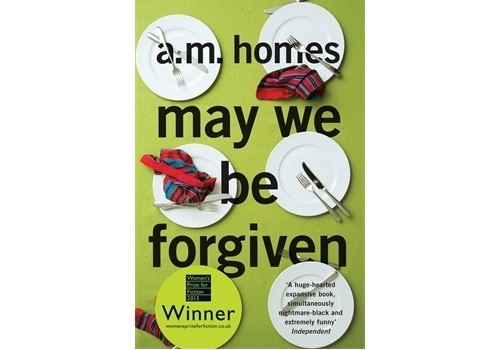 May We Be Forgiven by AM Homes

Blurb: Harry is a Richard Nixon scholar who leads a quiet, regular life; his brother George is a high-flying TV producer, with a murderous temper.They have been uneasy rivals since childhood.Then one day George’s loses control so extravagantly that he precipitates Harry into an entirely new life. In May We Be Forgiven, Homes gives us a darkly comic look at 21st century domestic life – at individual lives spiraling out of control, bound together by family and history.The cast of characters experience adultery, accidents, divorce, and death. But this is also a savage and dizzyingly inventive vision of contemporary America, whose dark heart Homes penetrates like no other writer – the strange jargons of its language, its passive aggressive institutions, its inhabitants’ desperate craving for intimacy and their pushing it away with litigation, technology, paranoia. (Granta)

“AM Homes is a masterful dissector of modern American life. She excels in portraying the minutiae of a dysfunctional family (is there any other kind?), creating characters who are both repellent and magnetic. Her writing exerts a push-pull that feels like being in a hall of mirrors. You want to run away but you find yourself compelled to look at the reflection.”

“Being a clever American novel, this is also a hand-wringing examination of the American dream – here with Nixon and the legacy of his corruption cast as a symbol of the nation’s current dark night of the soul. The Nixon material will resonate more with American readers, but wherever you live, Homes’s sharp, detailed prose will teem with gloriously free, un-airbrushed life.”

“If that sounds downbeat and depressing, it’s far from it. Homes is a very, very funny writer, brilliant at pinpointing the ridiculous nature of 21st-century living, and May We Be Forgiven has something of the feel of Catch-22 or The World According to Garp. Homes is a more engaging and empathetic writer than either Joseph Heller or John Irving, though, and she is immensely readable – I raced through these 480 pages faster than anything else I’ve read this year.”

“To call May We Be Forgiven “compelling” would be an understatement; it is a novel as compulsive as its characters … Homes’s dialogue is clever – and cleverly irritating: it resounds with the too-quick responses and shallow humour of a sitcom. (At Jane’s funeral, a woman identifies herself to Harold as his late sister-in-law’s hygienist. “We used to have wonderful talks,” she says, “well, mostly I talked, she had the saliva sucker on, but she was a good listener.”)”

“What consoles, in the secular non-sublime? For Homes, it seems it is love and whatever family you can muster. His porn days behind him, Harry develops a genuine bond with his nephew and niece, Nathaniel and Ashley. Homes’s portrait of Nathaniel – full of youthful schemes, spitting out polysyllables – is subtle and moving. Approaching his bar mitzvah, Nathaniel decides, for baroque reasons, to shift the celebrations to a tribal village in South Africa. At this point, Homes nearly loses her venture to anomalous restraint and near-schmaltz. Yet she gathers herself again for a clever twist, which I shall tactfully omit to describe.”

“There is something oddly unified about all the voices in this novel. People speak in short sentences; their diction is blunt and confident. They share a child-like tendency to reveal intimate details of their lives. Indeed, at times they feel like aspects of the same character. This can be frustrating. But, cumulatively, it conveys a powerful message: modern Americans have become narcissistic and unfeeling. We are in big trouble. Homes looks at all this with a humour that is flavoured with despair.”

“Clearly this is supposed to be a farcical ride through the absurdities of modern America but the comedy founders for the simple reason that heart-warming satire is an oxymoron: the one cancels out the other. May We Be Forgiven is an able book – it is capable, likeable and readable – but it is like a drink that claims to be nutritious because it has 10 per cent real fruit juice, although 90 per cent of it is sugar. There is some real satire here but it is drowning in saccharin.”

“May We Be Forgiven is a very uneven novel, rickety, meandering and repetitive. There are far too many forgettable sub-plots and similar comic routines. Its recipe for redemption, as in This Book Will Save Your Life, involves an uneasy mixture of truism (be nice to children, animals, strangers) and kitsch (form friendships with immigrants who work at fast food outlets, listen to the wise medicine man). It is, however, often very funny, in a bad-taste way. Homes’s dialogue drives a lot of the action – and she’s very good at dehumanising sales patter, and smart, classic Hollywood-style rat-a-tat-tat exchanges.”