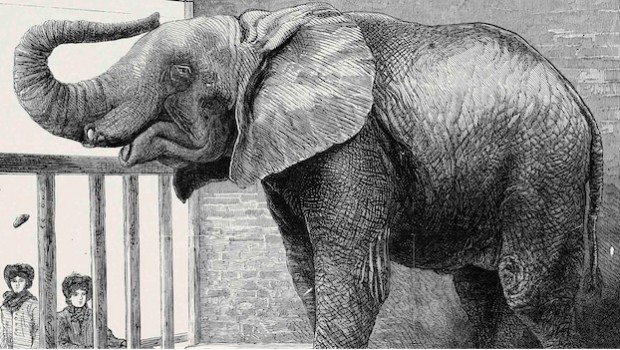 Jumbo: the Unauthorised Biography of a Victorian Sensation by John Sutherland

Blurb: The first comprehensive ‘biography’ of one of the first celebrity animals who gave us one of our favourite words.

Jumbo, Victorian England’s favourite elephant, was born in 1861 in French Sudan, imported to a Parisian zoo and later sold on to London, where – for seventeen years – he dutifully gave children rides and ate buns from their hands, all the while being tortured at night to keep him docile. Worldwide fame came when he was bought by the American showman and scam artist P.T. Barnum in 1881, despite letters from 100,000 British schoolchildren who wrote to Queen Victoria begging her to prevent the sale. Barnum went on to transform Jumbo into a lucrative circus act and one of the most loved animals of all time, establishing elephants as a regular feature of funhouses and menageries the world over.
Using the heartwrenching story of Jumbo’s celebrity life, tragic death in Canada in 1885, and his enduring cultural legacy, Jumbo is personal and fascinating reflection on our cultural elephantiasis by one of our most distinguished literary-critical detectives, which is guaranteed to amuse, stimulate, provoke and delight in equal measure.

“Unauthorised biography is right: Sutherland reveals the truth about Jumbo, and the darkness of our own underbelly too. I thrilled to read about Jumbo’s semi-erotic relationship with Matthew Scott, his keeper who entered into what addicts would call a co-dependent love affair… this book is so wonderful, so charming, I promise it will allow everyone to find the little Jumbo inside themselves.”

“Everyone knows the story of Dumbo, the cute baby elephant with large ears and an even larger heart, but few remember that his official name (Jumbo Jr) recalls one of the biggest stars of the 19th century. Fewer still realise that Jumbo the elephant’s story lies behind many features of modern life we take for granted, from “jumbo shrimp” to “jumbo jets”. In fact, as John Sutherland points out in his hugely entertaining survey of Jumbo’s sad life and strange legacy, Victorian “Jumbomania” also reveals our own peculiarly mixed feelings about a species we alternately coo over for its intelligence and butcher for its ivory. Jumbo, it turns out, represents an elephant in the room we still prefer to ignore. ”

“This isn’t just a book about killing elephants; it’s a book about being horrible to elephants in more general ways. It’s very good. It’s one of those books that shows you the world through the lens of a small part of it. Sutherland’s tone throughout is one of dry wit; the track where Jumbo died, he points out, was known as ‘the grand trunk’. Sutherland makes Jumbo his main character, and shows us that by looking at this elephant’s life, and the lives of other captive elephants, you can learn a lot about people too.”

“[A] delightful book… Jumbo is clearly a work of personal significance, and written with zest. Author and subject even have drinking in common: Sutherland is a (dry) alcoholic, and Jumbo was reliant on booze to stay calm. You will learn lots of amusing facts – elephants can hold two gallons of water in their trunks, which contain half a million taste receptors. And, like Sutherland, you will be dismayed by how we first abused elephants, and then threatened their survival.”

“[A] charming book… Prof Sutherland is a wonderfully engaging and learned narrator. After Jumbo’s death, mourned by no one more than poor Scott, the story loses its mojo, for at its heart it’s about an extraordinary relationship, impossible to imagine happening today.”

“Sutherland intersperses the tale with personal memories and ponders everything from the presence of elephants in Heart of Darkness to how much wine it might take to kill one. Pithy, wide-ranging and very funny.”

“It’s a fascinating story, told stylishly and wittily… One could argue that Sutherland has missed an opportunity for some deeper analysis of, for example, the connections with European imperialism, the elephant as a metaphor for more than safe flying, and humans’ ways of relating to the animal kingdom generally. But let’s not cavil. Jumbo works as a jeu d’esprit by a retired scholar who no longer has to bother about the judgments of his more snooty (or “theoretical”) peers, and so can please himself. If the result pleases his readers too, that’s justification enough.”

“The deaths of elephants in general, and their skinning, disembowelling and butchering, occupy much of this book. There are sickening descriptions of the “executions” of those that ran amok—slow deaths by shooting and hanging, quicker by electrocution. It is as if nothing less will do for exploding the “Jumbo” sham. Mr Sutherland can sometimes toy with his subject, like a learned circus-elephant picking up a sixpence. But the horrors poke through: in his section on Joseph Conrad’s “Heart of Darkness”, for example, and the ivory trade generally; and, more personally, on Jumbo the alcoholic (Mr Sutherland makes no secret of his own drinking history), and on his feelings as a big-eared, lonely and bullied child, when he first saw Disney’s film “Dumbo”. Jumbo as autobiography, perhaps?”

“The best of the details and juxtapositions are fascinating… But the narrative darts. Jumbo’s death takes place on page 134 of 277, not an impossible handicap for coherence but an indication of problems afoot. There are sloppy repetitions… It is a shame. Throughout there are glimmers of the book that might have been expected, given Sutherland’s distinguished back catalogue as a literary scholar, with entertaining elephant references from literary figures as diverse as Dorothy Parker, John Donne and the inevitable Rudyard Kipling.”

Jumbo: the Unauthorised Biography of a Victorian Sensation by John Sutherland The Omnivore