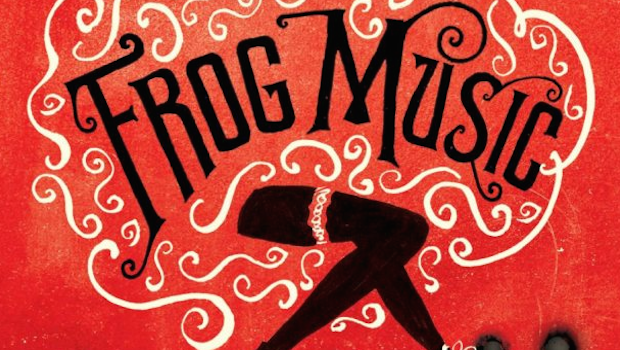 Blurb: San Francisco, 1876: a stifling heat wave and smallpox epidemic have engulfed the City. Deep in the streets of Chinatown live three former stars of the Parisian circus: Blanche, now an exotic dancer at the House of Mirrors, her lover Arthur and his companion Ernest. When an eccentric outsider joins their little circle, secrets unravel, changing everything – and leaving one of them dead. (Picador, March 2014)

Read an extract from Frog Music | The Independent

“Donoghue describes her previous three historical novels, Slammerkin, Life Mask andThe Sealed Letter, as a “trilogy of explorations of the British class system”. Maybe, but they are also high-octane historical intrigues, and it is this particular mix of the sociopolitical with the sensational that makes Frog Music a delicious, if somewhat disorienting, read.”

“Blanche’s fraught journey to independence is artfully structured through flashbacks, fast-forwards and moments of stillness. As the story twists towards and away from its central event, Blanche comes to see that most people are “a crazy quilt of fact and fiction”. The joy of it all is to watch Blanche becoming as fond of invention as Donoghue is. By the end, she has learnt to lie and enjoy it.”

“What Donoghue does brilliantly is bring a city, and an era, alive. San Francisco is, she says, “a roulette wheel that spins its human chips at random”, and we get a strong sense of the stakes in that game, for those who win and lose.”

“Frog Music, despite being distant in time and place from the events ofRoom, turns around many of the same concerns. It is, as Donoghue described Room in another interview, a “defamiliarisation of ordinary parenthood”, using historical fiction to consider some very modern issues. Blanche struggles to raise her child while doing a demanding job. She dithers over childcare for P’tit, trying to find a way of maintaining her lubricious lifestyle while dealing with the responsibilities that come with her success – money, a home, offers of ever more lucrative work.”

“Frog Music keeps us captivated because Donoghue has filled the foreground and background of this wild tale with irresistibly vivid characters. The woman who owns the dance hall where Blanche performs exchanges flesh for gold as efficiently as a modern day trader. Blanche’s finely dressed lover and his inseparable friend vacillate between wheedling and menacing, carousing about town before returning home drunk to exploit their patroness together. (Yes, crossdressing isn’t the only taboo stripped bare in these pages.)”

“Based on a sensational real-life murder case and punctuated with the words of contemporary popular songs, Frog Music gradually builds into a gripping tale of a woman’s struggle to survive in the anarchic, near lawless world of a frontier city and shows what a wonderfully talented and versatile writer Emma Donoghue is.”

“Emma Donoghue’s last novel was the gripping Room and there is the same sense of tension, of suppressed panic in this highly charged, elegant murder mystery. Blanche ricochets from one theory to another, convinced Arthur is the guilty party then doubtful that her spurned, erstwhile lover would exact such a terrible revenge … sad and saucy …”

“The novel is fast-paced and Donoghue’s talent for story-telling shows in her ability to jump around often without ever losing the reader. She also has a knack for description: both her characters and the world she portrays come alive in your mind … Frog Music won’t enjoy quite the commercial or the critical success of Room. But I hope it piggybacks a little on its predecessor’s success, being a novel that is lively, entertaining and well-written.”

“The first quarter of Frog Music is as ‘frail’ – ‘a namby-pamby euphemism for selling it ’ – as the women ‘of no character’ who people its pages. The drama of the post-murder strand is laboured … The novel does gather strength, however, and there are rewards for those who persevere.”

“Booker-shortlisted as [Room] was, and properly literary as Donoghue’s credentials are (she is a feminist academic as well as a novelist and playwright) there is perhaps something distasteful about capitalising on the public’s desire for sensation of that kind. In Frog Music, however (which is also based on true events), the neglect of babies plays second fiddle to some genuinely eye-popping scenes of graphic gay and straight sex, not to mention bloody murder, gruesome illness and every bodily function and obscenity a nice Irish lady such as Donoghue could imagine. This is definitely not a book to give granny on Mother’s Day … grubby”