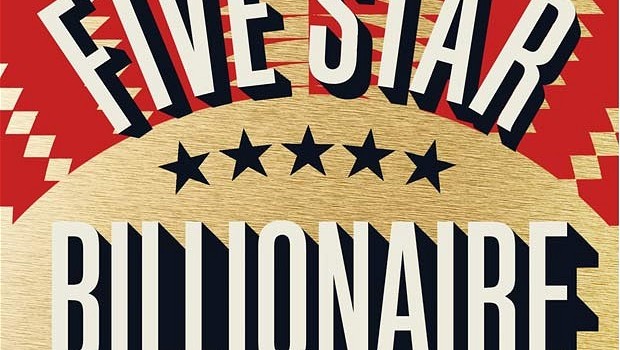 Blurb: Justin is from a family of successful property developers. Phoebe has come to China buoyed with hope, but her dreams are shattered within hours as the job she has come for seems never to have existed. Gary is a successful pop artist, but his fans and marketing machine disappear after a bar-room brawl. Yinghui has businesses that are going well but must make decisions about her life. And then there is Walter, the shadowy billionaire, ruthless and manipulative, ultimately alone in the world. In ‘Five Star Billionaire’, Tash Aw charts the weave of their journeys in the new China, counterpointing their adventures with the old life they have left behind in Malaysia. (Fourth Estate)

“There is wit here, and plenty of acute observation and characterisation … But there is also much heartbreak about what could so nearly have been. For none of Aw’s characters is two-dimensionally bad; they are just flawed men and women whose ultimately fruitless pursuit of happiness is enthrallingly and sympathetically narrated. If there is a villain, it is the city itself and the inescapable cold avarice that is a part of its very atmosphere. ”

“The unputdownable story of how these lives interconnect and touch upon the billionaire of the title, a shadowy avenging angel, is played out against the noisy, glitzy backdrop of a society on the cusp between abandoning old values and embracing a lifestyle as flashy as its neon glow.”

“As a title, Five Star Billionaire is close to brash, and the book’s storyline could persuasively be pitched to a producer in search of a blockbuster miniseries, but the reading experience it offers is coolly engrossing – with elements of frustrating evasion – rather than propulsive. Tash Aw doesn’t exactly kill plot momentum or the emotional impact of the situations he creates, but he certainly keeps them in check. Narrative hints are often indirect, like clues in a detective story, as when a passing reference to a character having written an article deploring the architecture of Gaudí suggests that a conversation almost a hundred pages earlier wasn’t in fact spontaneous.”

“If the messages regarding the hollowness of material gain and the instability of personal connections are not new, Aw’s style – terse but tender, lightly ironic without being snide – is fresh, bracing and, above all, compassionate. His characters, though shy and private people, form profound impressions on the reader. One simply cares deeply what happens to them, and this skilled writer never makes that an easy matter to predict.”

“Aw is a master storyteller and Five Star Billionaire can be read as The Way We Live Now for our times, for with the global triumph of capitalism, New York and London pale in comparison with the financial behemoth of Shanghai. Like Trollope’s Augustus Melmotte, the mysterious Walter Chao has moved his base of operations to the new city: Phoebe, Yinghui, Gary and Justin stand in for the speculators and wealthy families ensnared by his plotting. At 400-plus pages, Five Star Billionaire is only half the length of Trollope’s masterpiece. Still, it’s a long book; and if there’s a criticism to be made it is that the pace is too unvarying.”

“Aw is at his best when investigating the complex social strata of Shanghai and the aspirations of its newcomers. But the scale of the narrative and juggling so many storylines becomes overwhelming for the reader, and Aw creates another problem: Five Star Billionaire is so intent on reaching a particular, admittedly intriguing, conclusion – involving a long-deferred revenge – that the characters are frequently unconvincing and formulaic as they move towards the denouement.”

“This level of interconnectedness would stretch verisimilitude were the book set in Ambridge, let alone a city of 23 million, but this, I suspect, is the point. As the chance encounters pile up, you realise that the realism is being undermined on purpose: it is an inauthentic story for inauthentic lives. The characters struggle to feel things and can’t ever pin down Shanghai, where there is no order, nor plan.”

“Taken together, Aw’s characters provide a finely detailed group portrait of living in a city that “held its promises just out of reach, waiting to see how far you were willing to go to get what you wanted”. The author’s plotting proves less successful. His elaborate chore­o­graphy of his cast can feel forced as he comes to rely too heavily on coincidences and chance encounters to bring them together. There is a leisurely, even ­meandering quality to his story that often sets it at odds with the turbo-charged metro­polis in which it is set.”

“Long before the end, the book begins to feel dispiritingly under-imagined. We’re told too often what conversations are like – awkward, cheery – rather than given the dialogue that might enable us to judge; emotions are asserted but unfelt; and the business of moneymaking, around which so much of the novel revolves, is always discussed in the sketchiest terms: a big property deal at the heart of the book is annoyingly unconvincing. ”