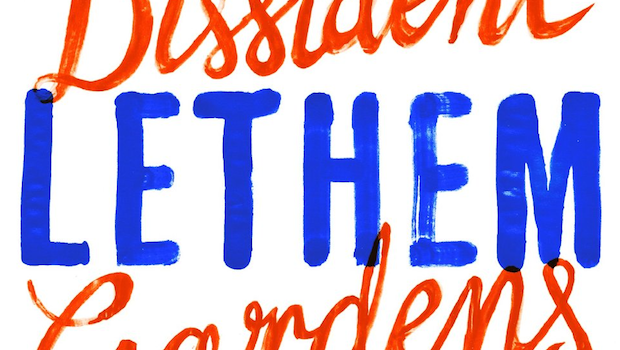 Blurb: In 1955, Rose Zimmer got screwed. It wasn’t the first time, and it wasn’t the last. In fact, Rose – like all American Communists – got screwed by the entire twentieth century. She doesn’t take it lying down. For over forty years she pounds the streets of Sunnyside Gardens, Queens, terrorising the neighbourhood, and her family, with the implacability of her beliefs, the sheer force of her grudge. And the generations that follow Rose will not easily escape her influence, her ire, her radicalism. Foremost among these is Miriam, Rose’s charismatic and passionate want-away hippie daughter, who heads for the Greenwich Village of the Sixties; her black stepson Cicero, an angry debunking machine; and her bewildered grandson Sergius, who finds himself an orphan in the capitalist now. (Jonathan Cape, January 2014)

“Wound from the start like a coiled spring, throbbing with appetites unsated, peopled with complex passionate political Jews, intricately patterned and alive to the history of its form, Jonathan Lethem’s new novel might, were the action transplanted across the Hudson from mid-century Jewish Queens to mid-century Jewish Newark, pass for one of Roth’s own.”

“Lethem has written a brilliant, funny, compendious novel at whose heart lies a sharp, slim blade of thought and style. It is the quality of his perception, his empathy, that makes this material new: that sharpness is the sharpness of a mind at work, re-radicalising a radical era with notions both literary and political that are outside itself.”

“Written with argumentative brio and immense stylistic fireworks,Dissident Gardens sometimes can overwhelm itself with its linguistic bravado and narrative density. It is a literary ride worth taking, as Lethem is grappling not just with a history of radical America, but also with the inherent loneliness at the heart of any life lived outside the mainstream.”

“The novel grudgingly admires Miriam’s hippie generation but at the same time it takes issue with it, and with the America of the latter half of the 20th century, for refusing to understand that the injustices of the past are still playing themselves out. Hard material to wrangle, especially as Rose’s charisma and political zeal wrestle the book to the ground and stand atop it, hammer and sickle waving. I was heartened to see her dominate these pages. Women like Rose aren’t often protagonists – they are absent, or they are punchlines.”

“As a story about a family of bitterly disappointed communists in a country that treats them as invisible anachronisms, Dissident Gardens is a supremely peculiar tale. But as a story about a quarrelsome family entangled with impossible ideals, it’s touchingly universal. The book doesn’t so much give us a traditional plot as the pieces to assemble the decades-long arc of Rose’s family … a few sections get snarled up in ruminative clarifications of increasingly abstract points. At such moments, the dramatic impulse evaporates, and his prose, often so vigorous, can sound clotted and overwritten.”

“In Dissident Gardens, Lethem points to a diminishing sense of radical politics in the city. He celebrates the right to fight the good fight, regardless of the results. That Lethem can write about all of this without it feeling like a whiney declinist rant is one of the book’s big achievements. A tragi-comic epic about New York Communists might have made for stolid reading but Lethem turns it into a fiction of vigour, humour and poignancy. It’s not his best work however, lacking the antic invention of Motherless Brooklyn and the exuberance, ideas and great story-telling of The Fortress of Solitude“

“Dissident Gardens seamlessly weaves together three generations, yet it doesn’t broadcast itself as a multigenerational epic, nor is it afflicted by the desire to pose as the next great American novel. It’s an intimate book. Some of the strongest passages feature minor characters.”

“This book’s male characters are much weaker than its women. Rose’s lover Douglas is more an aggregate of Commie-confounding characteristics than a flesh-and-blood black man. His son, Cicero, is swooped up by Rose at an early age and grows into a huge, dreadlocked, tedious professor in Maine, his college’s “miraculous triple token, gay, black and overweight.” As for “crummy, scummy Cousin Lenny,” he nurtures an unsavory crush on his cousin Miriam and argues vehemently for Queens to have a baseball team called the Sunnyside Proletarians. Lenny is also a numismatist and chess aficionado. His description of his match with Bobby Fischer is one of this book’s too-much-information moments, insofar as it stops to include Lenny’s diarrhea.”

“You certainly can’t fault Lethem for ambition. He has written an intricate, ironic fictional meditation on why communism failed in America, and what has happened to the US left since — scuttling off into the academy, frittering itself away in lifestyle protest and cranky fringe groups. So it is depressing to have to bring Dissident Gardens down to earth, with various prosaic objections. It tries to tell too many stories, and ends up being a collection of striking but disjointed episodes rather than a unified whole. The prose, though often spectacular, does not always justify the effort involved in digesting it.”

“Dissident Gardens has some obvious literary forebears – the now near-forgotten voices of early American socialism: Nelson Algren, Upton Sinclair and Michael Harrington’s epic The Other America. Although here we find one of the problems in Lethem’s project. The writers of the American left have historically concerned themselves with the lot of the working classes … It seems strange that a history of a movement that sought the emancipation of the proletariat should feature no proletarian voices. But this, perhaps, is Lethem’s point: it was because socialism remained the preserve of the urban intelligentsia that it never gained a foothold in the States … In the end, though, politics trumps plot, and those who are looking for a madcap romp like Motherless Brooklyn or a heartwarmingBildungsroman like The Fortress of Solitude will be left educated, certainly, rather less entertained.”