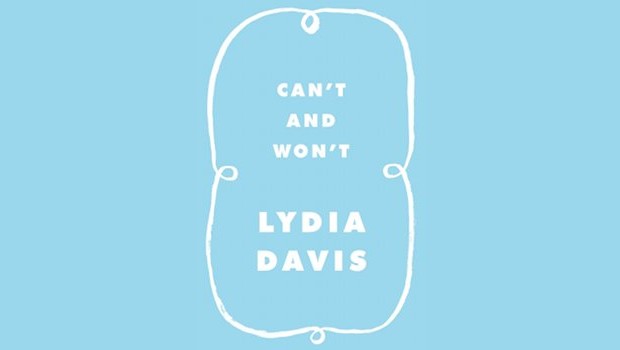 Can’t and Won’t by Lydia Davis

Blurb: With titles like ‘A Story of Stolen Salamis’, ‘Letters to a Frozen Pea Manufacturer’, ‘A Small Story About a Small Box of Chocolates’, and ‘Can’t and Won’t', the stories in this new collection illuminate particular moments in ordinary lives and find in them the humorous, the ironic and the surprising. (Hamish Hamilton, April 2014)

“Lydia Davis’s short-story collections tend to exceed the boundaries of a single book and become libraries. As you move among the pages, there is an effect of sampling the distinct contributions of quite a few writers … Come to this one-book library for the mercurial gifts of its author; stay because the stories continually renew their invitation to be read inventively.”

“The delight is not only in the detail but in the dogged audacity: how long can Davis string out her conceit this time? Yet there’s feeling here. “Local Obits” takes the form of another list – “Helena, 70, liked long walks”, “Anne, 51, enjoyed fishing and gardening” and so on. Among the deceased are an “avid sportsman”, an “avid golfer”, an “avid gardener”, and more than one “avid hunter”. Flaubert might have treated the exercise with scorn but with Davis you sense the shared humanity accumulating despite, or even because of, the newspapers.”

“To read Davis is to become a co-­conspirator in her way of existing in the world, perplexity combined with vivid observation. Our most routine habits can suddenly feel radically new … Can’t and Won’t is a more mournful and somber book than previous Davis collections. Calamity and ruin are always close at hand.

“Davis’s signal gift is to make us feel alive – not with pyrotechnics or fakery, not in grand dramas or confections whipped up for the purpose; but rather in her noticing of the apparently banal quotidian round, in records of our daily neuroses and small pleasures. These, she insists, are meaningful, and can be made new: these are the true substance of life.”

“In many ways, “Can’t and Won’t” is like a set of William Burroughs cut-ups, random moments juxtaposed, one against the other, until reality takes on the logic of a collage. Unlike Burroughs, though, Davis’ intent is not to rub out the word. Rather, language is what gives shape to the chaos, allowing us to invest existence with a shape.”

“One danger of the brevity and superabundance of Davis’s imagination is that her brisker exercises can skim unmemorably off the eyeball: “Learning Medieval History”, for instance. But when her genius for syntax is married to genuine emotion, then the results can be truly astonishing. In Can’t and Won’t, these emotions wheel ominously around death.”

“Get any idea you have of what a short story is/is not/should be out of your head. Take these, er, writings, as they come, slowly. You will snort with derision sometimes, laugh at others, shake your head in bewilderment occasionally, see a sort of point here and there. You will go back to a little gem that has wormed its way into your mind and stuck there, and discover that it is indeed a little gem, which sparkles a different way each time and flashes with a brief beauty or hidden meaning”

“Can’t and Won’t, like all of Davis’s remarkable work, is an open invitation to look as closely as we can at both literature and the world.”

“Davis’s apparently inconsequential observations are intended to challenge. The reader must look hard at the small amount of information given and work out the rationale behind its ordering.”

“One disappointment – though perhaps an inevitable one, given the overall tone of the collection – is that the funny stories aren’t quite as funny as I expected them to be. There are only hints of the uproarious brilliance of, say, “The Race of the Patient Motorcylists” or “Letter to a Funeral Parlour”. (Indeed, the new letters of complaint have the unfortunate effect of throwing into relief the superiority of the earlier offering.) It’s not necessarily a bad thing that Davis is less funny than she used to be; things change and, as “The Seals” demonstrates, her stories can work very well without humour.”

“She is, for sure, a master of sequencing. She mixes long and short dispatches to intoxicating effect, like a chef dealing out an illimitable tasting menu. But her longer stories, taken alone, are largely inert and possess a sameness of mood — you wouldn’t mistake many of them for the work of a major writer. Her planets need their satellites, or they fall from the sky.”

“In her approach to story-writing Lydia Davis might almost have taken a vow of chastity, of the aesthetic sort publicised by the Dogme 95 group of filmmakers. Dogme principles included shooting on location, recording the soundtrack at the same time as the images (so as to exclude music other than what the characters could hear), using natural sources of light and a hand-held camera. Davis’s equivalent asceticisms would be: keep invention to a minimum. Don’t develop. Don’t explore relationships.”

“In too many of these ­stories, a sort of cuteness becomes the dominant tone. Too often Davis’s brilliance is undone by a precious, almost winsome quality to her writing, and by her boundless appetite for whimsy.”

“Sorry. Can’t and Won’t is really a case of Didn’t and Wouldn’t — didn’t enjoy it at all, and wouldn’t recommend it.”

Can’t and Won’t by Lydia Davis The Omnivore