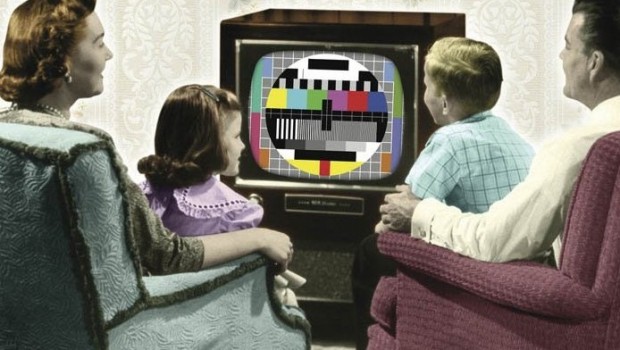 Armchair Nation: An Intimate History of Britain in Front of the TV by Joe Moran

Blurb: But what does your furniture point at?’ asks the character Joey in the sitcom Friends on hearing an acquaintance has no TV. It’s a good question: since its beginnings during WW2, television has assumed a central role in our houses and our lives, just as satellite dishes and aerials have become features of urban skylines. Television (or ‘the idiot’s lantern’, depending on your feelings about it) has created controversy, brought coronations and World Cups into living rooms, allowed us access to 24hr news and media and provided a thousand conversation starters. As shows come and go in popularity, the history of television shows us how our society has changed.

Armchair Nation reveals the fascinating, lyrical and sometimes surprising history of telly, from the first demonstration of television by John Logie Baird (in Selfridges) to the fear and excitement that greeted its arrival in households (some viewers worried it might control their thoughts), the controversies of Mary Whitehouse’s ‘Clean Up TV’ campaign and what JG Ballard thought about Big Brother.Via trips down memory lane with Morecambe and Wise, Richard Dimbleby, David Frost, Blue Peter and Coronation Street, you can flick between fascinating nuggets from the strange side of TV: what happened after a chimpanzee called ‘Fred J. Muggs’ interrupted American footage of the Queen’s wedding, and why aliens might be tuning in to The Benny Hill Show.As Alfred Hitchcock said: ‘The invention of television can be compared to the introduction of indoor plumbing. Fundamentally it brought no change in the public’s habits. It simply eliminated the necessity of leaving the house.

“All of this is recounted in meticulous and fascinating detail by Moran, who loves examining the mundane and the everyday, as his last book, On Roads, demonstrated. He adores fossicking around in those parts of our lives that occupy so much time yet so rarely get much attention, especially from academics. My only real disagreement is over Morecambe and Wise, who leave him indifferent.”

“No history can be exhaustive, so I suppose there’s no point complaining that Armchair Nation finds no room for my favourite American comedy of the 60s, Hogan’s Heroes; other readers may feel the launch of Channel 4 might have merited more of a fanfare than it gets here. But in its insights, clarity and honest wit, it’s hard to imagine a more engaging book on a subject everyone already thinks they know about. As in the best TV itself, you find yourself learning something new with almost no effort.”

“Moran’s achievement is remarkable given the breadth of subject matter: He uses archive material to quote ordinary people as well as eminent critics. Extensive research is lightly worn and accompanied by interesting, if repeating, ideological debates over the impact of TV on our souls.”

“The book is particularly good on how television straddled the divide between high and low culture. “My husband is now taking an interest in ballet, and I in boxing,” said one satisfied customer in 1954. Meanwhile, Stephen Spender found respite from the demands of modernism in Neighbours. Formidably well-researched and warmly appreciative without being too nostalgic, the irony of Armchair Nation is that it’s well worth turning off the box for.”

“Many, many writers have come a cropper trying to write well about the effects of TV. As well as being consistently perceptive in his observations, Moran has done something I would confidently have thought impossible – he’s made the history of British TV as dramatic as it is fun.”

“This richly detailed book, as profoundly nostalgic as scoffing Findus Crispy Pancakes or Bird’s Eye Potato Waffles, depicts a lost world of mass entertainment, before satellite and cable, reality shows and freak shows made people like me switch off for good.“

“[A] clever and enjoyable history … In his previous book, On Roads, Moran demonstrated an unrivalled knack for making you look afresh at everyday things you take for granted. Armchair Nation feels less surprising, since the history of television is relatively well-trodden ground. Still, Moran is a thoughtful writer with a refreshing penchant for debunking pop­ular myths.”

Armchair Nation: An Intimate History of Britain in Front of the TV by Joe Moran The Omnivore