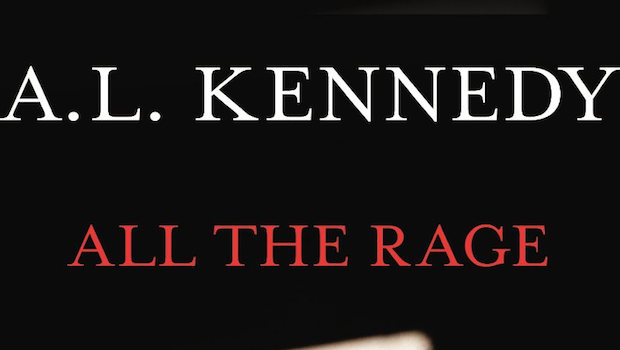 All The Rage by AL Kennedy

Blurb: Here, as before, lies the battlefield of the heart, where characters who have suffered disaffection, alienation or emotional damage somehow emerge – haltingly, awkwardly – into the astonishment of intimacy. And here, too, are the ones who will not shake off the hurt and the loss, who will not come through. The extraordinary title story takes place on a railway platform, with a couple waiting for a train that never comes, and opens out into the husband’s shocking admission of years of deceit, and a devastating portrait of a failed marriage, a failed man. Another story shows a woman who is, in every sense, lost and who finds herself – to her bewilderment and alarm – walking the aisles of a sex emporium holding an electric penis. There is great compassion here, and deep, dark humour, but also a stronger sense than ever before that the emotional paralysis can be loosened – that an impossibly uncomfortable lunch, say, between two apparent strangers, can culminate in a passionate kiss. ‘You do not know this man. He is practically a stranger. Only he’s not.’ (Jonathan Cape, March 2014)

“Her ear for the surreal details of a hotel breakfast, a first-date interior monologue, or a female-friendly sex shop, will have many readers weeping with suppressed laughter. But be warned, there is usually a killer punch within a page or two. You could say that these stories are laugh-out-loud sad.”

“What is wrong with the style of these stories – a vagueness, a groping quality, a lostness, a sparseness of physicality, a trapped interiority, a cerebral floating over the landscape as if few of the characters quite have their feet on the ground – is also what is right with them, what provides the collection its distinctive and identifiable voice. If we begin to yearn for narration that is firmer, clearer, sharper and more grounded, well, that’s what other people’s short story collections are for.”

“It is to the quartz, the originality of expression, we Kennedy readers tend to look, those turns of phrase, those glancing angles of fierce inward scrutiny that she brings to the task of unveiling loss and muted discontent. Don’t look for narrative completion or satisfaction. When it occurs, it is all  the more welcome and unexpected, as in this collection’s title tale, which  at 45 pages is compressed to a diamond glint, unfailingly inward, as is the shorter and more straightforward Run Catch Run, about a boy, Simon, and his dog, a spaniel who makes big eyes at him”

“Many of the stories are opaque, revealing themselves in layers. To double back is often to find yourself rewarded by startling twists or similes. She can also be funny. As befits someone who took up stand-up comedy late in life, Kennedy sporadically undermines all this melancholy lyricism with bracing humour: “Chocolate-flavoured condoms. They had chocolate-flavoured condoms. You like penises, you like chocolate, why not both? There were many whys for not both. For many reasons, my opinion was in favour of not both.””

“Pleasingly, we have to work out for ourselves what makes these characters tick. Often the explanation surprises. Kennedy dissects the small intimacies of inner thought and holds them palm-up, naked, there for our observation and evaluation. Her prose is typically direct, her sentences clear cut and yet capable of great tenderness.”

“Kennedy is brilliantly, painfully funny about the fault-lines and disaster zones of the typical relationship, and her writing is a model of elegance.”

“Kennedy’s circuitous structures typically suggest a mystery or crisis at their core, in fact gain their traction from the promise of a revelation, and where there isn’t one – or where it remains too obscure to discern – the manner of telling seems more habit or trick than necessity. Otherwise, this is a sure-footed and intelligently organised collection.”

“The star of the collection is a long central story, in this case about a cruel and wretched infidelity and its lonely aftermath. Anyone contemplating an affair with a married man (or, indeed, anyone wondering whether to marry a philanderer) would do well to read this tale, which offers a powerful corrective. There is comedy in it, but it stings. Describing a crying man she notes coolly: ‘He deserves no particular sympathy.’  None of her characters is sympathetic; even when Kennedy writes about children, there is never innocence or purposelessness. But her observations are startlingly good”

“Something feels off about All the Rage, her seventh collection. The lines seem more worked-on than before, the writerliness more pronounced, the grimness of the conclusions more mechanical. The prose never misses an opportunity to let you know all the thinking it’s been doing, or show you all the lugubrious bits of cliché it has sifted from the soil of common usage.”

All The Rage by AL Kennedy The Omnivore