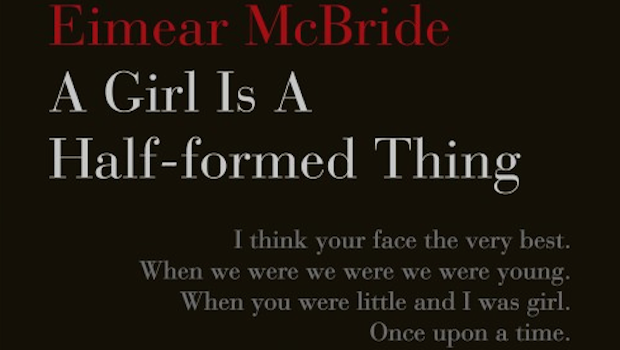 A Girl Is A Half-Formed Thing by Eimear McBride

Blurb: Eimear McBride’s debut tells, with astonishing insight and in brutal detail, the story of a young woman’s relationship with her brother, and the long shadow cast by his childhood brain tumour. Not so much a stream of consciousness, as an unconscious railing against a life that makes little sense, and a shocking and intimate insight into the thoughts, feelings and chaotic sexuality of a vulnerable and isolated protagonist, to read A Girl Is A Half-Formed Thing is to plunge inside its narrator’s head, experiencing her world first-hand. This isn’t always comfortable – but it is always a revelation. (Faber & Faber, April 2014)

“Eimear McBride is that old fashioned thing, a genius, in that she writes truth-spilling, uncompromising and brilliant prose that can be, on occasion, quite hard to read. Here, for example, are the opening lines: “For you. You’ll soon. You’ll give her name. In the stitches of her skin she’ll wear your say.” If this kind of thing bores or frightens you, then there are many other wonderful books out there for you to enjoy. The adventurous reader, however, will find that they have a real book on their hands, a live one, a book that is not like any other.”

“Less a stream than a fractured, fitful accretion of thoughts and sensations, it results in strange, often wonderful collocations: ‘Chew it lurks me’, ‘Scabby over slices where scalpels were’, ‘I retch up awful tickle giggs’, ‘Lie still and breathing. Go let traffic rock’. While the novel seldom strays from conventional sense-making, the moments where grammar is most firmly shaken up are often the most expressive: ‘Slap of everywhere smells kitchen powder perfume soap of hedges in the winter dogs and sawdust on a butcher’s floor.’”

“Readers who persist through the fug, though, will find themselves transported deep into the mind of the narrator, experiencing her reality in an uncannily tangible way. Scraps of colloquial speech are interwoven with tastes, sounds and memories: “Get a lungful of that in you and see how you do, she says cigarette filter fraying brown on her tongue. Thoo pthoo.” The stuff of the story is miserable and often sordid – the narrator’s brother has a brain tumour in childhood, with catastrophic effects on the whole family – but McBride weaves something dazzling from it, displaying huge ambition at a time when female writers are too often consigned – or consign themselves – to the chick-lit category.”

“Fractured though the sentences may be, there’s an immediacy, an emotional directness as the narrator rails against a frustrating, unfeeling world. Brave, bold, brilliant.“

“You only need to read the first paragraph of McBride’s debut novel to know you are reading something special. She builds up images impressionistically over paragraphs and pages, and her writing has such glorious cadence that it should be read aloud.”

“There’s a lot of give in every sentence, and a refusal to be bound by formal grammar. Her prose couldn’t reasonably be described as vague – perhaps indeterminate is the better word. There’s a reluctance to yield up exact meanings that is reminiscent of poetry, but she’s not lyrical, and she avoids the stasis that announces poetic moments, the halo of hush around beauty … If every book was as intense as this, reading literature would be even more of a minority pursuit than it is already. A Girl Is a Half-Formed Thing makes that rapturous lament By Grand Central Station I Sat Down and Wept look like Hotel du Lac. But then you wouldn’t want to go to Not I every night of the week. It’s hard to imagine another narrative that would justify this way of telling.”

“The story is told in broken sentences that falter, stumble and collapse. Fragments of thoughts collect like the scattered shrapnel of grief. The effect is exhausting – perhaps deliberately so, given the harrowing narrative. This is a demanding read, but not, perhaps, as radical as its admirers insist.”

“The obvious backdrop for the novel is Joyce and the author cheerfully admits that she began it as a “rip-off of Ulysses” before it took on a life of its own. The prose follows the way the mind works, not following things through in full sentences, but jumping from one thought to another, from one sensation to another. Indeed, the only entirely coherent passages are remembered prayers, which convey an occasional curiously lyrical quality to the narrative. The remarkable thing is that, given its apparent incoherence, the novel tells a coherent story”