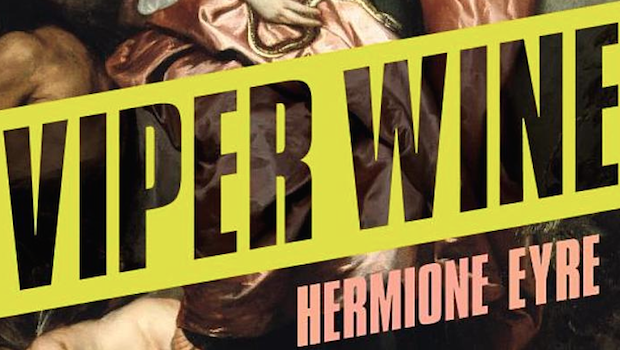 Blurb: At Whitehall Palace in 1632, the ladies at the court of Charles I are beginning to look suspiciously alike. Plump cheeks, dilated pupils, and a heightened sense of pleasure are the first signs that they have been drinking a potent new beauty tonic, Viper Wine, distilled and discreetly dispensed by the physician Lancelot Choice. Famed beauty Venetia Stanley is so extravagantly dazzling she has inspired Ben Jonson to poetry and Van Dyck to painting, provoking adoration and emulation from the masses. But now she is married and her “mid-climacteric” approaches, all that adoration has curdled to scrutiny, and she fears her powers are waning. Her devoted husband, Sir Kenelm Digby – alchemist, explorer, philosopher, courtier, and time-traveller – believes he has the means to cure wounds from a distance, but he so loves his wife that he will not make her a beauty tonic, convinced she has no need of it. From the whispering court at Whitehall, to the charlatan physicians of Eastcheap, here is a marriage in crisis, and a country on the brink of civil war. (Jonathan Cape, March 2014)

“The stylistic brio and and technical invention on display here is truly impressive.”

“Bold and wildly original, Viper Wine is an exuberantly witty play on the vanity and ghoulishness of the beauty industry, and a celebration of the unfading beauty of language. Eyre’s impersonation of early Caroline prose has perfect pitch; her sentences hum and trill with pleasure, and her words are as plump and strange as moonfruit. Hermione Eyre has injected new youth into the historical novel.”

“Hermione Eyre’s audacious debut novel Viper Wine takes the real events of England in 1632 – a country heading for civil war, the minds of its great men torn between magic and science, and its famous women, well they’re no different from those plastered over the covers of today’s magazines, obsessed with the latest beauty regime – transmuting them into a heady historical fiction fantasy mash-up … dazzlingly fresh and contemporary.”

“Eyre’s novel may have little that is immediately recognisable as a conventional plot, but it is an exceptionally clever and exhilarating excursion through Caroline high society, filled with echoes and anticipations of our own times.”

“Ultimately, the novel’s greatest achievement is not in its postmodernism (this can be slightly shopworn at times, as when Eyre appears as herself to declare, ‘I am the author’) but in its depiction of a marriage and, in particular, of Venetia, who learns too late that to predicate her happiness on her physical appearance dooms her to profound and intractable misery.”

“Viper Wine is a fable about the dangers of vanity in a puritanical era. Eyre’s manipulation of history is as funny as it is surreal – she frequently drops contemporary references (Jeremy Paxman and Jonathan Ross make an appearance at one point) to entertaining effect. It is both thematically and structurally ambitious, though there is a superficiality about the novel’s subject matter and characters that can at times be grating.”

“Hermione Eyre’s cornucopia of a novel opens a year earlier. As much a romp through the history of the times – the pre-Civil War court of Charles I;  the advances in the understanding of medicine – as a romance, it is also at times exasperating as it flits to the modern day to illustrate its point. But would I recommend it? Certainly.”

“Eyre has decided to pitch in references to the 21st century amid the coruscating wonder of the age, ostensibly through the flights of fancy to which Sir Kenelm’s mind is prone. They are not particularly intrusive – save for one “press conference” after Sir Kenelm’s return from a voyage of exploration, in which he is interrogated by the likes of “Paxman”, “Dimbleby” and even bloody Jonathan Ross. But if it’s just a brief mention of David Bowie lyrics coming across the airwaves or a reference to a performer called Streisand belting it out at the Queen’s masque, it’s an annoying conceit which interrupts the flow while you wonder why on earth it’s necessary.”