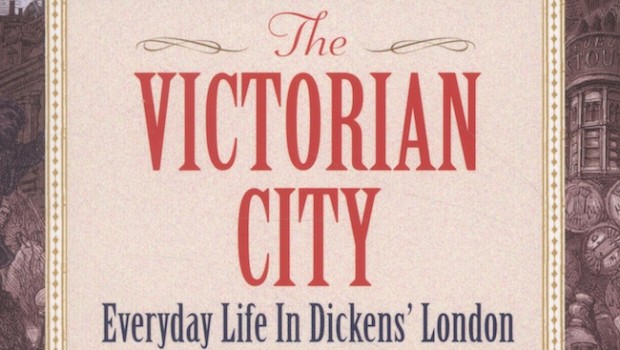 Blurb: The nineteenth century was a time of unprecedented transformation, and nowhere was this more apparent than on the streets of London. In only a few decades, London grew from a Regency town to the biggest city the world had ever seen, with more than 6.5 million people and railways, street-lighting and new buildings at every turn.

In The Victorian House, Judith Flanders described in intimate detail what went on inside the nineteenth-century home. Now, in The Victorian City, she explores London’s outdoors in an extraordinary, revelatory portrait of everyday life on the streets. From the moment Charles Dickens, the century’s best-loved novelist and London’s greatest observer, arrived in the city in 1822, he obsessively walked its streets, recording its pleasures, curiosities and cruelties. Now, with him, Judith Flanders leads us through the markets, transport systems, sewers, rivers, slums, alleys, cemeteries, gin palaces, chop-houses and entertainment emporia of Dickens’ London, to reveal the Victorian capital in all its variety, vibrancy, and squalor.

“She has a flair for an illuminating anecdote and each of the book’s four sections starts with a short description of an unusual incident in the history of the city, preludes that add colour and life to the narrative. The chapters bulge with fascinating observations, drawing on lively first-hand accounts from Dickens, Henry Mayhew, Arthur Munby, Alfred Bennett and others. The book is also refreshingly free from the theoretical over-complications that sometimes attend the topic. Flanders writes engagingly about everyday life in the city, with a kind of Mayhew-meets- Claire Tomalin documentary elan.”

“At the end of each chapter one gasps from the onrush of information, the pace of change, before being swept on to the next … There are citations here and there but she broadly allows her themes their own breathless space.”

“… at once meticulous and gripping … Flanders says that Dickens appealed to contemporaries because he gave them a voyage into the unknown: into parts of London they did not know and where they would not venture. She does something similar for us. The strangeness remains, but the voyage is unforgettable.”

“You do not have to be as interested in Dickens as Judith Flanders is to enjoy this lively work of social history. However, her book would make a superb primer for anyone about to read some of his novels, or who wishes to examine the points of correspondence between fiction and reality in the nineteenth century. The teeming, bustling, hand-to-mouth and often smelly facts of mid-nineteenth-century urban life have seldom been more vividly presented than in this book.”

“There are more scholarly books on the subject, and possibly more original ones, but nobody is as good at capturing what it was actually like to live in this messy human ant hill. Her book recreates the textures of everyday life with an anthropologist’s understanding of human behaviour alongside a storyteller’s eye for character.”

“Flanders has a superb eye for detail, and she supplies an expert commentary. What she doesn’t do is offer arguments … Readers are left to make judgments for themselves.”

“Flanders’s research is truly prodigious — and it is no doubt not her fault but her publisher’s that the reference notes are annoying to use. But for a writer as good and perceptive as Flanders is, this book at times seems slightly lacking in ambition. Using Dickens to show what London was really like is problematic. As a novelist and polemicist, he was under no oath to tell the truth. How far Dickens’s novels can be treated as reportage is a question that I wanted to know more about.”

“This is a book for enthusiasts and lovers of detail, and has excellent references. Its structure is loose, it has no narrative drive and no theory to propound, just a rich carnival of street life, showing a London as vicious as a ruffian at a bear-baiting and as jolly as a costermonger’s twopenny hop.”

The Victorian City: Everyday Life in Dickens’ London by Judith Flanders The Omnivore