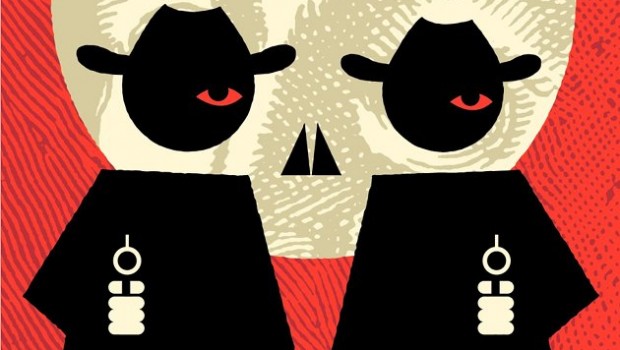 Blurb: Oregon, 1851. Eli and Charlie Sisters, notorious professional killers, are on their way to California to kill a man named Hermann Kermit Warm. On the way, the brothers have a series of unsettling and violent experiences in the Darwinian landscape of Gold Rush America. Charlie makes money and kills anyone who stands in his way; Eli doubts his vocation and falls in love. And they bicker a lot. Then they get to California, and discover that Warm is an inventor who has come up with a magical formula, which could make all of them very rich. What happens next is utterly gripping, strange and sad. (Canongate)

“Nothing in Patrick deWitt’s first novel, Ablutions, a laconic barfly’s lament for a dysfunctional life, could prepare you for his second, a triumphantly dark, comic anti-western; apart, that is, from the same devastating sense of confidence and glittering prose … The writing is superb, with each brief chapter a separate tale in itself, relayed in Eli’s aphoristic fashion. The scope is both cinematic and schematic, with a swaggering, poetic feel reminiscent of a Bob Dylan lyric, while the author retains gleefully taut control of the overall structure. ”

“… it is as funny as Ablutions, but has a much stronger narrative line, deeper characters and a vision of searing originality … deWitt’s great achievement [is] to match a narrator of such simple humanity to a tale of such lurid brutality.”

“Often blackly hilarious, this would make a tremendous film.”

“The bluff way with bloodshed may repel some, but this is a strong work, with tight prose in which not one syllable seems out of place.”

“… a compelling, subversive take on the Western genre with two very likeable characters at its core. ”

“… ostensibly a witty noir version of Don Quixote … DeWitt’s story is hugely entertaining. There are a few stylistic slips where modernity intrudes but on the whole deWitt keeps the period feel with great skill. The Sisters Brothers is not really an adventure story or a historical novel, however. It is a blackly comic fable about the usual wild west themes: emptiness, loneliness and the hollow lure of gold.”

“[An] unsettling, compelling and deeply strange picaresque novel … for all its wry playfulness, The Sisters Brothers is no comedy. The travails of the humane yet morally ambiguous protagonist in a hostile, lawless and unpredictable universe have echoes of Cormac McCarthy’s speculative classic The Road.”

“As the novel runs along, deWitt shifts the story in unpredictable directions, slowing the pace for a surreal finale in the woods that’s touched with alchemy. The black humor drops away entirely for what Eli calls in his earthy poetic voice, “a tangle of grotesqueness and failure.” After capturing the fireside camps and saloons in perfectly drawn vignettes, deWitt strips these two lethal brothers of more than they ever thought a man could lose.”

“This novel has little in common with DeWitt’s first, Ablutions … He has shifted here radically, successfully, to an entirely different time period, from a tale of solitude to brotherhood, from self-erasure to becoming more human. The only thing the books share is a skillfully polished voice and a penchant for gleefully looking under bloody bandages.”

“The atmosphere of cockneyed logic and freakish incident in this novel is reminiscent of the work of another pair of brothers – the Coens … The Sisters Brothers shares with O Brother, Where Art Thou? an episodic framework and borrowings from the Odyssey … Given the book’s scepticism about the comforts of storytelling, its dewy-eyed final pages seem to glib; but for the most part, The Sisters Brothers is well worth the ride.”

“A reader looking for meticulous depiction of Oregon and California in 1851, however, will have to look elsewhere. Eli barely gives the landscape a glance, and people met along the way are simple figures in his moral drama. Nor does Eli have any larger philosophical or sociohistorical insights to offer. His narrative style is flat and literal, which is perhaps supposed to be the hilarious part. ”

“Picaresques are by nature episodic, but this doesn’t justify a plot with so many anticlimaxes and dead ends. DeWitt seems to be fond of rescuing his characters from dire predicaments by means of convenient expedients, like gunmen falling out of trees, but is this parody or laziness? In addition, the novel’s deadpan dialogue occasionally suffers from slippage, and its portentous declarations can sound, well, portentous. ”