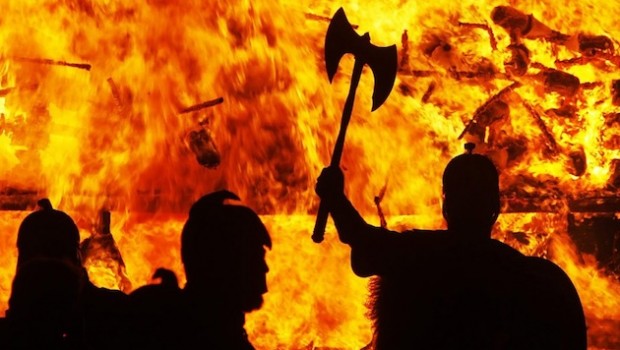 The Northmen’s Fury: A History of the Viking World by Philip Parker

Blurb: The Northmen’s Fury tells the Viking story, from the first pinprick raids of the eightth century to the great armies that left their Scandinavian homelands to conquer larger parts of France, Britain and Ireland. It recounts the epic voyages that took them across the Atlantic to the icy fjords of Greenland and to North America over four centuries before Columbus and east to the great rivers of Russia and the riches of the Byzantine empire.

One summer’s day in 793, death arrived from the sea. The raiders who sacked the island monastery of Lindisfarne were the first Vikings, sea-borne attackers who brought two centuries of terror to northern Europe. Before long the sight of their dragon-prowed longships and the very name of Viking gave rise to fear and dread, so much so that monks were reputed to pray each night for delivery from ‘the Northmen’s Fury’. Yet for all their reputation as bloodthirsty warriors, the Vikings possessed a sophisticated culture that produced art of great beauty, literature of abiding power and kingdoms of surprising endurance.

The Northmen’s Fury describes how and why a region at the edge of Europe came to dominate and to terrorise much of the rest of the continent for nearly three centuries and how, in the end, the coming of Christianity and the growing power of kings tempered the Viking ferocity and stemmed the tide of raids. It relates the astonishing achievement of the Vikings in forging far-flung empires whose sinews were the sea and whose arteries were not roads but maritime trading routes.

The blood of the Vikings runs in millions of veins in Europe and the Americas and the tale of their conquests, explorations and achievements continues to inspire people around the world.

“It is quite a feat to write history this good involving so many disparate peoples in so many places over such a long period of time, sifting evidence from such a huge range of historical and archeological sources to form a gripping narrative. But Parker has done it, and plaudits to him. Everyone who visits the British Museum’s Viking exhibition should go clutching a copy of this engaging and splendidly written book. ”

“The major problem with writing an accessible narrative history of the early Middle Ages is the period’s chronic instability. Such kingdoms and fiefdoms as did exist rarely maintained their borders for long, and inveterate feuding tended to ensure a regular turnover of power-hungry warlords — many of whom shared the name Harald. Yet there are treasures aplenty. Particularly fascinating are the visits that Parker makes to some of the less well-known areas of settlement — Frisia, for instance, where the largest hoard of Arabic silver in Europe south of Scandinavia was recently found, or the Isle of Man, where a cross with Odin on one side and Christ on the other commemorates an uneasy multiculturalism.”

“The Northmen’s Fury is a detailed study that succeeds in conveying the impact of the Viking Age. Moreover, it is fully up to date with recent archaeological discoveries and DNA findings in the Viking colonies. In all these respects, it is a fascinating read, but one cannot help concluding that it is more market timing, rather than the fact of having anything particularly new to say, that has prompted this study. This being the case, one might reasonably have expected the book to be free of errors, which it is not, most notably in references to the Old Norse language… Serious students are likely to wonder just how much of Parker’s narrative comes from first-hand study of the sources. These readers are likely to stick with Gwyn Jones’s history, for Jones was an Old Norse expert who could readily judge the reliability or otherwise of source material.”

The Northmen’s Fury: A History of the Viking World by Philip Parker The Omnivore