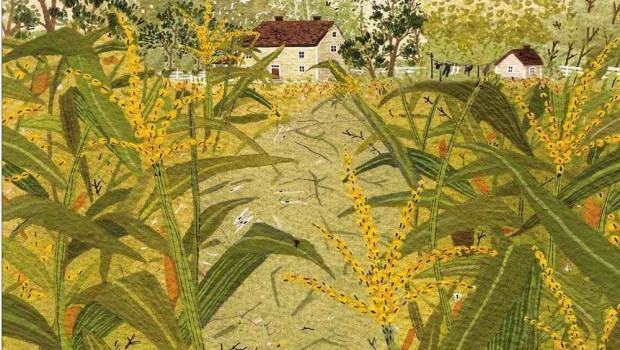 The Last Runaway by Tracy Chevalier

Blurb: When modest Quaker Honor Bright sails from Bristol with her sister, she is fleeing heartache for a new life in America, far from home. But tragedy leaves her alone and vulnerable, torn between two worlds and dependent on the kindness of strangers. Life in 1850s Ohio is precarious and unsentimental. The sun is too hot, the thunderstorms too violent, the snow too deep. The roads are spattered with mud and spit. The woods are home to skunks and porcupines and raccoons. They also shelter slaves escaping north to freedom. Should Honor hide runaways from the ruthless men who hunt them down? The Quaker community she has joined may oppose slavery in principle, but does it have the courage to help her defy the law? As she struggles to find her place and her voice, Honor must decide what she is willing to risk for her beliefs.

“Central to this tapestry is the character of Honor, precisely and beautifully rendered in the tightest of descriptive stitches. Those around her — Belle, her friend, Donovan, Belle’s brother, who hunts slaves for a living and almost steals Honor’s heart, the community of Quakers, Honor’s husband Jack and the individual slaves who Honor helps along their way to freedom — flow from Honor’s consciousness.“

“Chevalier takes a risk by creating a protagonist who is unassertive for long ­periods of the novel, but it pays off. Honor’s gradual awakening to what she decides is her duty, and her determination to do what is right, are given extra power because her character has previously seemed so passive.“

“Ultimately, however, it is two secondary characters – Mrs Reed, a free black woman and the milliner Belle Mills – and Honor’s relationship with each of them that lends imaginative fire to the story.“

“Tracy Chevalier, the bestselling author of Girl With A Pearl Earring, has found a subject that both fascinates and moves her and the result is this quietly powerful and gripping novel. “

“The characters spring from the page from the unconventional milliner Belle Mills, who befriends Honor immediately, her slave–chaser brother Donovan, the short–sighted but clear–sighted black woman Mrs Reed, and Honor’s grimly smiling mother–in–law Judith Haymaker. All help make this a gripping and potent novel which shows Chevalier at the height of her powers.“

“By coming at the evils of slavery from the female angle, Chevalier is both in tune with the zeitgeist, and more subtle than films such as Django Unchained or Lincoln. The Quaker community on both sides of the Atlantic had no hesitation in rejecting slavery – yet the cotton used in their quilts came from slave-farmed plantations, and the Haymakers, unlike the English Friends, suffered the consequences of supporting abolition. As historical fiction this is slightly too predictable, but as a serious novel about a genuine moral dilemma, it is highly recommended.“

“Honor’s naive efforts to help these runaways bring her into conflict with her new family and wider Quaker community, adding a strong moral undertow to this absorbing historical fiction.”

“The novel moves in uneasy fits and starts, lengthy periods of domestic quietude and quilt-making punctuated by bursts of melodrama. Honor’s long letters home are dull and slow the narrative, while Donovan, the charismatic and conscienceless slave hunter with whom Honor becomes entangled, appears to have stepped straight out of the pages of a penny romance. And yet The Last Runaway manages to insinuate itself … The Last Runaway is an uneven novel but one that lingers in the mind. “

“Chevalier immerses herself in period and place, and a wealth of domestic detail is deftly conveyed. Her research, as always, is meticulous and lightly worn. The Quakers are quilters, and much time is given to describing their traditional art. Honor finds the American style brash and simplistic; the other women don’t take to the more subtle English techniques she uses … an entertaining read. The important themes of the book – slavery and the resistance movement – are, in spite of some moving encounters, unfortunately far less developed than the Quakers and quilting angle. “

The Last Runaway by Tracy Chevalier The Omnivore