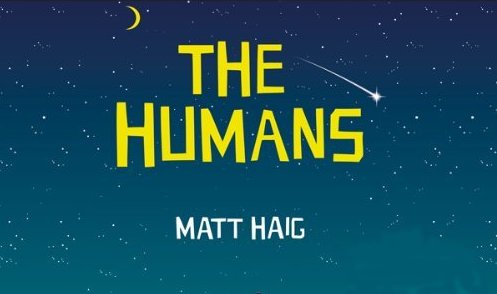 The Humans by Matt Haig

Blurb: It’s hardest to belong when you’re closest to home…One wet Friday evening, Professor Andrew Martin of Cambridge University solves the world’s greatest mathematical riddle. Then he disappears. When he is found walking naked along the motorway, Professor Martin seems different. Besides the lack of clothes, he now finds normal life pointless. His loving wife and teenage son seem repulsive to him. In fact, he hates everyone on the planet. Everyone, that is, except Newton. And he’s a dog. Can a bit of Debussy and Emily Dickinson keep him from murder? Can the species which invented cheap white wine and peanut butter sandwiches be all that bad? And what is the warm feeling he gets when he looks into his wife’s eyes?

“If you guess that he falls in love with the professor’s neglected wife and helps her bullied and alienated teenage son, you will not be disappointed. Nor, however, will you notice the essential predictability of plot, if only because there are so many other things to enjoy along the journey, not least the subtle changes in characterisation as the incredible slowly shades into the credible.”

“The Humans harks back to the so-called “Martian” school of fiction, with its central conceit of showing us to ourselves as if through alien eyes, and also taps into the modish vein opened by Mark Haddon’s The Curious Incident of the Dog in the Night-time about how emotions can be interpreted and valued. It’s a wonderfully funny, gripping and inventive novel. Like Kurt Vonnegut and Audrey Niffenegger, Haig uses the tropes of science fiction to explore and satirise concepts of free will, love, marriage, logic, immortality and mercy with elegance and poignancy.”

“Could be cheesy, but it’s not. It’s funny, clever and quite, quite lovely.”

“Just like humans, the book has its flaws: such as Andrew’s conversations with his loved ones that are filled with awkward exposition, or how the alien incarnation of Andrew is so different to the original that you would expect his family to ask more questions. Just like humans, though, the good easily outweighs the flaws, resulting in a novel with an enormous heart, infused with a sense of gratitude for everything that makes us who we are.”

“The conceit may not be original (it was back in the 70s that Craig Raine’s Martian sent a postcard home, and the aliens rolled around their spaceship laughing at humans’ potato-bashing in the Smash advert), but Haig uses it superbly. As our alien’s emotional attachment grows, so too do his reflections on the odd appeal of our short and brutish lives, and especially on our gift for love. ”

“Haig, who has written eloquently about his own experience of depression, and who mentions his period of suffering panic attacks in an afterword, is sensitive on the way that a supposedly advanced species treats its mentally ill (“sadness seemed to me like a disease, and I worried it was contagious”), and on shortcomings of medicine such as the absolute separation of illness of body and mind. There are sharp gems: “Humans … don’t like mad people unless they are good at painting, and only then once they are dead.” And droll observations on other topics abound.”