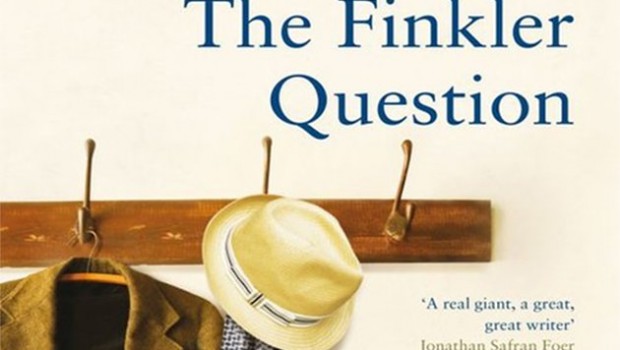 The Finkler Question by Howard Jacobson

Blurb: He should have seen it coming. His life had been one mishap after another. So he should have been prepared for this one…’ – Julian Treslove, a professionally unspectacular former BBC radio producer, and Sam Finkler, a popular Jewish philosopher, writer and television personality, are old school friends. Despite a prickly relationship and very different lives, they’ve never quite lost touch with each other – or with their former teacher, Libor Sevick, a Czech always more concerned with the wider world than with exam results. Now, both Libor and Finkler are recently widowed, and with Treslove, his chequered and unsuccessful record with women rendering him an honorary third widower, they dine at Libor’s grand, central London apartment. It’s a sweetly painful evening of reminiscence in which all three remove themselves to a time before they had loved and lost; a time before they had fathered children, before the devastation of separations, before they had prized anything greatly enough to fear the loss of it. (Bloomsbury)

“Jacobson cunningly crafts sublime pathos from comedy and vice versa. As such, he is the literary equivalent of Tony Hancock, illuminating the conflict, anger, love and dependence created by friendship while wincing at the ignominy and absurdity of the characters’ predicament. Jacobson’s prose is a seamless roll of blissfully melancholic interludes. Almost every page has a quotable, memorable line.”

“So then: all this Jewishness and not Jewishness is what the book asks the reader to weigh – eloquently, farcically, seriously, mockingly, perceptively, dumbly, brilliantly. Now, here’s the rub. (Finkler and Treslove are obsessed by Hamlet by the way.) I am not Jewish. But the reason I enjoyed this novel so, aside from its formal verve, is because it seemed to me that Jacobson is only using Judaism as his “way in”. In other words, as all serious artists do, he is mining his immediate milieu as a way of directly unearthing the deeper questions of family, society, belief, culture, relationships – the underlying nature of humanity.”

“The opening chapters of this novel boast some of the wittiest, most poignant and sharply intelligent comic prose in the English language, as though the writer, like his characters, is caught up in a whirlwind courtship (of each other, of the reader, of the idea of the preciousness of now in the teeth of time’s passing). Jacobson’s brilliance thrives on the risk of riding death to a photo-finish, of writing for broke. Exhilaration all the way.”

“…another masterpiece… The Finkler Question is further proof, if any was needed, of Jacobson’s mastery of humour. But above all it is a testament to his ability to describe — perhaps it would be better to say inhabit — the personal and moral worlds of his disparate characters.”

“There are some great riffs and skits in The Finkler Question … But at the heart of the book is Julian the wannabe Jew, a wonderful comic creation precisely because he is so tragically touching in his haplessness. The most moving (and funniest) scenes are those in which he and Libor, the widower with nothing more to live for, ruminate on love and Jewishness. Sam is more two-dimensional, partly because for so much of the time we see him through Julian’s eyes.”

“Jacobson exquisitely conveys the wilful posturing of these ‘ASHamed Jews’. This and much else – notably the minor motif of the gulf that both Treslove and Finkler experience between themselves and their adult children – has a painful as well as a funny side.”

“For some writers a thorough investigation of the situation of British Jews today might do as the subject for a single book. In The Finkler Question it’s combined with his characteristically unsparing – but not unkindly – ruminations on love, ageing, death and grief. He also manages his customary – but not easy – trick of fusing all of the above with genuine comedy… No wonder that, as with most of Jacobson’s novels, you finish The Finkler Question feeling both faintly exhausted and richly entertained.”

“The Finkler Question is a terrifying and ambitious novel, full of dangerous shallows and dark, deep water. It takes in the mysteries of male friendship, the relentlessness of grief and the lure of emotional parasitism. In its insistent interrogation of Jewishness – from the exploration of the relationship between the perpetrators of violence and hatred and their victims, to the idea of the individual at once in opposition to and in love with his or her culture – it is by turns breezily open and thought-provokingly opaque, and consistently wrong-foots the reader.”

“Jacobson answers none of the questions he raises in The Finkler Question, but the path he follows through its thorny issues involves situations which are both very funny and terribly sad, often simultaneously.”

“…while The Finkler Question is both an entertaining novel and a humane one, it isn’t Howard Jacobson at his best. The characters are not as satisfyingly developed as in 2006’s superb Kalooki Nights and his writing here feels less precise than is his wont, less fresh and less frighteningly mordant.”

“[The Finkler Question], though by no means a negligible work, discomforts the reader with uncertain descriptions, callous sarcasms and failed gags… While the novel’s slips – and typos – may be forgiven as the product of haste, its meticulous cynicism is more troubling.”

“Jacobson writes perceptively about how durable friendships are compounded, in large part, of envy, schadenfreude and betrayal … It is in the treatment of Judaism, however, that The Finkler Question‘s most serious flaw emerges … Treslove’s religious quest becomes an opportunity to recycle a host of clichés about Jewish difference … Jacobson’s approach is dispiriting because he has the capacity to reinterpret Jewish tradition in startling ways.”