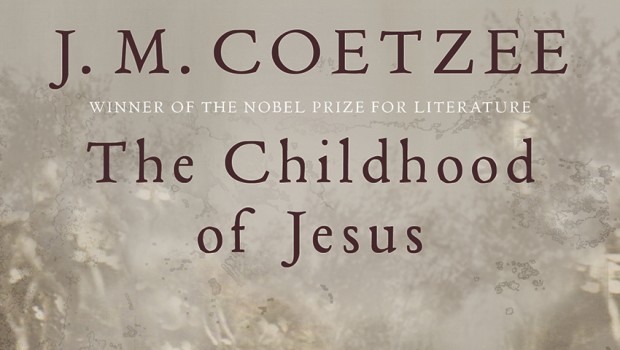 The Childhood of Jesus by JM Coetzee

After crossing oceans, a man and a boy arrive in a new land. Here they are each assigned a name and an age, and held in a camp in the desert while they learn Spanish, the language of their new country. As Simon and David they make their way to the relocation centre in the city of Novilla, where officialdom treats them politely but not necessarily helpfully. Simon finds a job in a grain wharf. The work is unfamiliar and backbreaking, but he soon warms to his stevedore comrades, who during breaks conduct philosophical dialogues on the dignity of labour, and generally take him to their hearts. Now he must set about his task of locating the boy’s mother. Though like everyone else who arrives in this new country he seems to be washed clean of all traces of memory, he is convinced he will know her when he sees her. And indeed, while walking with the boy in the countryside Simon catches sight of a woman he is certain is the mother, and persuades her to assume the role.

“In an interview in 1983 – when he was still prepared to comment on his own fiction – Coetzee said: “Everyone seems to see bleakness and despair in my books. I don’t read them that way. I see myself as writing comic books, books about ordinary people trying to live ordinary, dull, happy lives while the world is falling to pieces around them.” This is worth bearing in mind when reading his new novel, The Childhood of Jesus, which at first glance resembles an odd cousin to Cormac McCarthy’s post-apocalyptic father-and-son odyssey The Road, with bureaucrats, not cannibals, for antagonists.”

“Coetzee is usually cast as a cold, austere and cerebral writer; a South African Beckett, gloomily preoccupied with the operations of power and desire. But The Childhood of Jesus emphasises another side of him: the child of the 1960s. It suggests a late-Tolstoyan drift, mystical and mildly cranky. The question of spiritual discipline has long been present in his writing: self-denial versus sensualism, the path of Jesus versus that of Byron. But in his new book, it takes a surprisingly hippyish, New Agey form … The Childhood of Jesus is a very mysterious novel: I finished it impressed, intrigued and confused, without any clear sense of what it was actually about. Of course the vagueness is part of the point …”

“Don Quixote, the only book [David] ever reads (or “reads”), parachutes a chivalric hero into a picaresque world; but David refuses to accept this: he sees Quixote as the hero of a straightforward chivalric romance (just as Quixote sees himself). His failure to see the irony is perhaps inevitable. The Childhood of Jesus parachutes a religious hero into an absurd, post-Beckettian world, in which God and the truth are merely the storyteller’s playthings. ”

“Double Booker winner Coetzee’s fable has a dreamlike, Kafkaesque quality. Are we in some kind of heaven, or purgatory, or simply another staging post of existence? Clear answers are elusive but this thought-provoking story is a riveting read and surely Coetzee’s best novel since Disgrace more than a decade ago.”

“What it reminds me of most is Peter Handke’s Kaspar – an experimental stage play about the way language restricts the pure freedom of a childish consciousness. But it’s also a little like Werner Herzog’s movie, The Enigma of Kaspar Hauser – a more realist film about an unsocialised man, trying to find his feet in society. Coetzee has always had the enviable ability, in a writer, to make a virtue of his limitations. The prose is very plain; the characters are a little abstract; the questions they ask aren’t quite as interesting as they suppose. Coetzee knows all this, but where it leaves the reader I’m not so sure.”

“To say that this is a story about the power of love to conquer death is to be crude. There are parallels with the biblical account of Christ’s conception and childhood, but the (undeniably catchy) title invites a hunt for clues, which distracts from the novel’s haunting reverberations … the play with Cervantes is more enriching, posing as it does suggestive intimations about the ambiguous nature of “the real” and its relationship to love.”

“One abiding – and abidingly strange – impression left by The Childhood of Jesus is of the anonymous but pressingly real society in which it immerses us: a sort of socialist utopia where the buses are free, where state functionaries allocate housing and workers do life-drawing and philosophy classes, where licensed brothels are available if you can get your head round the paperwork. Needless to say, it has certain labyrinthine or Kafkaesque qualities.”

“Is he a kind of Christ-child, or just an unusually imaginative boy? Coetzee offers no clues, but then he’s never been a writer who gives his readers easy points of orientation. Instead, he uses all-too-familiar pillars upon which to construct a story that’s as disquieting as it is moving – one that conjures up an extraordinary sense of its protagonists being helplessly adrift, sustained by illusions yet riddled with doubts … ever since I finished it, it’s been going round and round inside my head like nothing else I’ve read in ages.”

“At the level of narrative The Childhood of Jesus is laid out with total efficiency in Coetzee’s hushed but resonant present-tense mode. Technical problems, such as not tying yourself in knots when you’ve decided to call your central characters ‘he’ and ‘the boy’, restricting their newly given proper names to dialogue, are made invisible to the reader. The inherent staginess of Jesus-figures is held off too: most of the time David is a completely plausible five-year-old, which is one of the things that sometimes makes Simón seem a little crazy. As a reading experience it’s utterly absorbing, with almost painful levels of meta-suspense as you try to work out where the story is aiming to lead you. Questions are as close as Coetzee comes to direct statements, and the novel is richly generative of these.”

“Now and again, Coetzee seems to be confirming our sense of the novel’s silliness, such as when he uses deadpan precis to put an earlier scene in perspective: “Eugenio seems intent on showing that their disagreement about rats, history, and the organisation of dockside labour has left no hard feelings.” At other points – for example, Simon’s professed desire to find “a new life, a new beginning” – the novel feels earnestly, desperately human. Such conflicting impulses are evident throughout. When one of Simon’s colleagues says that if he wants meat, he should make a rat trap, Simon reflects: “He can see no sign that he is joking. Or if it is a joke, it is a very deep joke.” The Childhood of Jesus is rarely funny and deep at the same time. Nevertheless, “deep joke” is one of the categories to which it could be said to belong.”

“In its defence The Childhood of Jesus is beautifully put together; the marquetry of narrative is as competent as one would expect from such an experienced practitioner. Its intellectual enquiries, such as the dockers’ mediation on the nobility of manual toil over mechanisation, are not without interest either. But overall the reader finds himself in the same position as Simón, who considers the nameless land ‘too placid for his taste, too lacking in ups and downs, in drama and tension’.”

“Wintry humour — reminding you of how much Beckett has meant to Coetzee — sporadically flickers through what mainly seems a prolonged enigma. What is this place populated by figures who have shed all memory of their previous existence? Why is Simon searching for a woman he will mysteriously recognise as David’s mother? An answer to the latter query seems to be that Coetzee is offering a rejigged version of gospel accounts of Jesus’s childhood.”

“Only to look for the religious parallels is simplistic and unrewarding. The tension in the book comes from both Simon and David’s disruption of the order of Novilla, and the order of the novel’s insular universe … These are not the horrors of Waiting for the Barbarians, this is the horror of banality, and it is apt that the denouement of The Childhood of Jesus is a flight from inertia into the chaotic hinterlands behind Novilla. And that is where the reader is abandoned at the end of the book, still trying to determine whether Coetzee has written another great allegorical piece, or something too elusive to provide satisfaction.”

“For those who like their Coetzee heavily seasoned, The Childhood of Jesus might seem rather dilute, faux-naif and sometimes ponderous. But this book will continue to act, silently and unexpectedly, on the reader’s imagination. It unpicks the Christian myth and braids it together with folk tales, the early novel, Pythagorean mysticism, Platonic philosophy, Buddhist epigrams, mathematics – powerful and poetic languages that underwrite our world. Future readers will be able to trace these borrowings more carefully but I emerged content to let this textual weave flicker on the horizon of awareness, all the while remaining a little unsure about a world that exists somewhere between the beguiling and the bland.”

“The second – and better – half of the novel deals mostly with David’s education and the inability of his teachers to come to terms with his “exceptional” nature and talents. The narrative picks up, becoming quite lively at times, and arguments between the educational authorities and Ines and Simon at last offer dramatic scenes, something that Coetzee has always done well when he troubles to do it … the novel is at best evidence of what you can get away with if you are billed as “a very great writer”. It seems to me an unremarkable and undistinguished book, with nothing very interesting to say.”