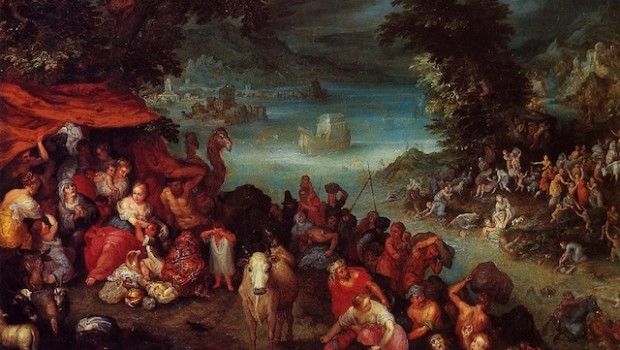 Blurb: In THE ARK BEFORE NOAH, British Museum expert Dr Irving Finkel reveals how decoding the symbols on a 4,000 year old piece of clay enable a radical new interpretation of the Noah’s Ark myth. A world authority on the period, Dr Finkel’s enthralling real-life detective story began with a most remarkable event at the British Museum – the arrival one day in 2008 of a single, modest-sized Babylonian cuneiform tablet – the palm-sized clay rectangles on which our ancestors created the first documents. It had been brought in by a member of the public and this particular tablet proved to be of quite extraordinary importance. Not only does it date from about 1850 BC, but it is a copy of the Babylonian Story of the Flood, a myth from ancient Mesopotamia revealing among other things, instructions for building a large boat to survive a flood. But Dr Finkel’s pioneering work didn’t stop there. Through another series of enthralling discoveries he has been able to decode the story of the Flood in ways which offer unanticipated revelations to readers of THE ARK BEFORE NOAH.

Noah’s Ark: the facts behind the Flood | Irving Finkel | The Telegraph

“Irving Finkel’s beguiling book will only increase your interest in the story – unless, of course, you belong to the Ukip school of biblical interpretation… Finkel is a master at deciphering these ancient cuneiform clay tablets, but this book is far more than a fine piece of detective work: it is a humane work of scholarship that enlarges the soul.”

“This book does more than change the way we imagine the ark, or understand the sources of a Bible story, however. It rescues cuneiform from its dusty place in the museum basement. The ark tablet is roughly as distant from, say, the time of Hadrian’s Wall, as Hadrian is from us. But it feels fresh and exciting here.”

“Aware that he might be overturning a few apple-carts, by finding Noah’s Babylonian ancestor, the charged thrill of Finkel’s chase permeates the book — the pages don’t just join dots, they supply new pieces for a beautiful, Bronze-Age jigsaw-puzzle … Consistently scholarly and droll, Finkel’s writing is also eccentrically vivid: “Reading a tablet satisfactorily is like squeezing a bath sponge; the more determined the grip the greater the yield”. The author’s enthusiasm for his quest is amply demonstrated with boyish italics and capitals for emphasis; it is a joy, at times laugh-out-loud funny.”

“Finkel’s account of how he came by the tablet – featuring as it does an enigmatic collector who once starred as Doughnut in the 1970s children’s show Here Come the Double Deckers – is wryly and entertainingly told. Even so, it does not take him long to broaden out his focus. The tablet, for much of the book, in effect plays the role of a MacGuffin. Finkel’s real passion is less the story of the flood than the script in which it is written … The great achievement of his book is to demonstrate not only how challenging he found it as a young man to master cuneiform, but how richly rewarding the effort of his discipleship has been ever since.”

“So, how did the Ark story end up in Genesis? Finkel convincingly suggests it was absorbed by Jewish chroniclers during their people’s captivity in Babylon under Nebuchadnezzar II in 597.”