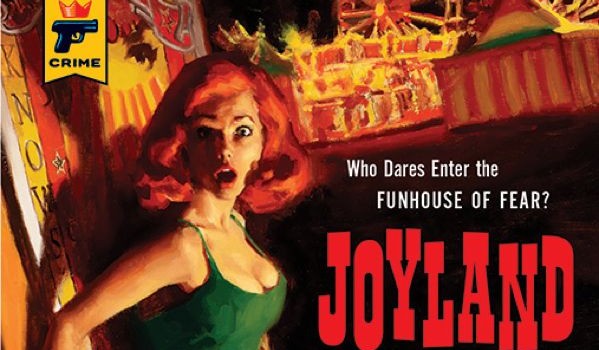 Blurb:  Set in a small-town North Carolina amusement park in 1973, Joyland tells the story of the summer in which college student Devin Jones comes to work as a carny and confronts the legacy of a vicious murder, the fate of a dying child, and the ways both will change his life forever. (Titan Books)

“Do we care more if Devin finds the killer or if he makes a success of “wearing the fur” – dressing up as Howie the Happy Hound and entertaining visiting children? Horror will be provided by King in spades later this year, when he returns to the world of The Shining in sequel Doctor Sleep. Joyland is a far gentler, deeper, more thoughtful book than the one it masquerades as. More a coming-of-age mystery than a horror-filled thriller, it’s closer to the tone of King’s short story “The Body” – on which the film Stand By Me is based – than it is to the author’s real forays into horror, and all the more intriguing for it.”

“[The] double vision — the 21-year-old actively living through his experience while his older incarnation reflects on it — gives the book an unexpected perspective, even as it reassures us that whatever happens in the novel, Devin will come out alive. That’s a neat trick to pull off in a thriller, and “Joyland” is definitely a thriller, albeit in a minor key. Published by the excellent Hard Case Crime — an imprint devoted to hard-boiled fiction, both reprint and new — it’s also an homage, in some sense, to the disposable culture of the early 1970s: pulp novels, LPs and independent amusement parks, such as the one where much of the action here takes place.”

“No one picking up a book with a screaming dame on the cover and the tag-line “Who Dares Enter the Funhouse of Fear?” can complain that they were expecting Ulysses, or even one of King’s own deeper and more architectural works: set in a dilapidated amusement park, Joyland is a reliable if slightly clunky ride from a writer who has rarely forgotten how to tell a good story.”

“As in so much of King’s work, quotidian details pervade the narrative, providing a solid foundation for the dramatic, sometimes otherworldly events. King pays close attention to everything, from the emotional weather of his protagonist to the1,001 details in the day-to-day life of a working carny. Devin’s emotions are, for the most part, turbulent. Early on, he is unceremoniously dumped by his long-time college girlfriend. King treats this crisis with profound and unforced empathy. His ability to convey the raw, instantly recognizable emotions of a vulnerable young man is one of the novel’s unobtrusive strengths.”

“Slight but ably crafted, Joyland is a sentimental coming-of-age story thinly disguised as a shocker, exuding nostalgia for the 1970s (an era King depicted flintily at the time, in Carrie) and a longing to be a teenage innocent again. ”

Its twists and shocks are still what elevates it, though. Nothing about its final pages is predictable but nothing about it quite gives you the sense that King is discovering anything new about himself as a writer.”

“To get to a book lover’s Joyland, just leave your guilt at the door, seek gratification over edification, and don’t take offense easily.”