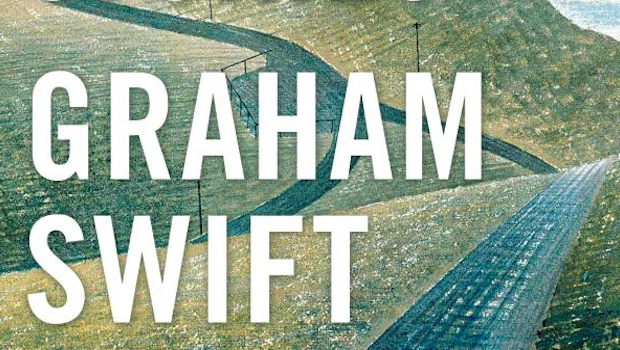 England and Other Stories by Graham Swift

Blurb: These twenty-five new stories mark Graham Swift’s return to the short form after seven acclaimed novels and confirm him as a master storyteller. They unite into a richly peopled vision of a country that is both a crucible of history and a maze of contemporary confusions. Meet Dr Shah who has never been to India and Mrs Kaminski, on her way to Poland via A meet Holly and Polly who have come to their own Anglo-Irish understanding and Lily Hobbs, married to a shirt; Charlie and Don who have seen the docks turn into Docklands; Mr Wilkinson the weirdo next door; Daisy Baker who is terrified of Yorkshire; and Johnny Dewhurst, stranded on Exmoor. Graham Swift steers us effortlessly from the Civil War to the present day, from world-shaking events to the secret dramas lived out in rooms, workplaces, homes. (Simon & Schuster, July 2014)

“Graham Swift is a master of the short story, and this collection is full of gems. This is not to say that it will delight everyone. If your idea of a good short story is an anecdote with, perhaps, a twist in the tail, the kind of story that Maugham and Maupassant wrote so well, then Swift is not the writer for you. His stories are more like Chekhov’s or William Trevor’s. They are snatches of seen and felt life. The narrative is usually veiled, the movement internal.”

“Invariably he endows these blank ciphers with aspects of the extraordinary — percipience, insight or understanding — or exposes them to feelings and events which place them in extraordinary positions and offer them opportunities to behave remarkably while remaining apparently run of the mill. Swift revels in the trappings of Pooterishness while denying his protagonists Mr Pooter’s silliness. His vision may be contrived but it never patronises. The experience of these stories rescues Swift’s ‘ordinary’ men and women from stereotype, a moral in itself.”

“Swift is fond of wordplay – “testament” reminds one character in another story of “testicle” – but he keeps any connection between “fusilli” and “fusilier” unobtrusive; it adds little but doesn’t detract anything either. Other stories occasionally force patterns and analogies: a British-born doctor cut off from his Indian roots comparing his father’s amputated leg to how India looks on a map. Elsewhere a widowed osteopath who finds love with a young client fears she’ll break off the affair “like the click of a bone in her back”.”

“The result is a mosaic portraying England as a nation with a permanent identity crisis, caught between modernity and the past, tragedy and comedy. Its citizens are similarly sandwiched: between longing and disappointment, adventure and stasis, intensity and retreat. Not everything works. Some of Swift’s sexual politics seemed fanciful at best: the May-October romance of “Half a Loaf”, or the lesbian embryologists “Holly and Polly”. But this is a collection, at once elegant, humble and humane, that makes you sad that publishers run shy of short stories, and that the Man Booker overlooks the form.”

“This is a sharp, beautiful collection: every story quick and readable but leaving in the memory a core, a residue, of thoughtfulness. Some are wicked, some are funny; others, such as “Was She the Only One” or “Fusilli”, encapsulate a huge but numbly personal crisis; some manage all three at once. Some feel old-fashioned, but as if more than one layer of time is involved – as if you’re reading a 1950s story mimicked in a pastiche of a TV drama from the 1970s. There are a few duds, but Swift’s practice – which is to make a world in a dozen pages, sometimes less; a world in a bottle – carries the reader quickly through and on to the next.”

“Perhaps these days Swift has a lower profile than some of his contemporaries in that brilliantly talented 1980s generation of English novelists — McEwan, Barnes, Boyd, say — but at his best he is more than their equal. There is much here that belongs up with his best work: the First World War wife who doesn’t wash her husband’s shirt because its scent carries her memory of him; or the young man at his old headmaster’s funeral who finds awkward memories reawakened by a classmate’s mother.”

“Swift is particularly interested in the language of the mundane. Is it really a “tragedy” when a fork-lift truck driver dies of a heart attack? What does it mean to look “decent” (rather than ” a right little whore,”) or to have “a weirdo” living next door? The word “weirdo” is at the heart of one of the collection’s best stories, Ajax, in which a man prone to exercising in his back garden, dressed only in his underpants, wonders how one of the major Greek heroes should have given his name to a household cleaning product.”

“These 25 stories are set from the 1600s to the present day, taking in the civil war, the first world war and Afghanistan along the way, but above all the huge social changes of England’s past century. Most of them brief, the longest only 10 pages, the stories are peopled by East End boys who become entrepreneurs; Britons of Indian, Greek and Caribbean heritage; those who have made it from the slums to the suburbs, all of whom face life’s many challenges. A concise writer, Swift often achieves more in a line than many strive for in a page.”

“Here, in a tightly paced sequence of tales, he ranges across economic circumstance and change and issues of race and class, as well as the matter of love and loss, to consider what makes us who we are. Some of the stories are slighter than others. Near the beginning of the book, they are too often burdened by an occasionally laboured didacticism.”

“The title suggests something state-of-the-nation about the collection, which is not too bold a claim when one considers Swift’s reputation as a chronicler of English life. His England is one pulsating with its past – the story entitled Haematology takes us as far back as the civil war – but by and large he’s grounded in the contemporary, his protagonists the everymen and women who make up this country”

“As always with Swift, there is a risk that, in his zealous attempts to demonstrate interest in humdrum people, he comes close to patronising his characters. When someone refers to posh Londoners driving their massive four-by-fours in the city streets, an Exmoor coastguard “didn’t quite get the joke, never having been to Chelsea”. For this story to work it is necessary that this character be a not very well-travelled innocent but would he really be so slow on the uptake?”

England and Other Stories by Graham Swift The Omnivore