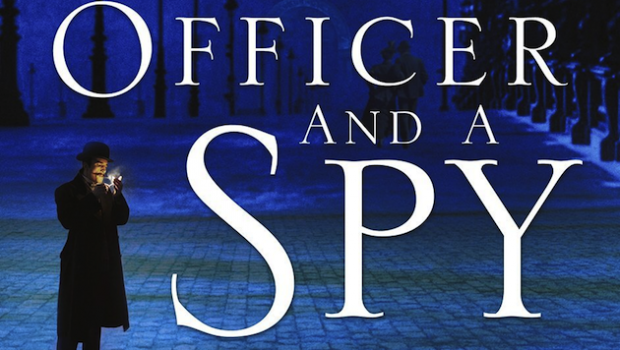 An Officer and a Spy by Robert Harris

Blurb: January 1895. On a freezing morning in the heart of Paris, an army officer, Georges Picquart, witnesses a convicted spy, Captain Alfred Dreyfus, being publicly humiliated in front of twenty thousand spectators baying ‘Death to the Jew!’ The officer is rewarded with promotion: Picquart is made the French army’s youngest colonel and put in command of ‘the Statistical Section’ – the shadowy intelligence unit that tracked down Dreyfus. The spy, meanwhile, is given a punishment of medieval cruelty: Dreyfus is shipped off to a lifetime of solitary confinement on Devil’s Island – unable to speak to anyone, not even his guards, his case seems closed forever. But gradually Picquart comes to believe there is something rotten at the heart of the Statistical Section. When he discovers another German spy operating on French soil, his superiors are oddly reluctant to pursue it. Despite official warnings, Picquart persists, and soon the officer and the spy are in the same predicament. (Hutchinson, 2013)

“Harris is excellent on particular features of fin-de-siècle life. Picquart is a lover of the arts, allowing Harris to interweave apt allusions to Monet, Debussy, Renoir and Zola (whose famous ­pro-Dreyfus pamphlet J’Accuse figures in the story). Equally telling are the humdrum details of ­contemporary espionage. Double-gummed envelopes, spyholes in shutters, speaking-tubes smuggled into chimney stacks — Harris has clearly enjoyed himself researching the horse-drawn equivalents of satellites and digital encryption.”

“Harris is committed to the belief that “you can get at a truth as a novelist in a way you can’t as an historian — you can bring things alive, the sense of fear, prickly fear, the sweat, the smell of the place and so on” — and he does give us the look, sensations, sounds and smells as no historian could. What even this anchoring in the present can’t achieve is the creation of much suspense, the outcomes all being known. But if An Officer and a Spy is not stay-up-all-night exciting, it is informative, accomplished and highly enjoyable nonetheless.”

“The chief liberty he has taken is to imagine that Picquart wrote a secret account of the affair; that first-person account is the text of this novel. This invention aside, he hews closely to the facts: it’s a mark of how extraordinary much of this story is that so little fabrication, as such, is required.”

Tom Standage, The Independent on Sunday

“Harris was inspired to tackle the Dreyfus story by his film director friend Roman Polanski, and at times the novel does read like a film script, with spies chasing spies across fin de siècle Paris and dramatic set pieces in military and civil courts. For the most part it is a gripping read, except for the period where Picquart is exiled from Paris, which tends to sag.”

“In An Officer and a Spy, Harris gives us a portrait of one institution: the French army. There are skilfully composed characters, from successive ministers of war and the chief of the intelligence department to Major Henry, the second in command of the shadowy statistical section.”

“Against the odds, the result is both gripping thriller and Buchan-esque adventure: its revelations impeccably paced and its original material used to poignant effect (in particular, Dreyfus’s own writings, evoking the prisoner as the ineradicable ghostly conscience of a degraded civilisation). An Officer and a Spy is carried throughout by the peerless characterisation of Picquart. Complex and demanding, he is stiff, awkward, scornful and yet deeply sympathetic, a patriot whose life has been deformed by his loyalty and an inveterate free-thinker.”

“Thrillers,’ Picquart informs us, ‘may sometimes contain more truths than all Monsieur Zola’s social realism put together.’ An Officer and a Spy is more than a thriller but inevitably such a taut narrative fails to convey why the turmoil caused by the Dreyfus Affair brought France to the brink of civil war. But what we lose in in-depth understanding, we gain in excitement, as the spy becomes spied upon, the investigator becomes the suspect, and the full force of the state’s sinister apparatus of espionage and dirty tricks is directed against its own chief.”

“Dreyfus’ character remains faintly disagreeable. Convinced of his innocence Picquart is shocked by his plight, shackled by leg irons on his Devil’s Island bed. It is his sorely tried righteousness that counts. None of the characters is entirely fictional, promises the author’s note. Therein lies the only difficulty with this taut thriller, as the reader wonders how much is history and how much is Harris.”

“Amid the rush of facts there is little room for characterisation. The need for a list of dramatis personae tells its own story; military types come and go, distinguished only by slight variations in facial hair, eyewear and girth. Attempts to add historical significance contribute to the sense of documentary dutifulness.  Structurally, the novel has issues, too. Not least among them is its attempt to combine elements of espionage thriller and courtroom drama.”

An Officer and a Spy by Robert Harris The Omnivore