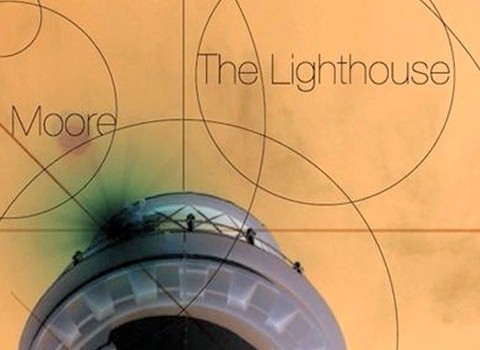 Blurb: The Lighthouse begins on a North Sea ferry, on whose blustery outer deck stands Futh, a middle-aged, recently separated man heading to Germany for a restorative walking holiday. Spending his first night in Hellhaus at a small, family-run hotel, he finds the landlady hospitable but is troubled by an encounter with an inexplicably hostile barman. In the morning, Futh puts the episode behind him and sets out on his week-long circular walk along the Rhine. As he travels, he contemplates his childhood; a complicated friendship with the son of a lonely neighbour; his parents’ broken marriage and his own. But the story he keeps coming back to, the person and the event affecting all others, is his mother and her abandonment of him as a boy, which left him with a void to fill, a substitute to find. (Salt)

“It is this accumulation of the quotidian, in prose as tight as Magnus Mills’s, which lends Moore’s book its standout nature, and brings the novel to its ambiguous, thrilling end.”

“There’s a contrast here with another worthwhile title on the Booker longlist, Will Self’s Umbrella, which, line by line, is harder to read, yet in the end spells out its purpose in case you misunderstood. The Lighthouse looks simple but isn’t, refusing to unscramble what seems a bleak moral about the hazards of reproduction, in the widest sense. Small wonder that it stood up to the crash-testing of a prize jury’s reading and rereading. One of the year’s 12 best novels? I can believe it.”

“Occasionally, the scaffolding that supports The Lighthouse‘s construction is rather shaky. There’s a piece of backstory about Ester and Bernard’s history that, in its treatment of brothers and infidelity, echoes and emphasises the delicately handled sexual competition between Futh and Kenny a touch too neatly … The artifice shows, but only for a moment before we’re immersed in a chilly, heart-wrenching story that seems to say that, for all our obsessions with old wounds and childhood hurts, the thing that damages us most of all is the thing of which we are unaware.”

“From a technical point-of-view, the peculiar achievement of The Lighthouse lies in the nervelessly skilful fusion of its emotions and its actions: the “literary” dimension of Futh’s nostalgia and obsession, and the “genre” machine that, notch by notch, cranks up foreboding and suspense. Because of who he is, because of how he feels, the monster stalks him. The finale delivers a neat (perhaps overly neat) QED. ”

“Though sparely told, the novel’s simple-seeming narrative has the density of a far longer work. People and places are intricately evoked with a forensic feel for mood. Its title becomes a recurring motif, from the Morse code torch flashes of Futh’s boyhood to the lighthouse-shaped silver perfume case that he carries in his pocket, history filling the void left by its missing vial of scent.”

“His journey along the Rhine is full of odd encounters, and brings a gradual and suspenseful unfolding of the truth.”

“What makes The Lighthouse stand out is a plain narrative overlaid with extraordinary descriptions of smell, giving the story an additional layer of feeling, an almost fetid intensity. “Ester peels her orange on to the bar and a sweet, citrussy mist surrounds her, masking a warm meat smell.” Not since Patrick Suskind’s Perfume have I read a book that magicked the verbal into such an over-ripe, on-the-turn confection of queasy brilliance.”

“If there is a quibble with all this, it is with the narrative’s seemingly forced symmetry. Symbolic objects, from Venus flytraps to model lighthouses, crop up constantly and, instead of further illuminating the interchangeability of Moore’s characters and plot lines, lend a clumsy, artificial edge to this otherwise assured novel. ”