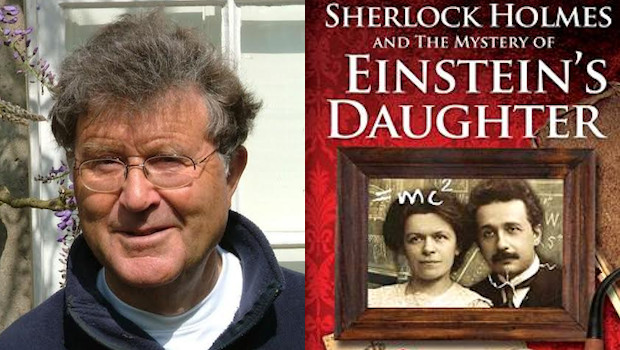 For decades, scholars have puzzled over what happened to Albert Einstein’s illegitimate daughter, Lieserl. When author Tim Symonds came across the mystery, he knew only one man was capable of solving it. The result: Sherlock Holmes and the Mystery of Einstein’s Daughter, a historical detective novel that might be described as upmarket fan-fiction.

Tell us a bit about yourself:
I was born near Regent’s Park, London, but as an eight-year-old my mother took me to Guernsey where I attended a boarding school called Elizabeth College. At 16 I left for a life of real adventure in East and Central Africa — and then somehow found my way to faraway California and obtained a BA from UCLA. All my life the sheer fun of travelling to new places, and the amount one learns in doing so, has been my most significant characteristic. Like a shot I would have sailed with Francis Drake. I just saw an account of his visit to ‘Darien’. It starts:

‘After Balboa’s discovery of the Pacific Ocean, seventy years went by. Then, one day, another bold adventurer stood upon a peak in Darien. The name of this man was Francis Drake. He was known far and wide as the most daring sailor on the seas. He was an Englishman, and he hated Spain and the Spaniards with a bitter hatred. Like Balboa, he visited Darien in search of gold; but he meant to get it from those whom he called his enemies—to take it away from them by force.’

Who are your favourite authors?
I’m gripped by the great Victorian and Edwardian women travellers — especially Edith Durham, Gertrude Bell and Isabella Bird (definitely read Isabella Bird’s A Lady’s Life in the Rocky Mountains). Reading about their adventures is just the job for my novels — for example Edith Durham was something of a spy in Albania during the Ottoman Sultan’s rule and I was able to use her descriptions of people and place in both Sherlock Holmes And The Case of the Bulgarian Codex and Sherlock Holmes And The Mystery of Einstein’s Daughter.

What book are you reading now?
I’m starting the research for my fourth ‘Sherlock’. One day in June 1906 a dog-cart arrives at Sherlock Holmes’s farmhouse. It’s the foreign secretary Sir Edward Grey in ‘mufti’. The Sword of Osman has been stolen from the Topkapi in ‘Stamboul’. Does this mean a plot is brewing against the Sultan Abdülhamid 11? Soon Holmes and Watson are on their way to the Golden Horn and Sea of Marmora… It’s one of the greatest things about writing historical novels – the sheer amount of research needed, and the access people with immense knowledge of the subject so often afford me.

Your novel, Sherlock Holmes and the Mystery of Einstein’s Daughter, is a fictional attempt to get to the bottom of a real-life mystery. When did you first become aware of the story of Lieserl, and what made you doubt existing explanations?
Three years ago, by chance, at a second-hand bookshop near my home in East Sussex I came across a book by an American, Michele Zackheim, titled Einstein’s Daughter, the Search For Lieserl. It’s an amazing true story. Einstein sired an illegitimate daughter with a Serbian woman called Mileva Marić, a fellow physics student at the Zurich Polytechnikum, who later became his first wife. When the child got to the age of about 21 months she disappeared completely and was never heard of again until 83 years later some musty old correspondence turns up in an attic in Berkeley, California, letters between Einstein and Mileva between 1901 and 1903 which mention a daughter. After the letter dated September 1903, utter silence. Researchers have given three explanations for her disappearance, for example she died of scarlet fever, she was put out for adoption, etc. The more I read, the more I looked into it, the more I felt none of the three had got it right. In Einstein’s Daughter Sherlock Holmes comes up with a much more sinister explanation which I believe fits the facts far better, namely the Fourth Theory.

How did you go about researching your book?
Once the theme seems to be settling in my mind I keep an eye open for books on the subject. Sometimes a book just seems to turn up, for instance at a second-hand bookstall at a summer village fete. Above all, it’s the wonder of Wikipedia. In the old pre-Wiki days, living in a small village, it could take a fortnight to order a book at the local library. Now the world’s knowledge comes straight to me through the computer screen. No wonder I send them regular small donations, like Romans throwing coins into a well for good luck.

This is the third novel you have written with Sherlock Holmes as a protagonist. Why did you decide to use an established literary character rather than inventing your own detective?
Good question. I would really like to come up with a new type of detective, preferably female, one which in time would become as iconic as Sherlock Holmes. I go for lengthy walks in the woods and fields near my home in the Sussex High Weald and try to summon her up. Not there yet. Meantime, I have in mind two more Sherlocks — the Sword of Osman adventure and also, in the distance, one concerning St. Petersburg in the time of the Romanovs. The latter might take place in deepest winter. For some reason my three Sherlock novels all begin as a beautiful English spring settles in.

What response have you had to your book, and your theory about Einstein’s daughter?
The novel is on Amazon as from now so we’ll see! I was really pleased recently to get an email from the Einstein Archives in Jerusalem saying the writer did not find it impossible to believe Holmes’s conclusion on Lieserl’s fate was correct.

What made you choose your publisher, MX Publishing?
I think I’m right in saying MX Publishing — while still small by traditional standards — is the largest publisher of Sherlock Holmes novels in the world. The publisher Steve Emecz is incredibly inventive, for example inaugurating the annual international Sherlock Holmes Week from a London locale each summer, and organising events at such famous watering-holes as the Sherlock Holmes Pub near Charing Cross, and the Sherlock Holmes Hotel not far from the famed address 221B, Baker Street. MX authors are quite a brother- and sisterhood (in the latter instance the wittily self-styled Baker Street Babes).

Imagine your ideal reader: which authors do they enjoy?
I think probably they’re into historical novels with an adventurous tinge. I’m very keen to discover what my audience ‘profile’ is — age, interests, life experience and so on. Sitting here where I am now, looking out at a group of crows on the nearby trees, it’s very difficult for me to work that one out. Whoever they are, I love them dearly.

Find out more about the ‘Fourth Theory’ on Tim’s website

Buy Sherlock Holmes and the Mystery of Einstein’s Daughter (paperback)