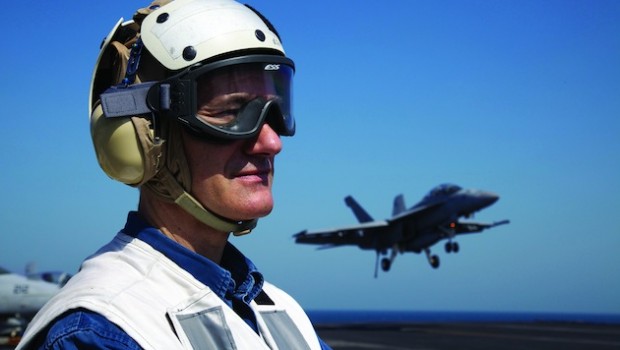 Another Great Day at Sea: Life Aboard the USS George H. W. Bush by Geoff Dyer

Blurb: ’We were on one of the most technologically advanced places on earth but the guys in grease-smeared brown sweatshirts and float coats, draped with heavy brown chains, looked like they were ready to face the burning oil poured on them from the walls of an impregnable castle.’ Geoff Dyer’s incisive and witty voice depicts life on board the USS ship. His inventive descriptions are accompanied by photography by Chris Steele-Perkins, an award winning Magnum photographer. Meeting the Captain, the F-18 pilots and the dentists, experiencing everything from a man-overboard alert to the Steel Beach Party, Dyer guides us through the most AIE (acronym intensive environment) imaginable. Underlying Dyer’s efforts to overcome the disadvantages of being the oldest, tallest (actually, second tallest), and most self-conscious person on the boat is an intense fascination with the military world. In recording daily life on board the ship, Dyer illuminates a society where discipline and conformity, dedication and optimism, become a form of self-expression. Another Great Day at Sea is a dazzling social experiment, bringing readers behind the scenes of the world’s largest aircraft carrier in a way that has never been seen before.

“A total delight… Dyer has always been a thoroughly democratic writer, and he expresses admiration for as many lower ranked crew members as higher ones. His account of the speech given by a lieutenant who had won a bravery award being promoted is extremely moving, as is his story about the ambitions of the Captain’s cook, who aspires to working in the White House.”

“…for all his solipsism, and for all his self-proclaimed incompetence as a reporter, Geoff Dyer succeeds in rendering a very vivid impression of what life is like on an aircraft carrier… And, quite unexpectedly from such a very teasing, very English writer, the book quickly transforms into a love-letter to the can-do optimism of America.”

“His book is a sustained exercise in observation of which the lieutenant commander might be proud. One advantage of Dyer’s attention to the minutiae of this strange world is the continual surprise of his descriptive powers; he approaches on-board rituals with an art critic’s eye that sometimes renders Steele-Perkins’s powerfully constructed photographs redundant. Another is the fact that he can, in this way, stretch time to make it seem endless: about halfway through the book I assumed he had been at sea for months on end; it came as a shock to discover he was, in fact, in the middle of a two-week break.”

“For their part, some readers may see his prose as no more than a fancy delivery system for the real payload of the book, terrific colour plates of life with the US Navy by Magnum photographer Chris Steele-Perkins, who is referred to throughout by Dyer as “the snapper”. At all events, Another Great Day at Sea is a perfect beach read, wherever your boots happen to be on the ground this summer.”

“Dyer fans will warm to his comic digressions on moustaches, deliriously sentimental reveries about what it might have been like to be a Battle of Britain pilot, semi-embarrassing stories about jokingly asking the carrier’s gym boss where he might score steroids, and meditations on the similarities between writing and piloting a plane. Readers of the book’s UK edition are lucky: it’s more handsome (and expensive) than the US edition – featuring more photographs from Chris Steele-Perkins (dubbed “the snapper”) distributed throughout the volume rather than compacted into an insert.”

Another Great Day at Sea: Life Aboard the USS George H. W. Bush by Geoff Dyer The Omnivore