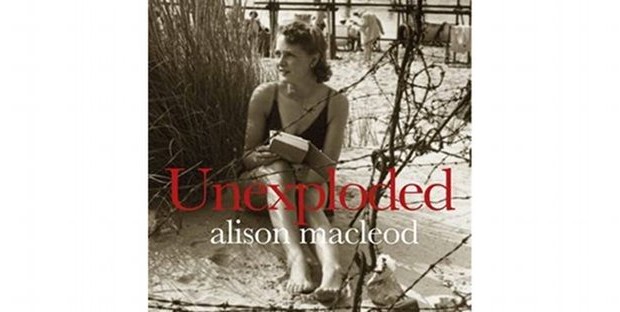 Blurb: May, 1940. On Park Crescent, Geoffrey and Evelyn Beaumont and their eight-year-old son, Philip, anxiously await news of the expected enemy landing on the beaches of Brighton. It is a year of tension and change. Geoffrey becomes Superintendent of the enemy alien camp at the far reaches of town, while Philip is gripped by the rumour that Hitler will make Brighton’s Royal Pavilion his English HQ. As the rumours continue to fly and the days tick on, Evelyn struggles to fall in with the war effort. Then she meets Otto Gottlieb, a ‘degenerate’ German-Jewish painter and prisoner in her husband’s internment camp. As Europe crumbles, Evelyn’s and Otto’s mutual distrust slowly begins to change into something else, which will shatter the structures on which her life, her family and her community rest.Love collides with fear, the power of art with the forces of war, and the lives of Evelyn, Otto and Geoffrey are changed irrevocably. (Hamish Hamilton)

“MacLeod is stunningly good on the slow creep of mounting tension against the backdrop of the oppressive summer heat: “The weather needed to break. The war needed to break. The entire town seemed to live on short, staggering breaths.” Not to mention knowing what’s more powerfully left to the imagination, whether the day-to-day details of a floundering marriage, or Nazi cruelties indescribable. Unexploded is like a piece of finely wrought ironwork, uncommonly delicate but at the same time astonishingly strong and tensile; it’s a novel of staggering elegance and beauty.”

“Like her modernist forebears, Macleod knows that life and death, the terrible and the mundane always co-exist – her genius lies in illustrating these truths while simultaneously spinning a bona fide page turner.”

“MacLeod creates a disconsolate picture of a holiday town that no longer recognises itself. Before the war, ”Brighton’s emotional compass had been the ring-a-ding and the music, the electric lights and ticket-stub happiness”; now the piers are coming down section by section – there is barbed wire on the beach and “a ghostly flotilla of little boats, some pocked by gunfire, listing oddly around the old carousel”. Even the racecourse has been transformed into an internment camp for foreign refugees, among them Otto Gottlieb, a German-Jewish artist whose work featured in the Nazi exhibition of “degenerate art”.”

“This is a reassuringly uncomplicated literary novel, and is deservedly longlisted for the Booker prize. It has a natural ease and absence of artifice. It’s meticulously researched without showing off about it. It’s full of character studies and psychological insights but doesn’t shove them down your throat. It’s poetic without being pretentious – even though there’s a whole Virginia Woolf thread running through it.”

“As MacLeod puts her foot down on the narrative accelerator some episodes do try to pass by in a blur. The heart is still there but the challenge to the intellect is greater. Scenes and themes seem almost to map on to each other but not perfectly, or they are reversed … Unexploded is always readable and entertaining. It does not drag, and it is not hunched under the burden of its cleverness. Like the Tardis it is bigger on the inside. It is one of those books that welcome careful readers.”

“Where Unexploded has the greatest impact is in McLeod’s prose, written with a haunting beauty that brings nebulous emotions into raw focus. In exploring the possibility of suicide in the event of invasion, Geoffrey “navigated past the hard edges of the unspeakable”. Otto has suffered so much that he tries to shut down his emotions so that “small acts of kindness were cruel as razor wire”.”

“Unexploded is clearly well-researched, with historical details sprinkled through the pages. It is also a rather timeless exploration of human behaviour though, whether it is the casual cruelty of children or the equally casual prejudice of adults. Anti-semitism is rife. But it is on the breakdown of Geoffrey and Evelyn’s marriage that MacLeod writes best: the way love can give way to contempt and the way one betrayal can start to poison everything. If the novel occasionally feels over-doused in adjectives (on the first page alone, tables are “sunlit”, shade is “meagre” and a flotilla of little boats is “ghostly”) she compensates with some beautiful descriptive passages.”

“MacLeod is potent on the devastation of war. Her second-person narrated description of a bomb explosion is viscerally powerful, hypnotising with the intimacy of the “you” form while shocking with bald facts. Her depiction of medical experiments on children in the German concentration camps horrifies with a single sentence … There are some flaws. Although MacLeod’s formal style admirably fits in with the argot of the time, she is overly fond of adverbs, and of strings of adjectives.”

“… [A] tendency to flog the life out of her central themes – water and fire, drowning and exploding – is a puzzling weakness in MacLeod’s writing … Whether Unexploded makes the Booker shortlist next month or not, and despite its weaknesses, it will do her reputation no harm. The plot is fast-paced and engaging, the characters are compelling, and the descriptions of wartime Brighton are pin-sharp, with only very occasional signs of that perennial risk of historical fiction: the kerthunk of “research”.”

“There is much to admire and enjoy in this novel, and yet it is less than satisfying. Evelyn is well enough done, a credible portrait of a well-to-do middle-class 1930s wife required to adapt to the utterly different and disturbing conditions of wartime. Little about Geoffrey, however, rings true. In one sense this is obviously intended; he is a hollow man. Otto’s German background is more convincing and the edgy uncertainty of his relations with Evelyn is moving.”

“Otto’s happiness is fleeting – and arguably fatal – but the novel doesn’t seem to mind all that much. I found that a big problem in a book I otherwise enjoyed. There’s plenty going for Unexploded – a persuasive period setting, an intricate plot, some sumptuous prose – and you can see why this year’s Man Booker judges longlisted it, but there’s also something unpalatable about how it puts an exotic stranger on the rack just so the heroine can feel more alive.”

“With attention these characters and their relationships might have transcended type. At her finest, Woolf can describe mediocre feelings; MacLeod mostly adds together hysterical ones.”

Unexploded by Alison Macleod The Omnivore