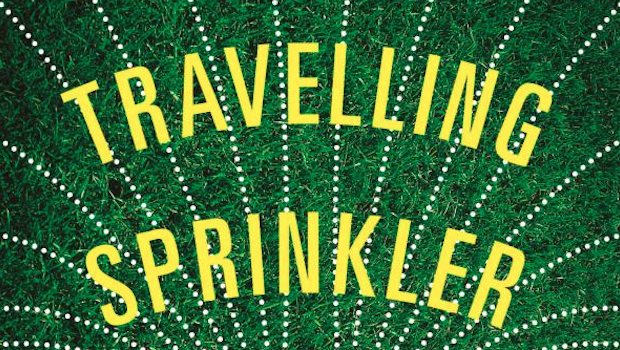 Blurb: Paul Chowder is a poet, but he’s fallen out of love with writing poems. He hasn’t fallen out of love with his ex-girlfriend Roz, though. In fact he misses her desperately. As he struggles to come to terms with Roz’s new relationship with a doctor, Paul turns to his acoustic guitar for comfort and inspiration, and fills his days writing protest songs, going to Quaker meetings, struggling through Planet Fitness workouts, wondering if he could become a techno DJ, and experimenting with becoming a cigar smoker. (Serpent’s Tail, June 2014)

“The whack-off side of Baker’s writing doesn’t pop up often here, except in the epiglottis being “a little vagina in the throat” and an odd bedroom scene involving a surgical scar. As is the case with Baker’s novels in the wacko mood, Travelling Sprinkler is sometimes infuriatingly whimsical, but more often beautiful, charming and touching. Including deviations on subjects ranging from Downton Abbey to the history of garden hoses (which give the book its title), the book is a love story, a music lesson and a political commentary.”

“Chowder is a homely American version of Nabokov’s insanely erudite Russian poets, chatty and intellec­tually omnivorous (“I have so much in my head that’s screaming to get out”). The comedy is gentle: Baker is a comic writer in the widest sense, an optimist who wants to believe in happy endings. However, the world Chowder inhabits is not so gentle. A despairing note runs through the novel, the fear that the US is going to ruin and nothing can be done about it.”

“The book is a delight: funny, tender and endearingly bonkers. A lesser writer dealing with a hapless, guitar-plucking, cigar-puffing poet on the slide in his fifties would be tempted to shovel trouble at him for comic or emotional effect. Baker does the opposite, imbuing Chowder not only with a feverish intellectual curiosity but with a generosity of spirit. The novel has remarkably little in the way of plot, but every page contains wonderful writing, and ridiculous but intriguing digressions.”

“From Chowder’s fumbling experiments with tobacco to his dorm-room-level political rants to the way his first plucked note on a guitar string stirs his “pituitary gland” and to his dawning awareness of love’s complex comforts, as he finally retightens his long orbit around Roz — Traveling Sprinkler can be read as a curious coming-of-age novel. And a funny, abundantly textured, warmhearted one, at that.”

“It’s a novel short on action, sure, but then nobody ever read a Nicholson Baker expecting shoot-outs or a serial killer on the loose. It’s nearly a quarter of a century since he burst onto the scene with his first novel of maverick genius, The Mezzanine — and in this, his 10th book, he once again shows he’s a master of gentle, obsessively detailed comedy. Terrific.”

“Everyone who has ever had to evaluate anything will appreciate the opening of Nicholson Baker’s new novel, Traveling Sprinkler, in which the narrator dreams he has to review a cookbook, so he and his girlfriend make the octopus-walnut muffins, and he says they don’t taste so good, and she says, “Maybe you could praise the walnuts?” … Baker has written some wonderful novels — The Mezzanine, Vox, The Fermata — but Traveling Sprinkler is a bit of an octopus-walnut cupcake. “This is fun!” you think as you bite in, and then you realize that the ingredients don’t really come together.”

“Mr. Baker sinks similes as if they were high, arcing three-point shots. Reading his novels makes your world weirdly vivid, geeked out; you feel that you’re wearing X-ray specs tucked behind a pair of Google glasses. Yet Traveling Sprinkler, for all its felicities, is B-grade Baker. Graded on the curve of all his stuff, it would actually score something worse than a B. It’s his most aimless and least realised novel … You will apparently be able to listen to Paul’s music in an “enhanced” e-book of Traveling Sprinkler that includes the songs. (Mr. Baker apparently worked pretty hard on them). These are mostly not good in a mortifying way, in a room-clearing way, as were the earnest, sub-Bruce Cockburn political songs Mr. Baker released under his own name not long ago. I don’t have the heart to describe Paul or Mr. Baker’s music any more fully. I like both of these guys too much.“