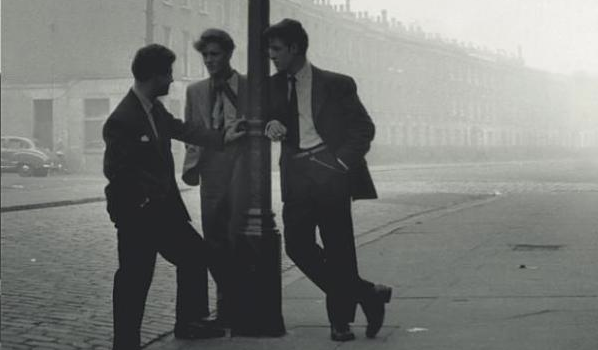 Blurb: Three Brothers follows the fortunes of Harry, Daniel and Sam Hanway, born on a post-war council estate in Camden Town. Marked out from the start by curious coincidence, each boy is forced to make his own way in the world – a world of dodgy deals and big business, of criminal gangs and crooked landlords, of newspaper magnates, back-biters and petty thieves. London is the backdrop and the connecting fabric of these three lives, reinforcing Ackroyd’s grand theme that place and history create, surround and engulf us. From bustling, cut-throat Fleet Street to hallowed London publishing houses, from the wealth and corruption of Chelsea to the smoky shadows of Limehouse and Hackney, this is an exploration of the city, peering down its streets, riding on its underground, and drinking in its pubs and clubs. Everything is possible – not only in the new freedom of the 1960s but also in London’s timeless past. (Chatto & Windus, 2013)

“This ripping yarn moves between Camden and Limehouse, Bermondsey and Notting Hill Gate, Borough and Shepherd’s Bush. The city’s greatest biographer takes us breathlessly between locations with hardly any attempt to develop his characters or explore their relationships. If this seems like a criticism it isn’t. Ackroyd achieves what he sets out to do: write a novel where the plot takes off with no excess baggage. Imagine Bleak House rewritten in less than 250 pages.”

“Three Brothers is an alternative autobiography, a ghost story and a murder mystery all in one slim volume. Dickens, Blake and Eliot – all subjects of lives by Ackroyd – cast shadows over the three-ply narrative that is full of chance and coincidence, “alliances and affinities”, “contenders and young pretenders”, shape-shifters and shirt-lifters. Offended? Then this clever, camp novel – which includes a chapter titled “Sausage Land” – is definitely not for you. Indeed the only sympathetic character in the whole gallery of grotesques is a light-fingered rent-boy known as Spark or Sparkle.”

“Ackroyd vividly conjures the dark alleys and vacant lots of 1970s Limehouse and Hackney. His pitch is urban, jagged: East End gangster memoirs, Gothic shockers and pulp fiction all add to the novel’s heady mix of influences. The prose is distinguished by its pithy turns of phrase and acute observation: a nun has an “expression of brutal amiability”; a politician exudes a “sort of charmless bonhomie”. Three Brothers, an amalgam of social satire and noirish thriller, is vintage Ackroyd.”

“London is a major character in the novel, from gay Soho pubs, discreet restaurants, the dark streets of Limehouse, to the drinking holes of Fleet Street as it was in its heyday, and posh but rotten Chelsea. In Ackroyd’s accomplished hands the city becomes a mystical place, where visions abound. Highly recommended.”

“…a fine old web of self-referencing. Daniel, for example, is gay (like Ackroyd), reads English at Clare College, Cambridge (ditto), has strong views about the feebleness of early 1970s English Studies (touché) and, once asked to write book reviews for the nationals, starts hanging out with a gang of literary hipsters known as the ‘Ancient Druids’, which sounds remarkably like the Christopher Hitchens/Clive James/New Statesman coterie anatomised in Richard Bradford’s recent biography of Martin Amis.”

“He may well have many readers who don’t even know of his early novels, The Great Fire of London, and Hawksmoor. They may know him best as the historian of London and the biographer of Dickens. If so, they will find much to enjoy in Three Brothers, a London novel which is permeated by Dickens. It isn’t Dickensian, in the sense in which that word is usually used. It’s cool and laconic rather than exuberant. But the themes – lost childhoods and crime – are Dickensian, and the novel is suffused with the author’s awareness of the strangeness and often loneliness of the bleak streets of London.”

“The novel’s plot is an exercise in noir, featuring a Rachman-type slum landlord whose suborning of a housing minister entangles each sibling in turn. This unsavoury side of swinging London is well-trodden territory, but Ackroyd manages to make it fresh. Some of this is due to his prose, which is simple yet possesses great consonance and depth.”

“It is hard not to think of both Harry and Daniel as imported characters from other novels, but this playfulness with literary history is even more apparent with the third of the brothers, Sam. Sam might almost be a refugee from a Salman Rushdie story, to whom strange things happen as he drifts around the streets, almost uneducatable and  unemployable. At times he appears an almost shamanistic character, as noted in the novel by the superstitious slum landlord Mr Rupta. Sam sees visions of a weeping Virgin Mary and even an entire East End nunnery, staffed it seems by the cast of Call the Midwife.”

“None of this is new terrain for Ackroyd, who has already written a stack of imaginative nonfiction books about London, and Three Brothers doesn’t have the energy and inventiveness of earlier novels like Hawksmoor. Ackroyd recently said that he works on history in the mornings, biography in the afternoons and fiction at night, and while this book is suffused with his intelligence and learning, it’s comfortably within his capabilities.”

“Ackroyd is less interested in the female characters. Guinevere, Harry’s wife, is so faint as to be hardly there, and his mother-in-law, Lady Flaxman, while given amusing dialogue, is flimsily motivated and presented with a shiver of physical disgust … Not that the male characters are more sympathetically drawn; a scene in a gay dive (homosexuality was still illegal at the time) is riotously smutty and funny, but no one there is admirable or likeable.”

“At its best, Ackroyd’s narrative is careful and referential, matched by a lucid prose unsurprised by the things it sees … Voices we recognise from London’s heritage of lively bad writing come and go. The reader is reminded as often of Jeffrey Archer as, say, Sax Rohmer and his colourful and problematic tales of Yellow Peril. But at their worst – in fact, increasingly as the plot unspools – prose, imagery and narrative all seem slapdash and cliched, and it’s sometimes hard to tell what’s pastiche from what isn’t.”

“Just about all of the main male characters are gay (including the straight ones) and one of the few female characters in Three Brothers is at pains to stress that she doesn’t like sex. Oh please. The tone gets increasingly camp and while there is nothing wrong with that, in the end you get the impression this is not a story set in the grandeur of London, so much as a small corner of Soho, in which everyone knows everyone else”

“The intention, presumably, is to charm, with a darkly whimsical, modern-day fairy tale. But Ackroyd, despite apparently basing much of the book on his life, is less comfortable writing about his own material than he is ventriloquising dead men, as many of his novels have done. The fustian prose style recalls Oscar Wilde’s children’s stories. “They played conkers” becomes: “They hardened the seeds of the horse chestnut with pickle juice and brine, so that they could compete with conkers.” Frustratingly, it is hard to see late-20th-century London for the anachronistic smog of Ackroyd’s prose.”