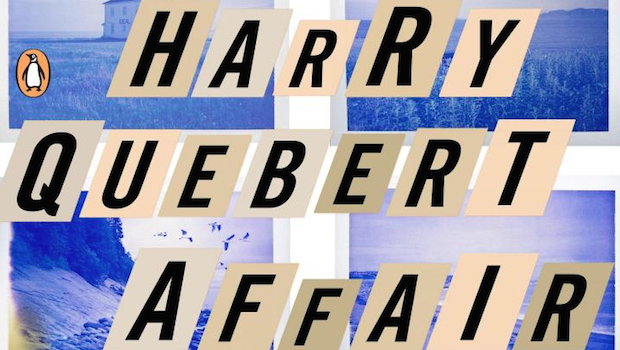 The Truth About the Harry Quebert Affair by Joël Dicker

Blurb: August 30, 1975. The day of the disappearance. The day Somerset, New Hampshire, lost its innocence. That summer, struggling author Harry Quebert fell in love with fifteen-year-old Nola Kellergan. Thirty-three years later, her body is dug up from his yard, along with a manuscript copy of the novel that made him a household name. Quebert is the only suspect. Marcus Goldman – Quebert’s most gifted protégé – throws off his writer’s block to clear his mentor’s name. Solving the case and penning a new bestseller soon merge into one. As his book begins to take on a life of its own, the nation is gripped by the mystery of ‘The Girl Who Touched the Heart of America’. But with Nola, in death as in life, nothing is ever as it seems. (MacLehose Print, May 2014)

“The blurring of truth and fiction is central to the spellbinding quality of this book, making it a top-class literary thriller that smoothly outclasses its rivals.”

“The tale is expertly told, as unreliable information dances with necessary plot shifts and unexpected moments of catastrophe. The central mystery (what kind of a woman was Nola to infatuate a whole New England town?) is intriguingly elusive, and the sexual tension is curiously, but pleasingly, restrained. As a result there is plenty of room in which the reader’s imagination can work and the plot keeps you guessing to the end – with a final twist of which Hitchcock would be proud.”

Daniel Hanh, The Independent on Sunday

“The Truth about the Harry Quebert Affair is a seductive read – big, assertive and clever enough to distract from the fact that it’s otherwise far more conventional than it might first seem. Dicker’s uncomplicated prose canters along confidently (with translator Sam Taylor smartly keeping pace); the plotting is pleasingly intricate, if occasionally also forced, untangling a bit on every page and then swiftly re-tangling again, offering strategic revelations of the community’s long-buried, secrets and then undermining them.”

“From the outset, the reader is propelled through the pages at a breakneck speed that never lets up until the final, inspired twist. Occasional forays into the far-fetched go almost unnoticed as suspicions shift from one inhabitant of the small community of Aurora to another, as one story contradicts another. About writing, fame, freedom, guilt, deception and madness, this is first and foremost an expertly realised, addictive Russian doll of a whodunnit.”

“This is a quietly compulsive thriller. It evokes life in small town New England exquisitely and Dicker’s characters from Marcus’s mother to Jenny Dawn who runs the local diner and Travis her policeman husband to broken Harry himself are brilliantly drawn.”

“A completely ordinary, amiably cartoonish and well aerated page-turner that does nothing interesting in literary terms at all … What the book does well is what all good thrillers should: it twists and turns.”

“Dicker has the first-rate crime novelist’s ability to lead his readers up the garden path. He pulled the rug out from under me so many times that I could sue him for damage to my coccyx. However I never really felt the sense of claustrophobic menace that I think Dicker was aiming for, perhaps because he is trying to do too much throughout the course of this rather long book. His satirical portrayal of the venal New York publishing scene is a bit heavy-handed and slows the book down.”

“Dicker’s big finish — twist after twist after twist, revealing that just about everybody in seaside New Hampshire has something hideous to hide — is neatly and entertainingly pulled off. To get to this borderline-plausible conclusion, however, readers must keep straight innumerable flashbacks and flash-forwards and novels within novels, many of which feel redundant. It doesn’t help that pompous, emotionally unstable Quebert is hard to stomach as he mourns the lost Nola, with whom he was planning to elope the day she vanished.”

“This isn’t quite Dan Brown levels of bad writing but it runs him pretty close. Sam Taylor’s translation seems faithful and true but I can’t imagine these things sounding much better in French. The big problem is that Dicker, or his publishers, thinks he’s doing something rather more clever than he actually is. The novel has been described as a “postmodern thriller” because it is structured as a series of books-within-books, nestling within one another like Russian dolls. And yet, like a Russian doll, it’s all rather too full of itself.”

“The general understanding of life here, delivered in the form of sententious pronouncements about love and literature, doesn’t attain the heights commanded by Jeffrey Archer. The delusion that the book is deeply literary comes solely from the fact that it is ostentatiously about writers, despite its treatment of them — the way they work, how literary success is achieved — being completely unrealistic and trashy. Clever! Not really. Almost the opposite…”

“The chapters begin with a dialogue in which Quebert offers his disciple rules about writing, but it is impossible to believe that anyone whose speech is so riddled with clichés could possibly be a towering figure of American letters … The most irritating feature of this spectacularly awful novel, though, is its dependence on increasingly incredible plot twists.”