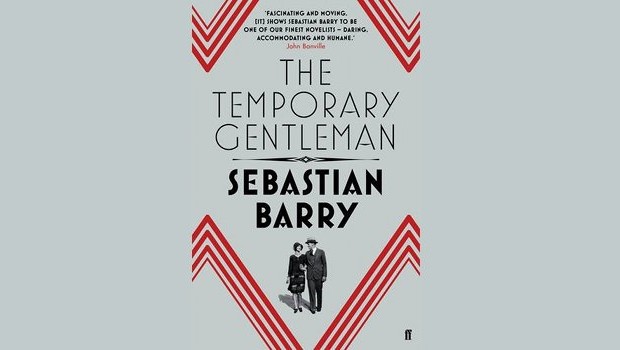 The Temporary Gentleman by Sebastian Barry

Blurb: Jack McNulty is a ‘temporary gentleman’, an Irishman whose commission in the British army in the Second World War was never permanent. In 1957, sitting in his lodgings in Accra, he urgently sets out to write his story. He feels he cannot take one step further, or even hardly a breath, without looking back at all that has befallen him. He is an ordinary man, both petty and heroic, but he has seen extraordinary things. He has worked and wandered around the world – as a soldier, an engineer, a UN observer – trying to follow his childhood ambition to better himself. And he has had a strange and tumultuous marriage. Mai Kirwan was a great beauty of Sligo in the 1920s, a vivid mind, but an elusive and mysterious figure too. Jack married her, and shared his life with her, but in time she slipped from his grasp. (Faber & Faber, March 2014)

“This novel is an elegy – not for a temporary gentleman but for his wife. The prose has the black-bordered elegance of a Victorian mourning letter yet it is, at the same time, a restless recollection of the life of a couple – animated but doomed. It is written with a redeeming artistry – almost as if good writing might have the power to save a marriage or contain the secret of happiness. It manages, with the lightest of touches, to be a politically adroit sketch of Ireland and of colonial Africa in the last century.”

“The Temporary Gentleman is a novel of dissolution. But the poetry of it all is so strong-pulsed that we find ourselves lost in language: “The sun all summer long pouring yellow light into the cups and bowls of the land, and every Sligo child was roasted red on the strands.” Like the martyred Mai, we are (almost) as entranced by “bad” Jack’s way with words as he is. It’s a terrible pleasure. It is meant to be so.”

“The conclusions of Sebastian Barry’s novels can sometimes disappoint, and readers may find the hairpin turn at the close of this one unsatisfying. It is fitting, however, for a tale that begins with such velocity to end on an emergency stop. The subject of The Temporary Gentleman is historical uncertainty; the uncertainty we are left with as we put down this devastating book is unnervingly appropriate.”

“Jack is writing his own history, and while clearly he cannot change or forgive his past, he can choose to describe it either in all its grim contradictions or with fine shades of special pleading. In a sense, he tries to become his own novelist, and this seductive ploy is very finely controlled by Barry, who has no intention of letting his character define the narrative and tell us “what really happened”. Jack skates over things and hides things from us. For all his apparent candour and crispness of diction, he can be sly. The entrancing richness of Barry’s prose is tempered in this novel, and it marks a new range in his work.”

“The novel seems part of something bigger, almost a prelude, in fact; and this is not a flaw but, rather, an indication that new life is being breathed into the Barry project. Watchers have been planted within the text in the shape of Jack and Mai’s two unfortunate daughters, Maggie and Ursula. They are almost entirely silent: terrified children in an adult world, witnesses to misery and – in one vicious episode – subjected to violence. They appear at windows, or at the top of stairs, observing their parents’ abject state as they drink themselves into oblivion. Their presence is electric, because you know that it is only a matter of time before Barry will get round to telling their stories.”

“The couple’s long and painful journey to ruin and misery is inevitable and all the more harrowing for that, with the reader growing as frustrated by Jack as he is with himself, but pitying him none-the-less. Told in Barry’s flawless prose, it’s a book that leaves the reader bruised long after the final page has been, regretfully, turned.”

“The main joy, notwithstanding the page-bypage entertainment offered by the fine writing, is in the slowly built, fully human characters.”

“Jack himself, who isn’t a character so much as a collage of Irish prose styles. He can do a mean James Joyce (compound words and classical intertextuality), Samuel Beckett (unrelenting self-examination) and a pretty good Sebastian Barry … This is a demanding novel about masculine failure that frustrates and beguiles, often in the same meandering sentence.”

“To be honest this makes for an awful lot of Jack McNulty who is not the easiest man to like or, more damagingly, care about. It took some time for me to feel that the reading came easily, where I did not have a desire to put the book down for a little rest, if nothing else than to ease the feeling of ceaseless journeying. And another reason for this stems from one of the risks that Barry has taken. As Jack himself says towards the end: “I am humbled by my account of my own doings but it is to a great degree the history of a bad man.” And a bad man can have his limitations, for him and for us.”

“Barry’s pumped-up prose seems designed to inflate the importance of his themes. Each of Jack’s wartime calamities, for instance, is described in a single, distended sentence sprawling over several pages — a mixture of Joycean stream-of-consciousness, sub-Dylan Thomas phrasing (“the night-filthied coast of Africa”) and Barry’s own blend of obscurity (“blankening stars”) and repetition (“and then nothing, nothing, nothing”).”

The Temporary Gentleman by Sebastian Barry The Omnivore