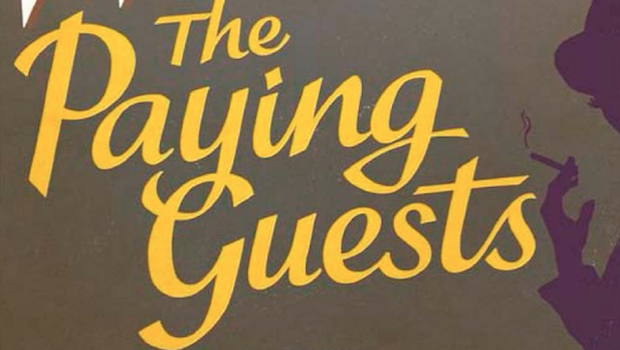 The Paying Guests by Sarah Waters

Blurb: It is 1922, and London is tense. Ex-servicemen are disillusioned, the out-of-work and the hungry are demanding change. And in South London, in a genteel Camberwell villa, a large silent house now bereft of brothers, husband and even servants, life is about to be transformed, as impoverished widow Mrs Wray and her spinster daughter, Frances, are obliged to take in lodgers. For with the arrival of Lilian and Leonard Barber, a modern young couple of the ‘clerk class’, the routines of the house will be shaken up in unexpected ways. And as passions mount and frustration gathers, no one can foresee just how far-reaching, and how devastating, the disturbances will be. (Virago, August 2014)

“The nested coincidences like Russian dolls, the misunderstandings on which our lives can tilt, the infinitely regrettable moments: Waters makes us ache for every one. Whether it’s Mrs Dalloway’s lost love or Thérèse Raquin’s burgeoning horror, The Paying Guests reminds us of every great novel we’ve gasped or winced at, or loudly urged the protagonists through, and it does not relent.”

“What adds to the grip of the white-knuckle plot is Waters’s flair for involving you with her characters by making them engrossingly believable — and complex.”

“Some novels are so good, so gripping or shattering that they leave you uncertain whether you should have ever started them. You open The Paying Guests and immediately surrender to the smooth assuredness of Sarah Waters’s silken prose. Nothing jars. You relax. You turn more pages. You start turning them faster. Before long, you resemble Coleridge’s Wedding-Guest: You cannot choose but read. The book has you in thrall. You will follow Waters and her story anywhere. Yet when that story ends, you find yourself emotionally sucked dry, as much stunned as exhilarated by the power of art.”

“The rest of the novel is more conventional, segueing into a crime novel, including the kind of police interviews and courtroom scenes that make you cover the page so you don’t accidentally read ahead. Frances and Lilian are physically separated, and the fragile bond they had established is stretched to breaking point. This part is perhaps more sketchily written than the first, but it may simply be that I was reading faster, helplessly pulled along by the magnetic storytelling.”

“The whole novel rolls along nicely, gathering momentum as it proceeds. If Frances can be mawkish about her lover, the sentimentality is the character’s and not the author’s. The high quality of the writing is seamlessly consistent; even the sex scenes manage some serious viscosity without being embarrassing. Waters sets her tale in the time effortlessly. The past was once the present; the 1920s was once as “modern” as modern could be. Waters is a dab hand at conveying that immediacy, with no whiff of mothballs, no browning of the vista with a sepia tint. A lot of work must have gone into writing this novel but it is no labour at all to devour. “

“No reviewer of Waters’s books dare spoil things by revealing the plot. It is enough to declare that a death ensues, and a crime storyline dominates, which places at risk much more than the women’s romantic aspirations. Peter Brooks memorably defined Balzac’s characters as predominantly ‘desiring machines’ whose urges relentlessly propelled his plots onwards. Waters’s figures act similarly – though the sense of social prohibition and shame obstructs the realisation of their desires to a greater extent. The Paying Guests demonstrates the writerly qualities for which Waters is esteemed.”

“The world so vividly described by Waters, with its oppressions and seething undercurrents of class and sexuality, is recognisably that of Elizabeth Bowen and Dame Ivy Compton-Burnett. Her novel lacks their shocking originality but its recreation of that liminal era is a virtuoso feat of storytelling.”

“ The novel plays on the ways in which both crime novels and domestic novels explore motive, on the sense of early forensics as being about finding out what other people mean, how events and personalities have multiple constructions. For Lilian and Frances, hiding in plain sight, their very boldness makes their actions less obvious to the outside observer.”

“A lengthy novel, The Paying Guests takes a while to really get going and the first third could arguably be much shorter. However, when the drama kicks in, it’s worth the wait … The novel’s conclusion when it arrives is satisfying, if slightly predictable and the loose ends are nicely tied. A great rainy day read, The Paying Guests is raunchy, romantic and thoroughly entertaining.”

“hile Waters’ legions of fans will enjoy the ride, they may find it slightly short of her very best work and that the ending doesn’t quite live up to what precedes it. She produces a deus ex machina to bring the court case to an unconvincing end and I wanted more about Lilian’s ambiguous motives. Waters has described The Paying Guestsas a love story; perhaps it should have been more of a crime story.”

“It becomes clear that the delicate tension between two distinct female types – both of them compromised, yet both yearning for autonomy – in the dawn of the women’s rights movement is simply a strategy for fanning the flames as Frances and Mrs Barber progress towards an affair. Waters’s plain-spoken description of this relationship immediately begins to undermine the novel’s integrity as a period piece: the sexual perspective is designed for the modern reader, and starts to resemble a costume drama. Its pastiche propriety and faux-Edwardian prose (people are forever “colouring” and “crimsoning” and “putting themselves tidy”) become irritants; and the novel’s descent into melodrama as a murder is committed – and the inspector called – turns this engaging literary endeavour into a tiresome soap opera.”

“Characterisation has a hint of familiarity, as if characters have been derived from Waters’ bank of past creations, and they lose some of their gleam for it, though the story stays emotionally-charged. Is Frances a reincarnated, gay version of the mannish spinster who is unable to cut the apron strings in The Little Stranger, Waters’ fifth, Man Booker shortlisted novel? Is this home – a character in its own right – like the haunted house in The Little Stranger (set in late 1940s Britain), also plagued by the undead, but this time by the ghosts of the Great War?”

“The Paying Guests is twice as long as it should be. It’s nearly 100 pages longer than The Night Watch, in which Waters entwined the stories of four Londoners during the Blitz without losing pace.There are a number of skilful cameos in The Paying Guests — faded, suspicious Mrs Wray; Mrs Viney, Lilian’s bloated, life-affirming Cockney mother; Len Barber, leering and dissatisfied but somehow still likeable — but there are only two fully developed characters, and neither Frances nor Lilian are interesting enough to be stretched over 563 pages. The first half is a convincing and absorbing immersion in particular lives at a particular time; the second sags like an overloaded washing line.”

The Paying Guests by Sarah Waters The Omnivore