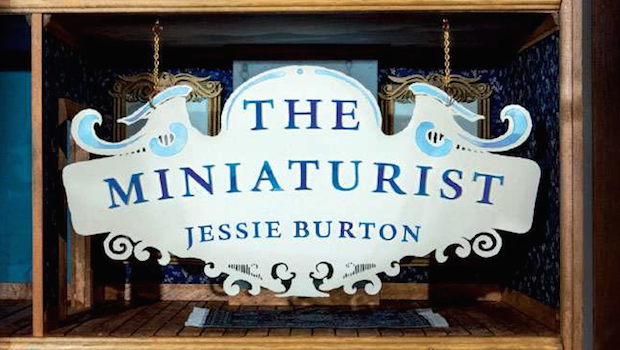 The Miniaturist by Jessie Burton

Blurb: On an autumn day in 1686, eighteen-year-old Nella Oortman knocks at the door of a grand house in the wealthiest quarter of Amsterdam. She has come from the country to begin a new life as the wife of illustrious merchant trader Johannes Brandt, but instead she is met by his sharp-tongued sister, Marin. Only later does Johannes appear and present her with an extraordinary wedding gift: a cabinet-sized replica of their home. It is to be furnished by an elusive miniaturist, whose tiny creations mirror their real-life counterparts in unexpected ways… Nella is at first mystified by the closed world of the Brandt household, but as she uncovers its secrets she realizes the escalating dangers that await them all. Does the miniaturist hold their fate in her hands? And will she be the key to their salvation or the architect of their downfall? (Picador, July 2014)

“As a novel, The Miniaturist is not flawless. I don’t think Burton quite pulls off the magic — or the illusion — and some of the characters waver in and out of focus in a way that does not seem totally intended. Still, the book is always entertaining, intriguing and suspenseful. This is a debut novel; we may perhaps look forward to even more assured entertainment from Jessie Burton in years to come.”

“Burton’s tantalising debut is beautifully poised, exquisitely detailed. She delicately plays out the drama inside the house and deftly describes the dangerous encroachments of the outside world, from the machinations of the miniaturist, with her “strange alchemy of craftsmanship and spying”, and the murderous hypocrisies of a supposedly pious society.”

“A miniaturist of sorts herself, Burton is drawn to the details. Every sentence is a gorgeous, finely turned thing, and domestic snapshots come straight from Vermeer or Dutch still lifes. Occasionally the writing sags under the weight of its own conceits, but the descriptions are so lovely that it’s easily forgiven. Counterbalancing all this filigree work is a bold plot. There’s no room for longueurs, even in 400-odd pages. It makes for a gripping read – there’s a tense trial at its heart – but it can feel a touch forced. Almost every kind of bigotry is stuffed in for scrutiny.”

“Burton’s descriptive powers are formidable and the pleasure of her narrative resides mainly in her ability to convey the strange power of inanimate objects: their heft, texture and mute resonance. With the animate she is less successful. There is no reason to suppose that the young women of 17th-century Holland were any less personable than their 21st-century counterparts but the character of Nella is an odd construct of modern liberal sensibility clad in the shawl and patterns of old Amsterdam.”

“As events engulf them, the characters in The Miniaturist never quite convince. There are some wonderful set pieces, notably a strikingly affecting trial, but while Burton is meticulous in exposing their human failings she is less successful at showing us their hearts: too often they act to serve the plot rather than create it. As for Nella, unlike Chevalier’s Griet, she is simply not a creature of her own times. Secular, forthright, resolutely open‑minded even by contemporary standards, she is a modern heroine in period dress.”

“The Miniaturist has a singular and vivid setting, and by rights it should beguile utterly. Jessie Burton – this is her first novel, and it comes with a great deal of hype, having been sold in 30 countries – has clearly done a lot of research; she has even given us a glossary. But for all its conceits and ingenuity, for all the lovely passages to be found among its pages, somehow it fails to convince. Again and again, I found myself thinking: that would not happen. ”

“How can the miniaturist know so much about the Brandt secrets? Disappointingly, we never fully find out. Burton sets up an enticing mystery, but she seems to grow bored with it, scarcely bothering to provide any explanations, either natural or supernatural, of the woman’s identity and her odd ability to see and foresee what is happening to Nella and her new family.”

The Miniaturist by Jessie Burton The Omnivore