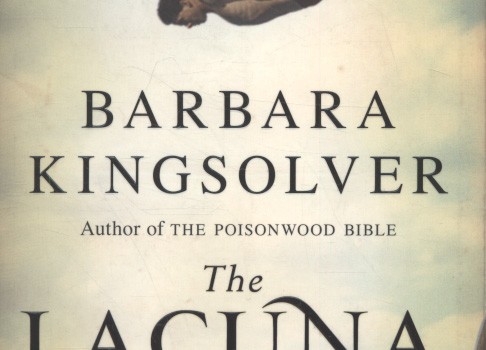 The Lacuna by Barbara Kingsolver

Blurb: Born in the U.S. and reared in Mexico, Harrison Shepherd is a liability to his social-climbing flapper mother, Salome. Making himself useful in the household of the famed Mexican artists Diego Rivera and Frida Kahlo, and exiled Bolshevik leader Lev Trotsky, young Shepherd inadvertently casts his lot with art and revolution. A violent upheaval sends him north to a nation newly caught up in World War II. In the mountain city of Asheville, North Carolina he remakes himself in America’s hopeful image. But political winds continue to throw him between north and south, in a plot that turns many times on the unspeakable breach – the lacuna – between truth and public presumption. (Faber & Faber)

Nina Lakhani, The Independent on Sunday

“Every few years, you read a book that makes everything else in life seem unimportant. The Lacuna is the first book in a long time that made me swap my bike for public transport, just so I could keep reading… The Lacuna unfolds more slowly than many of Kingsolver’s previous books, but every word and twist has earned its place in this provocative and beautifully told story.”

“Page after page of this novel tingles with obliquely witty yet deadly serious conversation that is a joy to read, with the only cavil that it can make Frida Kahlo and an old Jewish lawyer in Asheville, North Carolina sound strangely similar… [Kingsolver] deserves a greater critical reputation on this side of the Atlantic, which, we must hope, The Lacuna will now bring. It is a novel worth waiting a decade for.”

“Barbara Kingsolver’s new novel begins with a nod to her most famous, The Poisonwood Bible. Arguably, though, The Lacuna is even more engrossing… As with The Poisonwood Bible, Kingsolver’s ventriloquism is superb: quick-fire dialogue and full-bodied slang snaps and muscles off the page. Talk, however, is cheap, and it is the silences that movingly come to dominate in a tale full of intriguing lacunae.”

“Breathtaking… The Lacuna can be enjoyed sheerly for the music of its passages on nature, archaeology, food and friendship; or for its portraits of real and invented people; or for its harmonious choir of voices. But the fuller value of Kingsolver’s novel lies in its call to conscience and connection. She has mined Shepherd’s richly imagined history to create a tableau vivant of epochs and people that time has transformed almost past recognition. Yet it’s a tableau vivant whose story line resonates in the present day, albeit with different players. ”

“In many ways The Lacuna, her first full-length novel since, is a companion piece [to The Poisonwood Bible], another indignant and erudite tale of past American folly and present denial that sidesteps a hectoring tone thanks to its author’s ability to create truthful, fullbodied people. Addressing more current issues than it is possible to illuminate here (most notably the climate of fear as hollered by a howling media), this is urgent, political storytelling that confirms Kingsolver as one of the most important contemporary writers.”

“…this rich novel is certainly bigger than its politics. It resurrects several dramatic events of the early 20th century that have fallen out of public consciousness, brings alive the forgotten details of everyday life in the 1940s, and illustrates how attitudes and prejudices are shaped by political opportunism and the rapacious media. But despite this large, colorful canvas, ultimately “The Lacuna” is a tender story about a thoughtful man who just wanted to enjoy that basic American right: the right to be left alone.”

“[A] remarkable novel… Weaving the stories of real-life characters into a work of fiction is fraught with difficulty but Kingsolver, with her meticulous research and keen eye for historical detail, succeeds magnificently. The only stumbling block is that the larger-than-life Kahlo and Trotsky … are more enthralling than Shepherd.”

“Kingsolver’s portrayal of this period, and of Mexico in general is lush, tottering over with heady imagery. The “tiny tempest” Kahlo, her giant frog of a husband, and the fatherly Trotsky, once head of the Red Army, now cheerfully tending his chickens, who fatefully “clasps a pen as if it were an axe handle”, are unforgettably brought to life. This passion falters and pales when Harrison becomes a more independent character — escaping to “Gringolandia”, the USA, after Trotsky’s murder — as if he cannot hold his own without genuine historical figures.”

“[The] early sections of the novel … are lyrical and compelling… What is frustrating about The Lacuna is that the emotional heart of the story seems to retreat, to do a disappearing act almost halfway through the book. Given the central image of the underwater cave into which people disappear, and which seems itself to vanish at high tide, this cannot be a coincidence.”

“There are some lapses into gum-cracking, slang-filled dialogue, and the latter half of the book, which takes place in North Carolina, suffers from the relative insipidity of the setting. The most compelling moments occur when Trotsky, in exile and fearing assassination, takes refuge with Rivera and is seduced by Kahlo. Kingsolver’s descriptions of life in Mexico City burst with sensory detail…”

“This book grabs at the heartstrings, and you would give it to a 13-year-old without hesitation . . . except for that nagging problem of historical truth. Even a card-carrying leftie cannot swallow the airbrushed portrait of Trotsky, in reality a boundless egotist and architect of ruthless collectivization, as a social-democratic Santa Claus.”

“Kingsolver, who has spoken in a recent US interview of a post-9/11 backlash “against my identity as a political artist”, offers a timely re-reminder – for those who need it – of an era when surrealist art could be condemned as “un-American”, and foreigners deported for “working for Negro rights”… Yet the novel’s later sections are marred by overstated irony, the dialogue too often staged between characters who agree, making for an authorial soapbox.”

“It is an admirably ambitious work spanning a fascinating period of history, but it lacks the strong characterisation that made The Poisonwood Bible such a success… Kingsolver allows history to dictate the characters, rather than the other way around. The brain is engaged by this account of a tumultuous period in our recent past, but the heart remains largely untouched.”

“Shepherd, writer and protagonist, remains frustratingly illusive (sic), described in fragments – diary entries, letters to and from Kahlo, media reports – which are like disembodied limbs pasted together in an attempt to create a full-bodied portrait. Perhaps it is the success of a novel that seeks to prove the impenetrability of its central subject that also serves as its failure.”

“Kingsolver has done her research, and it shows. Every detail of every decade is faithfully chronicled and recorded, rather than evoked. Howard Hughes lands a light plane, inadvertently causing the death of Shepherd’s mother. Shepherd himself lives not far from a hospital that houses Zelda Fitzgerald. The kidnap of Lindbergh’s baby is mentioned, and so on. The result is a relentless pop-cultural history lesson.”