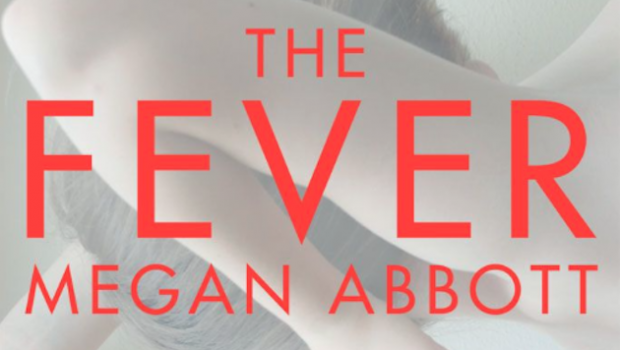 The Fever by Megan Abbott

Blurb: Her hands flying up, she grabbed her throat, her body jolting to one side. Then, in one swoop, her desk overturned, clattering to the floor. And with it Lise. Her head twisting, slamming into the tiles, her bright red face turned up, mouth teeming with froth. “Lise,” sighed Mrs. Chalmers, too far in front to see. “What is your problem?” The Nashes are a close-knit family. Tom, a popular teacher, is father to the handsome, roguish Eli and his younger sister Deenie, serious and sweet. But their seeming stability is thrown into chaos when two of Deenie’s friends become violently ill, and rumours of a dangerous outbreak sweep through the whole community. As hysteria swells and as more girls succumb, tightly held secrets emerge that threaten to unravel the world Tom has built for his kids, and destroy friendships, families, and the town’s fragile idea of security. (Picador, July 2014)

“While dealing with some of the same themes, this seventh novel is more expansive, more thoughtful, more ambitious and psychologically deeper than anything she’s written before, and that’s saying something.”

“The plot takes dark, scary turns that arise from the everyday turmoil of female adolescence. That these all feel terrifyingly plausible can be attributed to Abbott’s masterful writing. Once again, she demonstrates an uncanny ear for the voice of youth, breathing life into every whispered confession, even every mashed-out text. She’s a unique talent with a signature style that gets stronger with every book. With its confident plotting and lyrical prose, The Fever may be her best novel yet.”

“Few readers are going to be seriously drawn in by the drama of which high school kid has a crush on which other. It’s the book’s constant throb of horror that keeps it gripping. These girls, already both mightily aware of and spooked by their new sexuality, have to listen to a sex-ed lecture on HPV delivered with a stunning lack of empathy. They are shown a diagram of a cervix and told: “See how wide this area is? At your age, this is the area most vulnerable to invasion. It’s utterly exposed. In a few years, it will retract. You’ll be safer.” But “until then,” the teacher adds, as unhelpfully as she can, pointing to a sink handle, “you are as open as the mouth on that faucet.””

“Abbott, whose previous novel, Dare Me, featured a squad of high-school cheerleaders, has a knack for capturing the emotional landscape of the teenage girl in a way that is terrifyingly, appallingly real.”

“The concerns in Abbott’s work are sensationalist rather than moral. Still, this book’s punitive view of female sexuality is worth noting for its kinship with nonfiction writers like Caitlin Flanagan, Wendy Shalit and Laura Sessions Stepp, who argue that young women should protect themselves from the complications of sex by treating their sexuality as merely a minor component of monogamy.”

The Fever by Megan Abbott The Omnivore