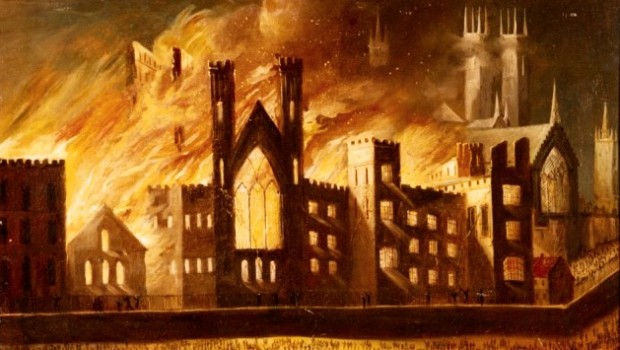 The Day Parliament Burned Down by Caroline Shenton

Blurb: In the early evening of 16 October 1834, to the horror of bystanders, a huge ball of fire exploded through the roof of the Houses of Parliament, creating a blaze so enormous that it could be seen by the King and Queen at Windsor, and from stagecoaches on top of the South Downs.

In front of hundreds of thousands of witnesses the great conflagration destroyed Parliament’s glorious old buildings and their contents. No one who witnessed the disaster would ever forget it. The events of that October day in 1834 were as shocking and significant to contemporaries as the death of Princess Diana was to us at the end of the 20th century – yet today this national catastrophe is a forgotten disaster, not least because Barry and Pugin’s monumental new Palace of Westminster has obliterated all memory of its 800 year-old predecessor. Rumours as to the fire’s cause were rife. Was it arson, terrorism, the work of foreign operatives, a kitchen accident, careless builders, or even divine judgement on politicians? In this, the first full-length book on the subject, head Parliamentary Archivist Caroline Shenton unfolds the gripping story of the fire over the course of that fateful day and night.

“Scholary but gripping … Tracing the events of that night hour by hour, Caroline Shenton’s book recreates the suspense and drama so well that it is easy to forget that we know what happened in the end .. The vividness of Shenton’s description comes from the wealth of first-hand testimony she has accumulated.”

“Excellent … In chapters headed with each successive hour of the fire’s inexorable progress, she charts the frenetic and misguided efforts of staff and firemen to douse the inferno and snatch papers and property from the flames. Slipped into this saga are background snippets to explain how the Mother of Parliaments got itself into this granddaddy of a mess in the first place.”

“For the thousands who watched it, it was the most dramatic experience of their lives, a spectacle of awe, horror and curious beauty. But is it worth a whole book? Yes, indeed – Caroline Shenton proves so. She is its ideal chronicler because she is Clerk of the Records at the Parliamentary Archives, an expert on the Old Palace of Westminster which was replaced by the iconic building we now know.”

“The strength of Shenton’s book is that it gives us a true sense of the riches that were lost with the fire. Even Pugin’s picture-book Gothic in the House of Lords was no match for the real thing: the painted chamber of Henry III had been among the wonders of medieval Europe … No one has written about the burning of Parliament before, and this vivid, superbly researched book is a definitive account of one of the greatest cockups in English history.”

“A truly remarkable read … One of the most interesting aspects of Shelton’s book is the reaction of those who witnessed and fought its fury. The inferno, which could be seen from as far away as the South Downs, attracted tens of thousands of spectators, including Charles Dickens and JMW Turner, who made preliminary sketches from a boat on the Thames before painting a remarkable watercolour.”

“Pulling together a huge amount of detail — she is clearly comfortable in the dustier corners of the archives — her book is deeply researched (sometimes too deeply) yet surprisingly gripping. What is instantly apparent is just how shambolic and unloved the old Houses of Parliament actually were.”

“As this well-researched and well written account makes clear, the Westminster on view today is the result of one extraordinary accident. The Houses of Parliament are uniquely the product of Pugin’s and Barry’s imaginations.”

The Day Parliament Burned Down by Caroline Shenton The Omnivore