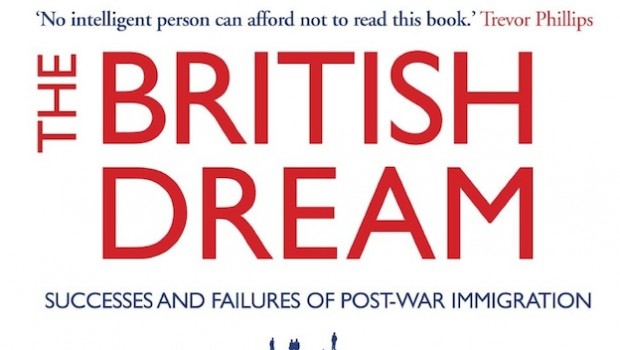 Blurb: David Goodhart tells the story of post-war immigration and charts a course for its future. Drawing on hundreds of interviews with people from all over the country and a wealth of statistical evidence, he paints a striking picture of how Britain has been transformed by immigration and examines the progress of its ethnic minorities – projected to be around 25 per cent of the population by the early 2020s. Britain today is a more open society for minorities than ever before, but it is also a more fragmented one. Goodhart argues that an overzealous multiculturalism has exacerbated this problem by reinforcing difference instead of promoting a common life. The multi-ethnic success of Team GB at the 2012 Olympics and a taste for chicken tikka masala are not, he suggests, sufficient to forge common bonds; Britain needs a political culture of integration. Goodhart concludes that if Britain is to avoid a narrowing of the public realm and sharply segregated cities, as in many parts of the US, its politicians and opinion leaders must do two things. Firstly, as advocated by the centre right, they need to bring immigration down to more moderate and sustainable levels. Secondly, as advocated by the centre left, they need to shape a progressive national story about openness and opportunity – one that captures how people of different traditions are coming together to make the British dream. (W. W. Norton & Co.)

Why the left is wrong about immigration | David Goodhart | Guardian

“Well-written, thoughtful and exhaustively researched, his volume will come to be regarded as one of the most important contributions to political debate in the early 21st century. He demolishes the myths created by the liberal elite about immigration, exposes the lies and contradictions, and suggests a way forward. Though he tells us many shocking things, he expresses himself in a measured and sober way.”

“Even in their apologia, these metro-liberals are arrogant. But still, better that one sinner repenteth etc, and this is an intelligent and well-reasoned (for the most part) assault upon the delusions that held sway among Goodhart’s fellow bien pensants and indeed had a certain hegemony, until recently, among all three main parties in parliament … The book concludes with one or two suggestions as to what we do next … It is about better managing the numbers and speed of immigration, and this is the most convincing chapter”

“Goodhart believes, like social scientists Robert Putnam and Alberto Alesina and Britain’s universities minister David Willetts, that there is a limit to how much diversity a welfare state can tolerate. When people hear the word solidarity today, he warns, they may “think only of faceless bureaucrats trying to tax them on behalf of people they no longer feel any connection with”. There is a risk in saying such things about immigration. One closes Goodhart’s book, though, believing there is a bigger risk in not saying them.”

“If anything has discredited liberalism, it is the degree of social engineering that Goodhart’s prescriptions imply. Immigration controls in the UK are not too loose but too tight. There are losers from immigration, as there are from any social change. But the most settled communities of all are those that lack ambition and restrict the means to realise it — principally education and labour mobility. That is why Goodhart’s call to imbue liberalism with solidarity does not succeed. Those values work against each other.”

“Goodhart, the founding editor of Prospect magazine, is not in principle against immigration, and indeed is at pains to stress his Leftish-liberal background. Yet anyone reading this might conclude that he shares the opinions of foreigners held by Cheltenham colonels, if not the Right wing of Cameron’s cabinet. The book, written in a sort of think-tank journalese (“global post-national ethos”), is nevertheless a useful guide to the vagaries of our mixed-up, mixed-race nation.”

“Many elements of this narrative are questionable … David Goodhart is not exceptional in these views, and some of his ideas — like free English lessons for newcomers — are excellent. But The British Dream raises the question as to whether someone who believes in quite so much exclusion and compulsion is any kind of liberal.”

“Disappointing … He makes a few fair although far from original points, about the weakening of communal links and the way our nervous multiculturalism ignored Islamic extremism and overlooked intolerable practices. But essentially The British Dream is just the stale suspicion of foreigners dressed up in intellectual clothing and given a slight twist to the left.”