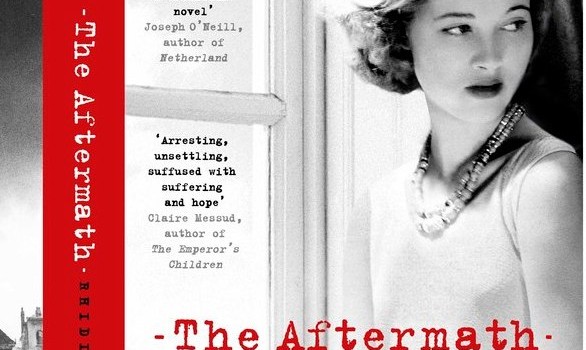 The Aftermath by Rhidian Brook

Blurb: Hamburg, 1946. Thousands remain displaced in what is now the British Occupied Zone. Charged with overseeing the rebuilding of this devastated city and the de-Nazification of its defeated people, Colonel Lewis Morgan is requisitioned a fine house on the banks of the Elbe, where he will be joined by his grieving wife, Rachael, and only remaining son, Edmund. But rather than force its owners, a German widower and his traumatized daughter, to leave their home, Lewis insists that the two families live together. (Viking)

“Brook’s narrative perspective travels between characters: its uneasy compassion carries the reader across “clear lines of demarcation”. We are forbidden to take sides. A macaronic feel characterises the juxtaposition of the occupiers’ pidgin-German with the uncertain English of the conquered. A tribe of feral orphans scavenges in Hamburg’s ruins. “Fuck your arse, Captain!” the urchins bawl, exercising English gleaned from the Tommies.” Read full review

“Based on real family events, Rhidian Brook has evoked a much-overlooked episode of history where a new order must be established, and trust re-learnt. An extraordinary read.” Read full review

“The strength of this novel lies in its superb management of the various lines of narrative tension, alongside a painfully clear portrait of Germany in defeat, conjuring surprise after surprise as it shows how the forces of politics and history penetrate even the most intimate moments of its characters’ emotional lives. By the end of the novel they seem as exposed as those embracing skeletons, and the new Germany is glimpsed, just visible beyond the interminable piles of rubble.” Read full review

“Edmund and Freda, Rachael and Stefan are unexploded bombs. Placed together in the house, they detonate each other, and Brooks handles the often shocking turn of events with a spareness matched to the harshness of that winter. This is the novel’s strength, and what I most liked about it, but also its weakness. At times, when your heart should be breaking, it can feel too chilled to respond. There is much to think about though, here. It is a moral book but not a moralising one. ” Read full review

“Brook addresses weighty themes – forgiveness, familial loss – with a light touch. I found the colonel’s goodness somewhat unconvincing; but the central romance is sensitively handled, and the chapters that deal with Lewis’s young son Edmund, who scampers around the city’s ruins with a band of “feral” boys, bring to mind no less a novel than JG Ballard’s Empire of the Sun.” Read full review

“For the reader the problem isn’t the absence of explosions but something less easily remedied, a lack of subtlety. There’s a sense of missed opportunity, with a promising situation thinly developed. Brook’s family history may have handed him The Aftermath more or less on a plate, but it’s still possible to have doubts about his cooking technique, presentation skills, choice of garnish.” Read full review

“While the backdrop here is intriguingly stark, the foreground stubbornly fails to ignite. Part of the problem is that the sinews of Brook’s plot simply aren’t strong, or clear, enough. There are brief flurries of tension, but it’s never long before they sink into the dust. And there’s a similar unevenness about the writing. At times it’s richly atmospheric, at others throbbingly melodramatic. The biggest problem, though, is that priggish and passive Lewis and Rachael are drawn with such careful dabs of monochrome that I yearned for splashes of colour.” Read full review

“The writing of this powerful novel is beautiful, the scene-setting cinematic. If only, occasionally, the characters didn’t feel a tiny bit flat.” Read full review

“The characters might have been fleshed out a little more fully; too often, they are neatly divided into good and bad depending on how tolerant they are of the Germans but there is room for a more nuanced approach.” Read full review