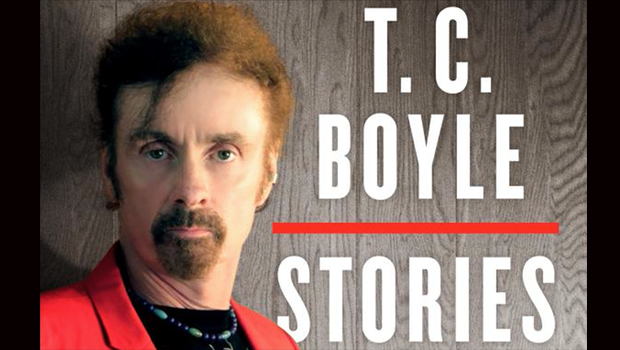 Blurb: A man falls from a roof whilst spying on his beautiful widowed neighbour. A newly married couple seeking enlightenment take a three year vow of silence and move to a yurt in the Arizona desert. A handsome young man works in real-estate by day, but has a far more sinister profession by night. An elderly woman is determined to return to her home in the countryside, despite the knowledge that in doing so she may be signing her own death warrant. Giant men are kept in cages to ensure their nightly service to their country. A man develops an unhealthy interest in his recently deceased reclusive rock-star neighbour. And on Christmas day at the San Francisco Zoo a terrible and tragic event occurs… T.C. Boyle Stories II comprises three later volumes of short fiction – After the Plague, Tooth and Claw and Wild Child – along with a new collection, A Death in Kitchawank. (Bloomsbury, 2013)

“Stories II brings together 58 tales first printed in magazines such as the New Yorkerand the Paris Review, with not one a dud.”

“This is an admirable collection, not least for its titanic strength. While I began to wish that Boyle were more adventurous in his vocabulary (although he has an odd preference for “tegument” over covering, he prefers to keep things simple), this is an important book that contains revelation, tension and beauty, even if reading it can feel like being arm-wrestled by a giant.”

“T. C. Boyle Stories II is like a famous band’s CD box set — there’s much more in here than anybody but an obsessive fan will want, and the quality is all over the place. When Boyle gets on a roll, the stories burst into three dimensions, and there are at least a half-dozen or so that catch him near maximum power, with many more a notch below. I scored each on a scale of 1 to 10 (I had to keep track somehow), and the lone 10 went to a story from “After the Plague”: “The Underground Gardens,” about a luckless Sicilian immigrant named Baldasare Forestiere who arrives in turn-of-the-century Fresno to build a new life.”

“Two weeks spent in the company of these stories gives the impression of abundant energy and talent but also the lingering aftertaste of the over-prolific. A certain recurrence of general narrative shape indicates a telling reliance on formula: Colorful loser sees sexually appealing female, hatches ploy; misfire of ploy, unexpected result, moment of revelation; stir, repeat. Boyle is actually at his strongest and most moving when he veers outside his surfer/stoner ambit.”