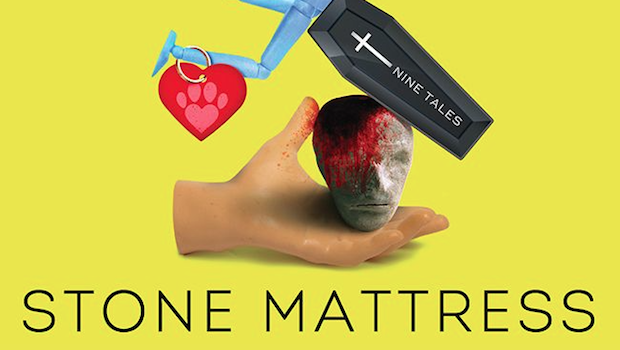 Blurb: A recently widowed fantasy writer is guided through a stormy winter evening by the voice of her late husband. An elderly lady with Charles Bonnet syndrome comes to terms with the little people she keeps seeing, while a newly formed populist group gathers to burn down her retirement residence. A woman born with a genetic abnormality is mistaken for a vampire, and a crime committed long ago is revenged in the Arctic via a 1.9 billion-year-old stromatalite. In these nine tales, Margaret Atwood ventures into the shadowland earlier explored by fabulists and concoctors of dark yarns such as Robert Louis Stevenson, Daphne du Maurier and Arthur Conan Doyle – and also by herself, in her award-winning novel Alias Grace. (Bloomsbury Publishing, August 2014)

“In Stone Mattress, her ninth volume of short stories, she’s having a high old time dancing over the dark swamps of Horror on the wings of satirical wit. She’s out for the shocked laugh, and gets it, but with elegance. Her scenes and caricatures, as accurate and vivid as those of Hogarth, are almost entirely of old age. The tales run to a general pattern: people who knew one another intimately in their twenties are brought back together in their seventies to live out the variously absurd, fantastic or dreadful aftermaths of youthful sex, illusion and crime.”

“Atwood’s trademark dark humour and withering social commentary are pervasive throughout and the stories are so stealthily plotted that I gasped at one particular denouement despite it having been clearly signposted in the story’s title.”

“Stone Mattress is filled with characters who have made their bed but are loth to lie in it – beds often tangled with a toxic mix of infidelity, envy and thwarted lust. Several characters are writers, hoping that language might transcend the deathbed and offer immortality. Indeed authorship is a pervasive theme; in one story characters crop up from Atwood’s 1993 novel The Robber Bride.”

“This more personal turn is all to the good, as it prevents Atwood from letting her intellect dry out her fiction. The characters and situations feel long-inhabited, naturally alive, and the voice is her best one: sharp, but also understanding, wry and humane.”

“Time’s impingement on individuals is evident among the book’s mainly elderly personnel. Recurrent mention of extreme ice-storms and disturbance of the polar vortex indicates that the ecosphere is also showing signs of wear and tear. What shows no sign of this is Atwood’s writing: witty verve, imaginative inventiveness and verbal sizzle vivify every page”

“What’s particularly interesting is her evident fascination with highly contemporary phenomena: online worlds and fantasy franchises; comics conventions and obsessive geekdom; ironic appreciation of the ‘bad’ and revisionist dismantling of the ‘good’.”

“It’s hard not to notice that the one male character who isn’t a sleaze is also gay. Fecklessness and infidelity are a given: when Atwood writes from a man’s point of view, it’s usually so she can hang him out to dry, as with the antique dealer, who thinks his wife will have to overlook his shortcomings because she isn’t a “hot babe”.”

Sam Baker, The Independent on Sunday

“Retribution, strong women, otherworldly happenings – all the Atwood hallmarks are here. What’s new is Atwood’s fierce and fearless take on ageing. In “I Dream of Zenia With The Bright Red Teeth”, Atwood revisits the characters of her 1993 bestseller, The Robber Bride, in their dotage … But the stars are the triptych of stories that open this collection. “Alphinland”, “Revenant” and “Dark Lady” centre around a distant love triangle from the vantage point of old age. Constance, now the wildly success”

“Atwood’s tone is enjoyably laconic, puncturing the schlocky tendencies of her chosen genre. Where a lesser writer would turn gruesome, she extends compassion; where horror lurks, she allows laughter. Masterly work. But the book is uneven, and the first 100 pages feel like an engaging but abandoned novel rather than three interconnected short stories. Luckily, the remaining six tales are wonderfully tight modern fables, and Atwood twists the knife with devastatingly casual skill.”