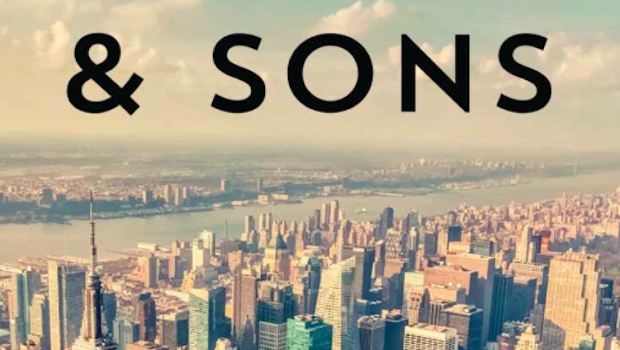 Blurb: The Manhattan funeral of Charles Henry Topping would have been a minor affair but for the identity of the eulogist: reclusive author A. N. Dyer, whose novel ‘Ampersand’ stands as a classic of teenage angst. Now Andrew Newbold Dyer takes stock of his own life, the people he’s hurt and the novel that will endure as his legacy. He realises he must reunite with his three sons before it’s too late. Eldest son Richard is a screenwriter in Californian exile. In the middle is Jamie, who has spent his life capturing the sorrow that surrounds him. And last is Andy, now a pupil at the boarding school that inspired ‘Ampersand’. It is only when the hidden purpose of the reunion comes to light do the sons realise what’s at stake – for their father, themselves and three generations of Dyers. (Fourth Estate, January 2014)

“& Sons is a sophisticated, compassionate novel, very much more than a clever take on the vicissitudes of the writing life. Funny and smart, it is lit with the kind of writing that makes the reader break into a smile; a film producer has a European accent “that seemed rucksacked to his shoulders”; a woman in a black-and-white maid’s uniform looks like she is “being swallowed whole by a leaping killer whale”. But cleverness aside, Gilbert’s book offers a reminder that all of us transform our lives into stories – and that every narrative comes at a cost.”

“It is Philip Topping who is telling us the whole story. Not narrating it in the conventional way, so much as novelising it, and doing so with a peculiarly vengeful aim in mind … You don’t have to be terribly interested in questions of narrative reliability to enjoy this aspect of the book. It is handled with such a graceful touch, and is such] an intrinsic part of the actual story (rather than just some metafictional flourish), that the reader simply accepts it: that another layer of pleasure in a book has the rare quality of being funny without being silly, serious without being solemn, and powerfully moving without being either sentimental or coercive.”

“It’s testimony to the sculpted beauty of Gilbert’s sentences, as filtered through Philip, that they incline us toward forgiveness — something we may feel the need to dispense at the novel’s halfway point. It’s there that we encounter a crucial yet crazy plot device … Fortunately, the richness and realness of the relationships Gilbert has imagined help to maintain a kind of immune system that’s naturally resistant to plot-manipulating pathogens.”

“Gilbert regularly stakes new and exciting terrain with characters that pulse through expert descriptions. Richard is one of those handsome men who pass along their genes ‘like pieces of family silver, in a pinch pawnable’. Dyer’s ex-wife, Isabel, has a face like ‘something Matisse might have sketched to infuriate Picasso’. Prosaic objects are burnished into rich imagery: used condoms litter the feet of a Central Park statue ‘like game after a successful hunt’; an ashtray resembles a pool, ‘a dozen filters bronzing themselves along its edge’.”

“Why does Gilbert – with the introduction of the plot twist we shall not reveal – insist on blowing up the vehicle upon which he was, with some degree of style, travelling? It may be a recognition of the death of the realist novel, the impossibility of writing straight fiction in the post-Infinite Jest age. It may be an attempt to forge a hybrid form, where the surreal and otherworldly can march in step with the everyday world. Whichever, it is a failure, albeit a stylish and interesting one. There is much to admire in & Sons: it is ambitious and often beautiful. If in the end the novel fizzles out, at least it dies a brave and unusual death.”

“On one level, & Sons is a conventionally gripping read … It’s all engrossing and superbly done, the characterisation alive and convincing — sprinkled with catchy image-making … But beyond this, and less convincingly, Gilbert is trying to be archly tricksy about the role of novels and fiction in the lives of these sons who have grown up seeing their observations — and sometimes even their own writing — being purloined in their father’s novels.”

“Dyer is a man who can write beautiful prose, but has had no idea how to talk to his own family, or even the world beyond his apartment. And while that tale of estrangement and reconciliation disrupted by intrigue is enough to carry the reader through 430 pages, what makes & Sons a real pleasure is its tone.”

“Gilbert has a rich theme, and plenty of talent. He has a wonderfully sharp eye for the emotional reticence of the men of A. N. Dyer’s generation and class, for the ways in which their more open, more voluble children must become expert readers of patriarchal gaps and silences, in order to make sense of what he finely calls “these heavily redacted men” … Had Gilbert concentrated his considerable novelistic intelligence on this family drama, & Sons would be a more powerful and coherent novel. Alas, he disperses his focus in a spray of subplots and false emphases.”

“The novel is smart, funny, observant and occasionally moving. It does a wonderful job of conjuring up its characters’ memories of growing up in New York City in layered, almost Proustian detail … The novel also contains some razor-edge glimpses of literary life in Manhattan, and the rarefied latitudes inhabited by old Upper East Side money. At the same time, & Sons can be long-winded and slow-footed. And its puzzlelike construction and untrustworthy narrator act as distancing mechanisms: instead of becoming fully immersed in the characters’ stories, the reader spends a lot of time assembling clues and looking for distortions.”

“The reclusive, inscrutable artist is a dreary cliché that even a splendid writer like Gilbert can’t quite transcend. A. N. Dyer can scarcely speak except in elaborate platitudes about his vocation, and no amount of agonizing exposition can account for how such a witty and (mostly) benign young man turned into such a bore … And when I tell you that Gilbert eventually introduces an actual clone of A. N. Dyer — well, you may begin to gather that a credible, coherent plot is not among this book’s strong points. But the same may be said of Hamlet, or The Catcher in the Rye for that matter, and few would dispute their greatness. I would hesitate to call Gilbert’s novel great, but it does contain a number of set pieces that, taken together, are more than worth the price of admission.”

“It is superbly written, wonderfully entertaining and often outrageously funny. But the verbal firework-display is relentless, and though all manner of dramatic things happen, there’s somehow not quite enough variation in tone … I’m left entertained yet not entirely satisfied; this is half a masterpiece, and the rest is simply another helping of the oldest-established floating crap game in New York.”

& Sons by David Gilbert The Omnivore