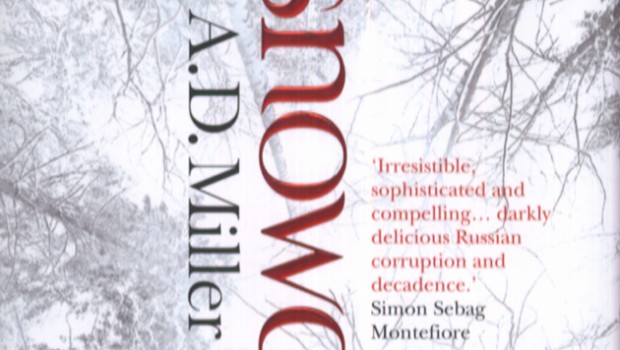 Blurb: Over the course of one winter in Moscow, a young Englishman’s moral compass is spun by the seductive opportunities revealed to him by a new Russia: a land of hedonism and desperation, corruption and kindness, magical dachas and debauched nightclubs; a place where secrets – and corpses – come to light only when the deep snows start to thaw. A chilling story of love and moral freefall, Snowdrops tells the tale of the corruption, by a corrupt society, of a corruptible young man. (Atlantic Books)

“A superlative portrait of a country in which everything has its price, Snowdrops displays a worldly confidence reminiscent of Robert Harris at his best.”

“The overriding theme is corruption and the way that morals can become corroded, but the novel is multi-layered; subtle rather than strident, and imbued with a bruised beauty… Snowdrops, in a different way, assaults all your senses with its power and poetry, and leaves you stunned and addicted. ”

“Miller offers an entirely believable portrait of a man complicit in Moscow’s moral freefall. Formerly the Moscow correspondent for The Economist, Miller brilliantly showcases the city as his novel’s strutting, charismatic star… A few infelicities suggest a greenhorn novelist. Nick’s framing confession to a fiancée we never meet seems laboured. His tragic aria of self-recrimination doesn’t quite fit his tale … But certain aspects of this otherwise disturbing and dazzling debut are unforgettable. ”

“Snowdrops is both a very good novel and a slightly disappointing one. Good, because the writing has tremendous pace and energy. (For all Nicholas’s faults, he’s amusing, compellingly honest company.) Disappointing, because it adds little to what we already know about life in Putin’s Russia… it’s equally happy reinforcing negative stereotypes and flinging casual racial abuse.”

“A stock, if compelling thriller, but two things set it apart. One is the vivid way in which Moscow becomes a central character in the narrative, a fitful city prone to unpredictable moods, like an alluring yet dangerous lover. The second is the raw honesty with which the tale is told. Both of these elements conspire to make it a fresh, unsettling page-turner.”

“Miller is absolutely wonderful at evoking the seediness and cynicism of Moscow, and he is even better at physical description … One or two niggling faults with the writing tend to detract from Miller’s otherwise beautifully rendered prose, though. The narrative is framed as a post-visit confession… a device which adds nothing to proceedings and ends up just being annoying. Also, Miller seems overly keen on foreshadowing and building up a sense of foreboding… Despite that, Snowdrops remains an impressive debut and Miller is a skilled depicter of place, character and mood.”

“Besides Chekhov’s tales of self-deception, Miller appears indebted to The Great Gatsby (nodded to in Nick’s name) and The Good Soldier, in a debut that shows him accomplished in control of narrative voice and characterisation. Yet this chronicle of a crime foretold leaves you with questions. Wouldn’t its evocation of mid-noughties Moscow work even better as nonfiction?”

“Miller, an editor at The Economist and the author of a well-received family history, The Earl of Petticoat Lane, is a competent enough writer, who achieves a clean, propulsive, vivid readability… The real difficulty with this novel is the complete spinelessness of its narrator… Platt’s amorality is not only tasteless, but unbelievable. The plot, too, is entirely predictable – almost painfully so…”