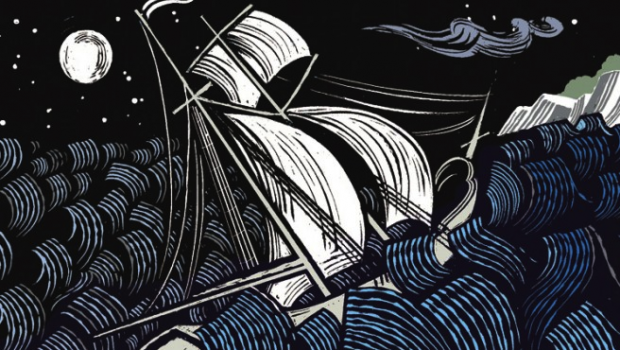 Silver: A Return to Treasure Island by Andrew Motion

Blurb: July, 1802. In the marshy eastern reaches of the Thames lies the Hispaniola, an inn kept by Jim Hawkins and his son. Young Jim spends his days roaming the mist-shrouded estuaries, running errands for his father and listening to his stories in the taproom; tales of adventures on the high seas, of curses, murder and revenge, black spots and buried treasure – and of a man with a wooden leg. Late one night, a mysterious girl named Natty arrives on the river with a request for Jim from her father – Long John Silver. (Jonathan Cape, 2012)

“The pace of Silver as an old-fashioned page-turner is fast, a required attribute for a children’s novel. It whips along like a tea clipper in a fair breeze so that at the same time as wanting to know the end, the reader doesn’t really want the story to finish.”

“In one respect Motion excels Stevenson by a long sea mile. He is better at natural description. Silver opens with Jim hunting out a wasps’ nest, which is so beautifully written I read it four times before going on. In another respect Motion falls short. Stevenson, from a family of lighthouse builders, is better at things nautical … But, like Stevenson, Motion has achieved that very difficult thing: a children’s novel that works even better for adults. Look to your laurels, Rowling.”

“Motion utilises a smooth and formal style that complements Stevenson’s own but never descends into pastiche. The narrative’s darker meditations and developments may stray more into the territory of Joseph Conrad, but in a real sense, RLS is on this voyage too: in the crow’s nest is “a Scotsman and a wisp of a fellow” also called Stevenson, who is never part of the action but always looking down from above. I think he’d approve of this rich and thrilling narrative which so ingeniously complements his own.”

“But the further Motion gets from his wonderful opening, the more the uneasy feeling grows that the novel is not quite fulfilling that initial promise. It is nothing to do with the writing, which remains assured and absorbing. The weakness is more in the plotting — or shortage of it.”

“Who, one has to ask, is the book for? Not children, I think. Silver is not the kind of modern boy’s book that Anthony Horowitz and Philip Reeves dash off with unerring panache. But nostalgic lovers of Treasure Island, who are after all legion, will devour it eagerly, enjoying the range both of faithful reference and jokey nudges, most egregiously a seaman “by the name of Mr Stevenson – a Scotsman and a wisp of a fellow, whose place was generally in the crow’s nest”.”

“The book shares many of the quirks of its predecessor. Episodic, scrappy – Stevenson wrote the first 15 chapters in 15 days, clearly patching it together from beachcombed bits and bobs of Ballantyne and Robinson Crusoe – Treasure Island is a troubling example of a novel that far exceeds the sum of its parts; like all great books, it is mysteriously self-excelling … there is perhaps a lack of psychological plausibility in Jim’s departure, and some rather earnest episodes on the island involving slaves being freed from subjugation – but there is no denying that Silver is a deeply pleasing and convivial book.”

“The inn is surrounded by misty marshes that evoke Great Expectations, and some of the descriptions of the Thames are reminiscent of Heart of Darkness. Motion uses material from both books – and Peter Pan too – alongside the original novel as his story leaps into the realm of playful literary pastiche … The pages are full of wonderful descriptions and beautiful sentences, and Silver has most of the elements necessary for a good adventure story. But there is too much knowing allusion (the flightless birds called “doo-dahs”, for example), for the reader to take the action very seriously.”

“As you would expect, Motion has a gift for the arresting phrase: the sound of a man’s snores rise like “bubbles through mud”, for example, while others lie “as quietly as fossils”. This vivid turn of phrase and sympathetic ear for atmosphere only carries one along so far, however, and Motion’s overarching plot – constrained by the style and form of its precedent, perhaps – lacks vital tension. Motion does his best with the characters, but can’t match Stevenson’s wonderfully salty creations.”

“The narrative is brocaded with dulcet-toned descriptive passages (“the rain became a slowly falling dew”) and a sensuous weave of words. But though beautifully realised, Silver is mere pinchbeck imitation … Literary pastiche of this sort often reads like the reverse of a tapestry – a frayed, ragged version of the original.”

“It’s not just that this plot is both boring and implausible, the characters as wooden as absent Silver’s leg and the sentiments screamingly anachronistic (the good guys are all 21st century liberals), but at every turn the former Poet Laureate clogs the works with verbiage. Every act of senseless violence Jim witnesses prompts a gem of cod philosophy or a reverie on his mental state and at every crisis a dreamlike inertia takes hold, as if the characters all sense that the author lacks the correct co-ordinates.”

Silver: A Return to Treasure Island by Andrew Motion The Omnivore