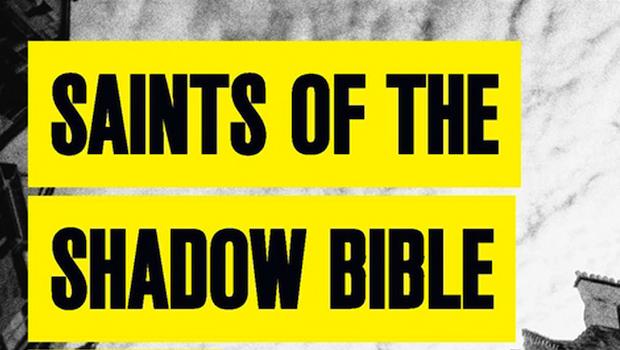 Saints of the Shadow Bible by Ian Rankin

Blurb: When a young woman is found unconscious at the wheel of her car, evidence at the scene suggests this was no ordinary crash. Especially when it turns out her boyfriend is the son of the Scottish Justice Minister and neither of them is willing to talk to the police. Meanwhile, John Rebus is back on the force, albeit with a big demotion and an even larger chip on his shoulder. A new law has been passed allowing the Scottish police to re-prosecute old crimes and a thirty-year-old case is being reopened, with Rebus and his team from back then suspected of corruption and worse. Known as ‘the Saints’, his colleagues swore a bond of mutual loyalty on something called ‘the Shadow Bible’. But with Malcolm Fox as the investigating officer – and determined to use Rebus for his own ends – the crimes of the past may not stay hidden much longer. (Orion, 2013)

“Standing in Another Man’s Grave had Rebus working for the serious crime review unit in a civilian capacity and travelling all over Scotland, but, for his 19th outing, he is back in Edinburgh, where he – and his creator – are at their best and most assured … Set against the campaigns in the runup to the referendum on Scottish independence, it is a fascinating exploration of ideas of loyalty and allegiance in a changing world, as well as a welcome return for a battered but tenacious survivor.”

“It’s a novel densely packed with incident and intrigue, and Rankin’s thriller plotting is sublime as ever, at one point even involving his other creation Malcolm Fox in an investigation-within-an-investigation scenario as he chases Rebus and Rebus chases the truth. Even more satisfyingly, given that the pair already clashed in last year’s Standing in Another Man’s Grave, OCD internal affairs cop Fox and the haphazard functional alcoholic Rebus are eventually thrown together as an odd couple double act.”

“Saints of the Shadow Bible is a clever, subtle read, but most of all, it’s a genuine pleasure to see Rebus back in the CID. (“I’m from the 80s… I’m not the newfangled touchy feely model,” he tells a suspect, irresistibly. “Now get out of my fucking car!”) It’s obvious Rankin feels the same way, relishing putting his old companion up against Fox and seeing the relationship develop, having a whale of a time finding out how he’ll cope with demotion, investigation, authority and – of course – crime.”

“It is a tribute to Rankin’s consummate skill that this complicated tale of “lying and cheating and concealing” is so streamlined. Most of it consists of dialogue and yet the plot involves plenty of violence (promised and delivered), “ugly politics”, drugs and the discovery of four corpses.”

“A richly satisfying read, with perhaps the only disappointment being the treatment of poor Fox. A more cerebral, subtle and even potentially interesting character than Rebus, he was always going to find it hard to gain traction with the latter’s legion of fans. His being reluctantly dragged into Rebus’s world and his obvious distaste for its grubby pubs and cholesterol-filled lunchtime pies is fun to witness.”

“There’s a satisfyingly detailed complexity about the police procedural plotting that few crime writers could hope to match. On top of that, mention of Rebus’s past affair with the wife of one of his former colleagues (now seriously ill) pushes him still further into the shadowlands of moral ambiguity, which is where he best belongs. I can’t say that I’m always convinced by Rebus’s hard-bitten dialogue (“Can I toss another tiny grenade into your foxhole?”), and the density of plot in the final chapters takes a bit of following and involves some hefty coincidences. If you’ve not read a Rebus novel before, you wouldn’t want to start here.”

“There is, altogether, a sense that the author just wasn’t paying attention. One plot element is explained twice, another character is introduced with a cursory “I looked him up on Google — SNP stalwart . . . face of the ‘Yes’ campaign . . .married to a lawyer called Bethany.’ Rankin has always been good at not over-explaining, letting the reader fill in the blanks, but it’s a fine balance, and a Google search and a scattering of ellipses falls thumpingly down on the wrong side. And then, just as you think you’ll give up, along come reminders of why Rankin, and Rebus, take their place at the head of the pack.”

Saints of the Shadow Bible by Ian Rankin The Omnivore