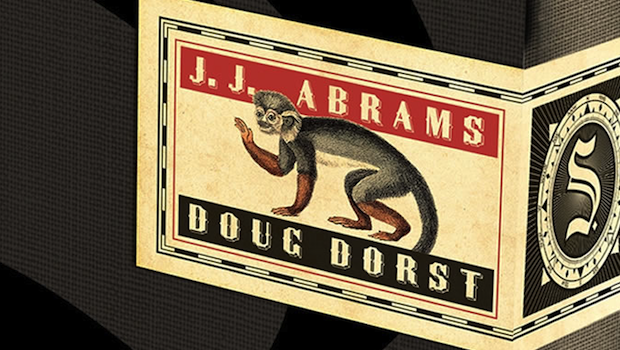 Blurb: One book. Two readers. A world of mystery, menace and desire.

A young woman picks up a book left behind by a stranger. Inside it are his margin notes, which reveal a reader entranced by the story and by its mysterious author. She responds with notes of her own, leaving the book for the stranger, and so begins an unlikely conversation that plunges them both into the unknown.

THE BOOK: Ship of Theseus, the final novel by a prolific but enigmatic writer named V. M. Straka, in which a man with no past is shanghaied onto a strange ship with a monstrous crew and launched on a disorienting and perilous journey.

THE WRITER: Straka, the incendiary and secretive subject of one of the world’s greatest mysteries, a revolutionary about whom the world knows nothing apart from the words he wrote and the rumours that swirl around him.

THE READERS: Jennifer and Eric, a college senior and a disgraced grad student, both facing crucial decisions about who they are, who they might become, and how much they’re willing to trust another person with their passions, hurts and fears.

S., conceived by filmmaker J.J. Abrams and written by award-winning novelist Doug Dorst, is the chronicle of two readers finding each other in the margins of a book and enmeshing themselves in a deadly struggle between forces they don’t understand. It is also Abrams and Dorst’s love letter to the written word. (Canongate, 2013)

“Although an electronic edition has been released, the book should clearly be experienced in its physical form, which is one of the most staggering feats of book production I have ever seen. Indeed, Abrams’s major contribution to the project is to have come up the antihistorical concept of an analogue interactive book … As viewers of the final episode of Lost know, Abrams has form in creating an addictive narrative and then disappointing at the end. And, despite delivering regular high-concept pleasures, S. is finally a brilliant piece of publishing rather than a wholly coherent rethinking of the novel.”

“Between the leaves of the book are placed items Jen steals from the archive and other bric-a-brac (a map of the campus on a paper napkin, postcards, tickets). It should be said, at this point, that the lazier kind of reader might feel that too many of their strings are being pulled simultaneously. And the damn bits of paper keep slipping out of the book on to the floor.”

“A bracingly three-dimensional reading experience, with an intricate layering of narratives resolving largely to three strands: the story of Ship of Theseus; the conspiracy theories around Straka, who, it seems, was part of a secret order of writer-agitators – “The S” – that has existed for centuries, in battle with the forces of corporate evil, and of which Ship of Theseus, Straka’s final book, may be a coded history; and the blossoming relationship between Jen and Eric, even as the enemies of The S seem to be closing in on them. In these terms, then, S. is a literary paranoia thriller, in the manner of Umberto Eco’s Foucault’s Pendulum, crossed with the postmodern high jinks of Nabokov’s Pale Fire.”

“Neither the novel nor the romance is riveting, but the whole beautifully produced package has great charm, and puts a defiant emphasis back on the book as a physical object.”

“Ship of Theseus is something of a shaggy dog story, where a protagonist S. boards a pirate ship and embarks on a number of fantastical adventures that defy space, time, and logic. Although it’s supposed to be an overlooked literary masterpiece, personally I found it pleasantly engaging rather than earth shattering. Very quickly, the tale of Eric and Jennifer in the margins begins to dominate the reader’s attention … Much like Lost, I’m not entirely convinced that the parts of S. add up in quite the way they could, but the storytelling journey along the way is certainly worth the taking.”

“Formally, it’s as creaky as the knackered old boat on which its hapless protagonist takes passage, and Dorst’s talent isn’t sufficient to keep incredulity at bay. He manages to give believable voices to Eric and Jen, the modern-day commentators, but never sells us on the essentially ridiculous thesis that they trade so much information via the book; and the Straka narrative, which tries hard for its sonorous, Conradian tone, comes across inescapably as 21st-century American demotic larded with silly ten-dollar words.”