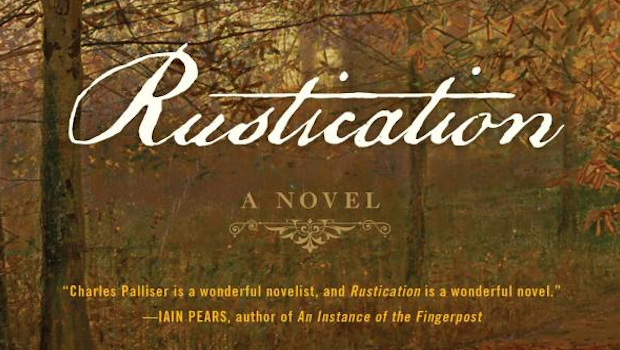 Blurb: Christmas 1863. Seventeen-year-old Richard Shenstone has been sent down from Cambridge under a cloud of suspicion. Addicted to opium and tormented by disturbing sexual desires, he finds temporary refuge in the creaking old mansion inhabited by his newly impoverished mother and his sister, Effie, whose behaviour grows increasingly bizarre. Threatening letters circulate among the locals, where almost anyone can be considered a suspect in a series of crimes and misdemeanours ranging from vivisection to murder. (W. W. Norton & Company, 2013)

“To chart the precise course taken by Rustication’s complex plot would require a small gazetteer. Red herrings naturally abound, together with a just-about-fashionable post-modern treatment which supposedly reproduces a document obtained from the ‘County Records Office’ at the fictitious town of ‘Thurchester’.  In less accomplished hands all this would be the tiniest bit tiresome, but Palliser’s hold on his narrative is enough to turn it into an exercise in pure form.”

“Shenstone is ­arguably too dim and self-absorbed a character to be an entirely satisfying narrator (it takes him 100 pages longer than the alert reader to realise that his life is in danger) but Rustication provides a twisting, mesmerising story.”

“Why, on the night of Richard’s return, is his sister, Euphemia, dressed so voluptuously? What is the real relationship between a local antiquary and the girl whom he refers to as his niece or ward? What is the truth about Mrs Shenstone’s tears and of her late husband’s frequent visits to a low tavern named the Dolphin? When they are finally presented, the answers are, like the novel itself, surprising, credible and wholly satisfying.”

“If the plot becomes a little convoluted at times, it nonetheless keeps the reader puzzling until the last moment. Palliser creates a deliciously gothic atmosphere, particularly in his descriptions of the landscape; though it feels slighter than his earlier novels, Rustication is still an enjoyable read for a misty autumn night.”

“Charles Palliser’s The Quincunx won him a cult following but Rustication is unlikely to make him a household name: Richard’s habit of leaping unfailingly to the wrong conclusion – not to mention his will-he, won’t-he attendance at the ball – begins to wear thin after a while, as does all the Gothic hokum. Nevertheless it’s worth persevering to the end: riddles are ultimately, satisfyingly unraveled and a darker reality about genteel Victorian society revealed than novelists of that era ever dared imagine.”

Rustication by Charles Palliser The Omnivore