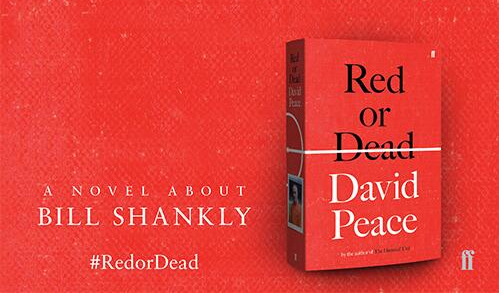 Red or Dead by David Peace

“Given that this is a novel, whether or not what Peace writes is actuality does not matter ultimately because so many readers will know the words he gives Shankly are words he would have spoken himself.”

“The first hundred pages of Red or Dead are difficult to get into. The prose is initially off-putting but gradually the reader gets in sync with what Peace is trying to do, and the staccato rhythm and cadence of the short, spiky sentences begin to reveal a bigger picture, a deeper truth. In a way this novel reminded me of a pointillist painting – individually the sentences, paragraphs and chapters don’t seem to carry much weight, but as the book progresses a passionate and intimate portrait of an obsessive character emerges. And even more than that, Red or Dead amounts to a love letter and an elegy to a kind of football, a type of character, and a way of life that no longer exist.”

“The meticulousness is part of Shankly. Although Peace does at times hint at the man’s messianic qualities, his success was routed through incremental improvement and, yes, repetition. He didn’t dream bigger than any other manager of the age, he dreamed harder.”

“Red or Dead also shares the feverish extremity and utter oddness of all of Peace’s novels … After 500 pages of this, however, the novel suddenly achieves a degree of power and poignancy when Shankly abruptly retires. It turns out that Peace’s title, which might have looked crass at first, announces a stark choice, which corresponds to the book’s two-part structure (a ­subtitle reads, “William Shankly, in two halves”) — the chapters covering the football years show Shankly as full of purpose, the others as lost and deserted. Although he is still adored by fans, his old club, eager to move on, neglects him. Without tackles to occupy him, Peace is now able to give a clearer sense of the ­historical period — the English north in the 1970s being his specialist subject — and to lend perspective to a narrative otherwise conducted in microscopic close-up.”

“Peace wants us to experience each slow step on Shankly’s trudge to glory, so he puts the reader through pages and pages of endless iteration … To Peace’s credit, this grand-scale act of mimesis, obsessed with scorecard minutiae and shot with moments of orgasmic relief, often succeeds in communicating the passionate, remorseless drive of its subject … But it’s unreasonable to expect a whole book to exist on the razor’s edge of parody, and Peace’s unrestrained desire to draw parallels between his character and another of history’s famous socialists does little to swing the balance in his favour.”

“The style, which worked so well in Peace’s Red Riding quartet, GB84and The Damned Utd grinds to a halt in too many places in Red or Dead. Long sections demand to be skim-read which is a shame because Peace is too fine a novelist to force literature down such a blind alley. One paragraph of 101 words repeats the phrase “Liverpool Football Club” eight times. Used judiciously, the technique is hypnotic. Overdone, it induces a trance … There is much that is good about Red or Dead. Peace accurately captures the footballing Darwinism that characterised Shankly’s Liverpool.”

“From the literary-theoretical angle, you can see exactly what Peace is trying to do. Rather than envisaging football as a game, or a moral paradigm, or a piece of social litmus paper, he regards it as a repetitive and at at times almost incantatory ritual, a kind of immensely stylised dance to the music of time in which the participants will always lurk in the shadow of the spectacle and everything – plot, character, psychology – is secondary to the communal impulse. Anything else – figurative language, fine writing, quiddity, the world outside – simply gets in the way.”

“ At heart, though, this is a book about football, not about politics or even about people. It ’s an encyclopaedic look at how the most successful British football club of the 20th century came to be so successful, but like an encyclopaedia, it ’s less for fun than for reference.”

“Whereas the Clough character in Peace’s The Damned Utd is marvellously subtle, funny and self-destructive, Peace’s Shankly is one-dimensional – a cardboard anti-consumerist working-class hero with a perfect marriage. A man without complexities, Shankly here is flawless. The novel’s faux-simple prose is meant to echo his straightforward character … Peace has taken 700 pages to depict a saint. Someone should have stopped him. No first novelist could have got this book published but Peace has become too big to edit.”

Red or Dead by David Peace The Omnivore