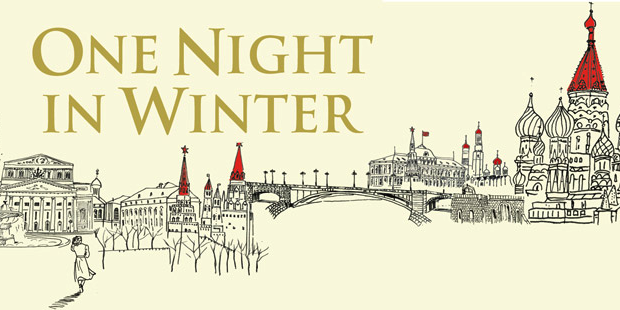 Blurb: Moscow 1945. As Stalin and his courtiers celebrate victory over Hitler, shots ring out. On a nearby bridge, a teenage boy and girl lie dead. But this is no ordinary tragedy and these are no ordinary teenagers, but the children of Russia’s most important leaders who attend the most exclusive school in Moscow. Is it murder? A suicide pact? Or a conspiracy against the state? Directed by Stalin himself, an investigation begins as children are arrested and forced to testify against their friends – and their parents. This terrifying witch-hunt soon unveils illicit love affairs and family secrets in a hidden world where the smallest mistakes will be punished with death. (Century, 2013)

“ The state security investigation into the teenagers’ deaths, which swiftly extends to the remaining Fatal Romantics and soon embroils families, teachers and passing acquaintances, is predictably terrifying — but the novel’s romantic soul tempers the terror and makes for a gripping read.”

“I opened One Night in Winter, a sort-of sequel set in Moscow in 1945, with a feeling of imminent edification, and could hardly have been more surprised. This isn’t worthy at all. It is Arthur Koestler, rewritten by Philippa Gregory – think of it as The Other Beria Girl or The Commissar’s Concubine – and it is seriously good fun. ”

“As Simon Sebag Montefiore explains in an afterword, this is based on similar real events, and certainly his ease with the setting and certain historical characters is masterly. Stalin, for instance, is not only ruthless but an enthusiastic reader, polite to his tailor and housekeeper and capable of appearing deceptively sympathetic. The NKVD boss Beria and interrogator Likhachev are less nuanced, but Montefiore is careful to shepherd the non-expert reader through the personalities and realities of the time.”

“One Night in Winter is compulsively involving and will be popular among readers who loved his earlier novel, Sashenka, and revelled in Doctor Zhivago. Nor do they need to bring much previous knowledge of Russian 20th-century history, or the ambience of the time. The author meticulously supplies both.”

“One Night in Winter is more than a recreation of history: by turns engrossing and upsetting, Sebag Montefiore makes his cast of children both hopelessly romantic – “If we cannot live with love, we choose death” – and hopelessly moving.”

“Sebag Montefiore weaves a tight and satisfying plot, delivering surprises to the last page. Stalin’s chilling charisma is brilliantly realised — the historian knows him well. Intimate with the details of the Stalinist penal system, he powerfully evokes the interrogation rituals of the Lubyanka, heightening the horror with child inmates.”

“The passages that deal with the investigation are the strongest in the book. There is the bleak formica desk, the single naked bulb. The walls are spattered with dried blood; the mattresses have urine stains. Thousands of lives have been extinguished in this place, and most victims were innocent of any crime, but because these suspects are children, innocence has a special poignancy.”

“This gripping and emotional novel is a chilling, nerve-jangling reminder of the darkest days of Communist Russia, and of the power one man can wield over a nations’ lives.”

“Sebag Montefiore wears his expertise lightly. He deftly conjures the horrors of the Lubyanka, the shifting sands of a world where you can’t even trust your wife and, most of all, the brooding sinister omniscience of Stalin. If in the end there’s not much death in this novel, there is a lot of love.”

Sigrid Rausing talks to Simon Sebag-Montefiore about Everything is Wonderful →