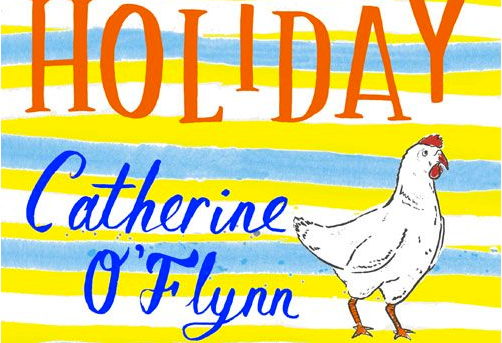 Blurb: Eamonn Lynch stares at the letter announcing the imminent arrival of his father, Dermot. His first thought is: I’ll make an excuse, I’ll put him off. But it is too late. Dermot is already here, in southern Spain, and soon he’ll discover that Eamonn lives in an unfinished building site; that Laura’s left him; and that it’ll be just the two of them, father and son, for two long, hot weeks.

Dermot doesn’t entirely recognise his son; how can he stay quite so long in bed? And where is Laura? Eamonn doesn’t seem to know quite what to make of his father’s arrival. On the other hand his neighbours – pushy and domineering Roger and Cheryl, smug but disillusioned property developers Becca and Ian – see in Dermot a respite from themselves.

Swept up in the British expats’ ceaseless barbecuing and bickering, both father and son slowly discover the truth about each other and the family past. But at the same time they uncover a shocking, unacknowledged secret at the heart of this defiant but beleaguered community. (Viking, 2013)

“With her customary gentle wry humour O’Flynn paints a wonderfully depressing portrait of expat life with its desperate barbecue parties, bickering and whiffs of adulterous sex.”

“Drowning themselves in alcohol and frying themselves at barbecues, matters go from bad to worse when they discover the development might have been built on the site of a mass grave dating from the horrors of Franco’s regime. No wonder the natives are so mad.Eamonn cannot sell up because no one will buy his apartment. Truly this is a story for our times.It takes a real talent to take circumstances such as these and turn them into a novel of such wisdom and charm but Catherine O’Flynn manages it.”

“It’s a simple story but, thanks to a balance of humour and pathos, a delightful one. The dialogue is perfectly pitched, the characters cliché-free (some achievement, considering they are mostly that type of show-offy expat we think we know so well), and every description of a weed growing through damp concrete or the things Eamonn misses about England (“John Humphrys, Pudsey Bear, smug young men with beards”) gives O’Flynn’s writing vivacity.”

“O’Flynn writes with brilliant wit and warmth about people cast adrift in contemporary wildernesses, and the resolution between father and son is surprising and satisfying.”

“Like Jonathan Coe, O’Flynn has a gift for catching recent social history in her fiction, and this is a cuttingly down-to-earth book about families, expats and the experience of being Irish in Britain in the 1970s.”

“Of the myriad characters and subplots that circle Eamonn’s story, the plight of the illegal African immigrants, some of whom wash up dead on a nearby beach, is never fully explored. They are shadows hiding in derelict buildings, good only for spooking the snotty European residents. But when she gets to the details, O’Flynn writes terrifically about disappointment and denial, skipping easily between the present and moments in Eamonn and Dermot’s past that explain how they became who they are.”

“O’Flynn is good at mild comedy, humorously illustrating idiosyncrasies in her characters as Mark Haddon and Roddy Doyle do. But whereas Haddon moved on to explore more complex relationships and a less simple prose style in The Red House, Mr Lynch’s Holiday can still feel so slight as to border on the insubstantial.”