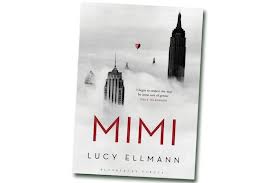 It’s Christmas Eve in Manhattan. Harrison Hanafan, noted plastic surgeon, falls on his ass. ‘Ya can’t sit there all day, buddy, looking up people’s skirts!’ chides a weird gal in a coat like a duvet. She then kindly conjures the miracle of a taxi. While recuperating with Franz Schubert, Bette Davis, and a foundling cat, Harrison adds items to his life’s work, a List of Melancholy Things (puppetry, shrimp-eating contests, Walmart…) before going back to rhinoplasties, liposuction, and the peccadilloes of his obnoxious colleagues. Then Harrison collides once more with the strangely helpful woman, Mimi, who bursts into his life with all her curves and chaos. They soon fall emphatically in love. And, as their love-making reaches a whole new kind of climax, the sweet smell of revolution is in the air.

“Ellmann’s work is characterised by a delightfully playful style, experimenting with the boundaries of form and the visual layout of writing, and is scattered with capitals and exclamation marks and italics. Here, she liberally uses italics – the full force of emotion pressed against words – as well as pages of music scores. The rich layering of literary and artistic references adds depth to this portrait of shallow lives. In exuberant, exhilarating prose that carries a substantial cargo of humour and wit, this cutting social satire anatomises an era and, by focusing on a man who alters human bodies, offers an X-ray of the curious workings of the mind.”

“Mimi, with her goddess aura (according to Harrison) and inspiring feminist wisecracks, may be the heroine of the piece, but Harrison’s voice is addictive and reassuring. He’s funny, more than a little mad and just self-aware enough to keep us on his side. There’s a childlike joy in his take on the world which feels like Woody Allen reading Dr Seuss … A wildly hilarious, modern film noir in fiction form, it’s the sort of novel you love or hate immediately. I loved every minute.”

“ For all its satire and tricksy intertextuality (not only Ant and Bee but Dickens, musical scores, fake subscription forms for you to fill in, and poems by Ellmann’s husband) this is simply a big happy book about loving women. Now that’s shocking.”

“Mimi is at its best when Ellmann uses her innovative style and light touch to highlight society’s darkest truths. In the lengthy appendix to the novel, she offers the reader a “Cacophony”. Its jumble of material includes almost four pages of headlines about violence, murder and sexual attack. They make bleak reading and this sudden, final assault is a reminder that while fairytale endings may exist, there is no escape from the reality that intrudes on even the happiest ever-afters.”

“Ellmann’s hallmark banter is fun to read but runs the risk of being a bit gimmicky: the illustrations, ever-ready puns, excerpts from a notebook enumerating Mimi’s “perimenopausal” hot flushes, the lists upon lists, including Harrison’s “list of melancholy” that he is forever adding to: “Pregnant women pushing strollers uphill like Sisyphus – just stop breeding, why don’t you?” The non-stop italics add to the occasional sensation of reading the notes for a stand-up routine. Ellmann’s idiosyncrasies are lovable and can be wickedly funny, but require some indulgence from the reader, and, if the reader is not in an indulgent mood, might start to grate.”

“Set against any hastiness or impatience in the writing is the richness in texture. References to films, operas (especially La Bohème), pieces of music (especially by Bach), artworks and poetry throng these pages. Thematic elements include the scary fairy tale of Baba Yaga and Delacroix’s painting, Liberty Leading the People, which Harrison associates with the indomitable Mimi.”

“There are more puns, punchlines, quips and wordplay than is perhaps quite wise, and if you’re allergic to exclamation marks, capitals and italics, steer clear. But even as Mimi gaily batters the reader into submission, it does so with such charm, wit and ingenuity that it’s rarely less than a delight – none of which, however, disguise the underlying anger that powers things along. ”

“Ellmann demands a lot of indulgences from her readers. Many events in Mimi are – what shall I say – far-fetched? If this book is even darker and sadder than Ellmann’s previous works it is perhaps because the world it portrays is so sick at heart. Yet Mimi is ringing with love and rage and hope.”

“There are signs throughout that Harry is fed up with the misogynist underpinnings of his job, but it’s hard to determine if his rousing feminist speech that ends the book — and the complementary manifesto included as an appendix — is a satire of conversion or an earnest call to arms. Either way, the two don’t work.”

“And then, after 182 pages of chortling, misty-eyed delight, with me recommending Mimi to anyone who would listen — catastrophe … It’s as if Ellmann panics. A sweet, sharp-edged Manhattan love comedy suddenly isn’t enough. She’s got to make things happen, and she’s got to preach about things that matter. I would urge you not to read the last third of the book, to keep your enjoyment in tact, but in case you want to get your money’s worth, I won’t reveal too much.”

“Mimi natters on about matriarchal prehistory, sounding like a comic-book version of Mary Daly: “Everything was going swell, you know, matriarchy worked! Then men took over metalworking and used it to make more and more powerful weapons … from then on it was just rape, rape, rape, war, war, war, capitalism, arrogance, slavery and wrecking the land.” Harry finds this pontificating arousing, perhaps because Mimi doesn’t blame him for any of man’s wrongs, and because she thinks the best solution is to have lots and lots of orgasms. That’s all very well for Harry, but the reader, sans erotic compensation, can’t help but notice that his “feisty gal” talks a good amount of wishful, half-baked nonsense.”

“She is renowned for her flights of fancy, explosive comedic narrative energy, and powerful rants on all sorts of subjects, and while all of these are present and correct in Mimi, I found that they tended to obfuscate the story, and led to a lack of emotional engagement. And what begins as a light-hearted romp around the borderline between romance and feminism becomes less convincing and more clunky the further it goes on.”

“You know how every protagonist of a Woody Allen film is unavoidably Woody Allen? Ellmann is a sharper observer of things than he’ll ever be, but she can get similarly stuck in a single voice; and here it proves more than a little unconvincing, given the rest of what we’re supposed to buy about her leading man … She hasn’t done enough to make Harrison seem like a real person; and that makes what purports to be his story seem more like a flimsy structure for an intellectual position that doesn’t stand much analysis.”

“A novel that reads in too many parts like a bar rant, and not an especially interesting bar rant, isn’t likely to convince many fence straddlers. Even the most earnest, moussed metrosexual might be tempted to grab a hunting rifle and head for the woods after one of the rants here. But leaving aside the question of what audience Ellmann is aiming for, surely equating such male inventions as poison gas and leaf-blowing machines is not only over the top but embarrassing. Auschwitz and the burbs are in very different time zones. This book is a mess.”

Mimi by Lucy Ellmann The Omnivore