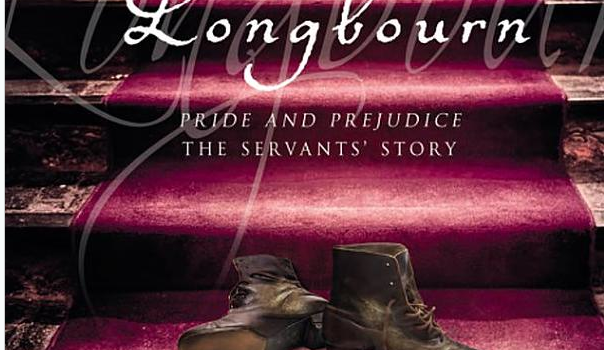 Blurb: If Elizabeth Bennet had the washing of her own petticoats, Sarah thought, she would be more careful not to trudge through muddy fields. It is wash-day for the housemaids at Longbourn House, and Sarah’s hands are chapped and bleeding. Domestic life below stairs, ruled tenderly and forcefully by Mrs Hill the housekeeper, is about to be disturbed by the arrival of a new footman smelling of the sea, and bearing secrets. For in Georgian England, there is a world the young ladies in the drawing room will never know, a world of poverty, love, and brutal war. (Doubleday, 2013)

“Like Austen, Baker has written an intoxicating love story but, also like Austen, the pleasure of her novel lies in its wit and fierce intelligence.Longbourn is a profound exploration of injustice, of poverty and dependence, of loyalty and the price of principle; running through the quiet beauty of much of Baker’s writing is the unmistakable glint of anger.”

“I was surprised to read that Baker loves P&P because this servants’ tale does not paint the Bennets in a positive light. No man is a hero to his valet, or lady to her maid, and even less so when the vulnerability, lack of prospects and absolute dependence of Austen-era servants are factored in. An angry, beautiful book.”

“The debt to Austen at such points seems insignificant; in fact, Baker adds somewhat to the original with her clever interpolations. Sarah, for instance, notices that Mr Wickham is likely to be found “lounging by the sideboard nibbling a bit of kipper and running a nail along the joins in the veneer” and that Mrs Bennet might have good reason to be addicted to Balm of Gilead. Lugubrious Mr Bennet, the passive-aggressive paterfamilias of Pride and Prejudice, is the character who crosses over into Longbourn most interestingly. Baker has built a lot around an ingenious and completely believable back-story involving him that it would be a sin to spoil.”

“Baker tackles subjects Austen could not or would not go near. She wallows in the base physicality of her characters and the grubby details of their work. She confronts brutality and scandal, the slave trade and war. The ugly truths lurking beneath the sheen of Georgian manners are baldly exposed and intensely observed.”

“Baker confronts the darker elements of 18th-century life — issues to which Austen alluded, but was unable to tackle head on. In doing so, she changes the perspective on Austen’s characters. Mr Bingley’s wealth, for instance, is built on sugar, and therefore on the slave trade. At one point, his handsome black footman mentions that Bingley took him from his mother when he was just a child and brought him to England. Suddenly, Bingley seems less squeaky clean. Austen’s caddish Mr Wickham, meanwhile, turns out to be a creepy sex pest, hanging around the kitchen, preying on the prepubescent servant, Polly.”

“Baker includes enough of the plot of Pride and Prejudice so that an Austen novice will not get lost, and an Austen lover has the satisfaction of matching the novels chapter for chapter. The parallels between the two are not subtle, but they illuminate both Austen’s novel and the precarious and circumscribed lives of 19th-century servants. Baker favours excess over subtlety in her descriptions as well as her plotting, and sometimes Longbourn feels over saturated.”

“Jo Baker, understandably, makes no attempt to emulate Austen’s style and, although she writes well, Longbourn’s language is often too demotic, a contrast that jars repeatedly (when Sarah disagrees with Mrs Hill, “she was not having it”; the rain was “p**sing it down”) until the novel hits its stride. Hit its stride Longbourn undoubtedly does, for all the end result is more Georgette Heyer than Jane Austen.”

Longbourn by Jo Baker The Omnivore