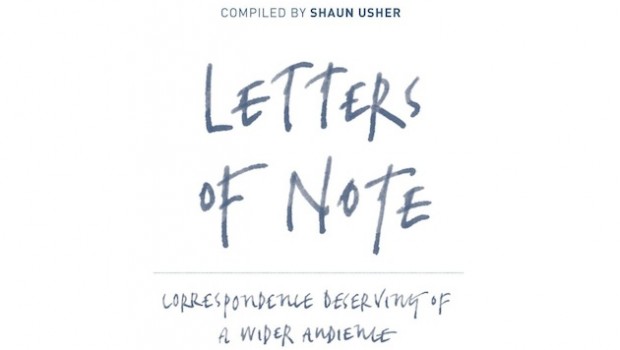 Letters of Note: Correspondence Deserving of a Wider Audience by Shaun Usher

Blurb: Letters of Note is a collection of over one hundred of the world’s most entertaining, inspiring and unusual letters, based on the seismically popular website of the same name — an online museum of correspondence visited by over 70 million people.

From Virginia Woolf’s heart-breaking suicide letter, to Queen Elizabeth II’s recipe for drop scones sent to President Eisenhower; from the first recorded use of the expression ‘OMG’ in a letter to Winston Churchill, to Gandhi’s appeal for calm to Hitler; and from Iggy Pop’s beautiful letter of advice to a troubled young fan, to Leonardo da Vinci’s remarkable job application letter, Letters of Note is a celebration of the power of written correspondence which captures the humour, seriousness, sadness and brilliance that make up all of our lives.

Letters of Note’s most intriguing correspondence – interactive | The Guardian

“The most extraordinary letters Usher reproduces are about impending death: Virginia Woolf’s suicide note, a narrative of Aldous Huxley’s last agonised days by his widow, a telegram from the sinking Titanic, and many others … Amused and amazed as I was by Usher’s other choices, I kept returning to these small tragedies and the records they left behind. Letters of Note, I think, is a book about sadness. ”

“…a  gloriously presented compilation… It includes Alabama attorney-general Bill Baxley’s 1976 response, on official headed paper, to a white supremacist’s threats (“Kiss my ass”), and Francis Crick’s letter to his 12-year-old son Michael explaining, with illustrations, his joint discovery of the “very beautiful” structure of DNA.”

“…the book contains over 100 letters in facsimile form along with their transcriptions, freeing him to indulge in the purely quirky or the compellingly fascinating… as a guide to letters that deserve a wider readership, Usher’s compilation is hard to beat.”

“This year’s Christmas gift? For sure. Yet it has also to be said that converting this online literary treat into such a traditional publishing format has stultified the letters a little, making them no longer so precious and surprising as they are when you come upon them one at a time in the midst of Twitter. A book, now? We’ve been here before. “

Letters of Note: Correspondence Deserving of a Wider Audience by Shaun Usher The Omnivore